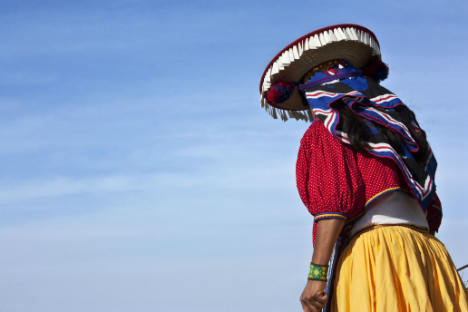 Against a backdrop of heightened tensions in the region and other worrisome developments, Wixarika leaders have filed an injunction to stop the illegal drilling in exploration for gold and silver in their ancestral sacred lands of Wirikuta.

Since March 1 of this year, the Wixarika Regional Council for the Defense of Wirikuta has been petitioning the Mexican government to intervene to stop the current exploration that is occurring in the region without the required permits, but they have received no response to date, prompting them to file the injunction in a federal court. The drilling and excavation is occurring on a wide and destructive scale, the Council said, in the sacred desert where the Wixarika or Huichol people have conducted their pilgrimages since the beginning of their history.

“We reaffirm our opposition to the mining concessions that various companies intend to develop extractive megaprojects within the sacred territory we have occupied for millennia, which is inhabited by our deities and in which we conduct our pilgrimages to recreate the origin of the world,” the Wixarika Regional Council wrote in a June 25 declaration. “Today Wirikuta is threatened by the greed for money and the remiss and illegal actions of the Mexican state.”

Also last week, Wixarika leaders decried the appointment of Hector Moreno, current mayor of the town of Real de Catorce, as president of the Board of Directors of the Wirikuta Ecological Reserve. The appointment represents “an aggression against our people and the people of the region, given the scientific evidence, which makes any new mining projects prohibitive due to the extreme overexploitation of aquifers,” the Wixarika Regional Council wrote in a June 25 bulletin.

Moreno’s financial ties to First Majestic Silver present a serious conflict of interest for a body whose aim is to protect the ecology of the region, they argued. They further accused Moreno of generating animosity against the Wixarika people, promoting rumors that the indigenous group is aspiring to gain financially by taking over the livestock and lands of the local inhabitants, an assertion they claim is entirely false and is generating a dangerous atmosphere of hostility and harassment against the Huichol people. Additionally, some Wixarika visiting the region have been threatened that they will be denied access to the lands where they have traveled to pray, leave offerings, and ceremonially hunt their sacred peyote, or hikuri, since time immemorial. These pilgrimages to Wirikuta and the use of their sacred cactus are essential to their continued cultural survival – and indeed, to the continued equilibrium of the forces of nature on the planet, according to their beliefs.

“We reject the continued tolerance of aggression against our indigenous people, threatening our traditions in the attempts to limit our consumption of hikuri if we don’t agree to the mining and agribusiness industries, as well as the threats that have been circulating that we will be refused the right to carry out our pilgrimages that we have conducted from time immemorial and that are now recognized under many national and international legal jurisdictions, as well as by our own regulatory systems.,” the Council wrote. “As we have previously denounced, in the region of Wirikuta there is a disinformation campaign waged from the Municipal Presidency of Real de Catorce, which seems aimed to create an atmosphere of confrontation and harassment against the traditional access our people have exercised from time immemorial in the sacred desert of Wirikuta.”

The Council further denounced the government’s failure to consult with the Wixárika people in the ways in which they traditionally make their decisions, through their Community Assemblies. In a regional assembly convoked on June 28 by the Wixarika Regional Council for the Defense of Wirikuta “Tamatsima Wahaa” and attended by representatives from the far-flung and remote communities of Santa Catarina Cuexcomatitlán, San Andres Cohamiata, San Sebastian Teponahuaxtlán and Tuxpan, Jalisco, and Bancos de San Hipólito, Durango, and the Wixarika Union of Ceremonial Centers of Jalisco, Durango and Nayarit, the group ratified the previous statements and further demanded that the government hold a binding consultation with the Wixarika community assemblies in the matter of another key sacred site, Haramara, where their ceremonial grounds on the Pacific Coast of Nayarit are being privatized and commercialized for a tourism project.

“We call on the federal government and in particular the President in his capacity as chief of the Mexican State to monitor and not criminalize our ancient tradition,” wrote the Council, “and to instead monitor the dangerous actions of the Municipal President of Catorce, who is inciting local people against our people and trying to limit our right to ancestral pilgrimage to the home of our ancestors, upon which depends the fundamental equilibrium of the world.”