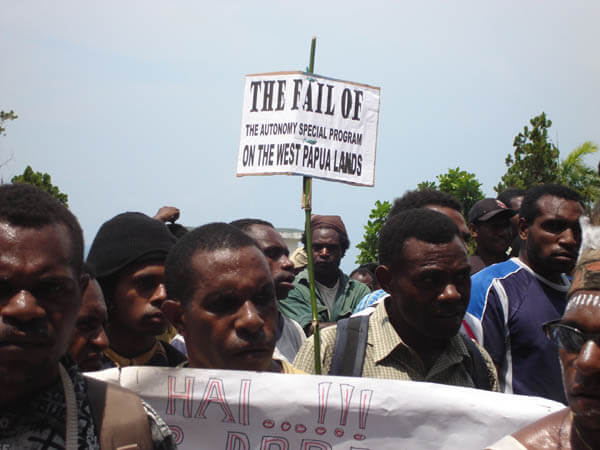 SPECIAL AUTONOMY HAS FAILED, THE INDONESIAN GOVERNMENT MUST CARRY OUT RESPECTFUL DIALOGUE WITH PAPUA

From adnki.com – More than 1,500 students on Friday gathered in front of the governors palace in Jayapura, the capital of the Indonesian province of Papua, demanding an end to the province’s special autonomy status, which they say does not work. The protestors called instead for dialogue with the government to decided the future of the province. “We want a three-way dialogue, involving Jakarta, a delegation from Papua and a representative from a neutral organisation,” said Buchtar Tabuni, 28, one of the organisers of the protest in an interview with Adnkronos International (AKI).

Papua, which is in the far east of the Indonesian archipelago, was annexed by Jakarta with a controversial referendum in 1969. (source, view more pictures from the protest)

From an April 27 Press Release by the Coalition of Students and People who Care for Papua Land:

When the spirit of reform led by the students swept the entire Nusantara archipelago, the authoritarian regime of Soeharto could not stand any longer. In relation to this, all the Papuan people did not stay silent. Having been muzzled for 39 years by the authoritarian military regime, Papuan people demand the Indonesian government the recognition of their sovereignty as a free nation, a goal which has never died since 1969 of (forced) integration. The climax was on 26 February 1999 where 100 Papuans joined in a team called Tim 100 met President BJ Habibie in the State Palace demanding the recognition of the independence.

The central government’s answer was Law No. 45/1999 dated on 4 October 1999 on the partition of Papua into three provinces: Irian Jaya (Papua), West Irian Jaya, and Central Irian Jaya. The law was rejected by the people, they occupied the governor office and the DPRD office of Papua province. The aspiration of Papuan people from all corners of Papua land to separate (from Indonesia) is getting stronger. The emergence of the aspiration of merdeka (freedom) is based 3 things; 1) The historical truths, 2) Various human rights violations and 3) Conference and Congress Papua II in 2000. The two big events reaffirmed the aspiration of separation from NKRI (the unitary state of the Republic of Indonesia). However Jakarta rejected to listen to the aspiration, its answer was the release of Special Autonomy law.

The policy of Special Autonomy for Papua Province was described in MPR’s decree No. IV on the special autonomy law of No. 21/2001. The government of the Republic of Indonesia and the Papuan political elites in the bureaucracy see it as the best solution for the prosperity of Papuan people. Has the Special Autonomy brought better life to Papuan people? The question has been left unanswered. The reality is that the Special Autonomy tells different (facts). There are facts in front of our eyes that in the era of Special Autonomy, Papua land is being smeared with the blood of the nation’s sons and daughters. Their blood and bones are pouring into this rich land.

The blood of these innocent sons and daughters of Papua began pouring into the land at the beginning of the discussion of the Special Autonomy bill at Cendrawasih stadium. At that time, thousands of students did the protest actions rejecting the bill until they were broken up. As the result, many students were badly injured or wounded and one died at that place. Angrily protesting this treatment, thousands held mass rally from the Stadium to the campus of Cendrawasih university. Ironically the government and the borjuists political Papuan elites ratified and “implement” the law.

The Special Autonomy Law has been around for six years and many human rights violations have occured during this period. Below is the face of Papua land in the era of Special Autonomy:

1. Direct Human rights violations have occured in many places through various new modes and forms. Some of the proves of human rights abuses in the era of Special Autonomy:

– The abduction and killing of Theys Hiyo Eluays on 10 November 2001 and the elimination of his driver, Aristoles Masoka.

– The bloody Timika incident triggered by INPRES No.1/ 2003 where 6 civilians were killed.

– The bloody Abepura incident on 10 May 2005 where violent actions were taken towards the protesters who supported Yusak Pakage and Philip Karma.

– The bloody Puncak Jaya caused by (military) search and operation in 2004.

– Military operation done in Puncak Jaya after the shootings on a member of Kopassus and a retired member of TNI in December 2006.

…It is sad that the perpetrators of human rights cannot be brought to trial, they have even been hailed as heros. The exploitation of natural resources by PT Freeport Indonesia continues to happen without respecting the Special Autonomy. Many of the basic rights of native Papuan are being violated and ignored. The abundant wealth of the natural resources of Papua is being robbed to feed many countries in the world whereas its people are left dying as animals.

Based on this real situation described above, we conclude that the six years implementation of Special Autonomy (OTSUS) in Papua land has failed. The failure of the OTSUS in the first place is caused by the Central Government. Therefore, on behalf of the entire Papuan people – we urge and demand that:

The Government of Republic of Indonesia immediately conduct national dialogue which is total and overall by incorporating all components of Papuan people respectfully. The Dialogue concerning the above matters in point 1 must be conducted this year, between the time of the delivery of this aspiration and 10 August 2007.

If this dialogue is conducted then we – in dignity – demand another Option.

This aspiration is delivered to the government for further action. You may hide the truth but data and facts can reveal it.