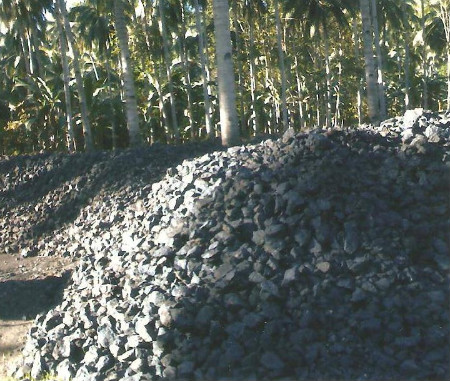 The Manggarai, Leragere and Kedang Indigenous peoples are calling on the government of Indonesia to halt all mining in East Nusa Province and conduct a genuine consultation process with communities affected by any ongoing and proposed mining projects.

One of these projects, a gold mine in Lembata, threatens to displace and severely undermine the livelihoods of up to 60,000 people.

As well, there is at least one Manggarai community suffering from a nearby Manganese mine. As Cultural Survival explains (below), miners have “dumped rocks and tailings” on lands used by the Manggarai for food and commercial purposes. “Fish from the nearly ocean are [also] no longer safe to eat.”

Used to make stainless steel, manganese can be extremely dangerous to humans. It is closely linked to Parkinson’s disease and it causes an array of health problems, including acute bronchitis, liver and kidney problems and neurological degeneration. All these problems are found in the community.

Looking to the future, the government has also issued more than 100 new mining permits to mine even more of the region’s gold and manganese, as well as copper and marble.

However, the Indigenous Peoples want to keep these resources in the ground for future generations.

Cultural Survival has started a campaign on behalf of the Manggarai, Leragere and Kedang, who are asking for the international community’s support.

Cultural Survival – Manganese mines are causing misery for the Manggarai Indigenous People on Flores Island in East Nusa Tenggara. In Kampung Sirise, dust from the enormous open pits blankets vegetation around the mine. The miners have dumped rocks and tailings on land prepared for food and commercial crops. Fish from the nearly ocean are no longer safe to eat. The Manggarai people, who live directly below the mine, now suffer from breathing difficulties. Exposure to manganese dust and fumes is especially toxic for children, who may suffer impaired motor skills and cognitive disorders. Kidney and liver problems and neurological degeneration similar to Parkinson’s disease are associated with prolonged manganese exposure.

The Manggarai women and men who work at the manganese mine in Torong Besi must squat in the blistering sun for nine hours a day, separating the black manganese from white rock. Working six days a week with no health benefits or holidays, they take home $1.20/day after transportation costs. Their only safety equipment is a mask and disposable gloves that are replaced twice a month.

One community in Torong Besi signed off on an agreement with a mining company in 2005, but they are still waiting for all that the company promised them in writing: $20,000 plus construction of a large traditional house, a road and a chapel. This community and others affected by the mine are poor; they have not shared in the wealth generated by the mines. Notably, Indonesian Corruption Watch lists East Nusa Tenggara province among the most corrupt in the nation.

The manganese mine in Torong Besi has encroached on a protected forest that is important to generations of Manggarai because it is a vital source of water and the place where they perform traditional rituals. Miners have blasted away and destroyed much of this forest and its spring. Ever since, downstream Manggarai villages have suffered severe water shortages and crop failures.

Intense community protests spurred the district government to suspend the mining company’s license and require them to obtain a permit from the Department of Forestry in accordance with Indonesia’s 1999 Forestry Law. The company, PT Sumber Jaya Asia, submitted the application but it was rejected. In fact, in January 2009 the Department of Forestry stated that the company was committing a criminal act. Nevertheless, in March a district administrative court ruled in favor of the company, in effect removing the forest’s protected status. The local government has appealed, and the Manggarai continue to voice their protests.

Other Indigenous Peoples are listening. On beautiful Lembata island, east of Flores, Leragere and Kédang peoples know what’s happening to the Manggarai. Their own water was contaminated by companies that previously came to explore barite deposits there. So three years ago, when they discovered that their district government had signed a secret agreement with PT Merukh Lembata Copper to build a new gold and copper mine, they vowed to stop the mine before it starts.

The main investor, Yusuf Merukh, claims Lembata’s gold reserves are the third largest in the world. If he is allowed to build his mine, 60,000 people will be forcefully evicted from Lembata and relocated to other islands, traumatized by social, cultural, spiritual and economic disruption and forced to occupy other peoples’ lands. Through ceremony and ritual, the Leregere and Kédang peoples have intensified their opposition to the mine. They repelled government and company officials who landed on the island. In the face of threats, stoning of their houses, arrests, and government programs of “socialization” where the benefits of mining are touted, they continue their resistance.

The Manggarai, Leragere and Kédang peoples believe our letters can help their voices reach the ears of government officials who can deliver justice. Please join in this fight for their lives and livelihoods.