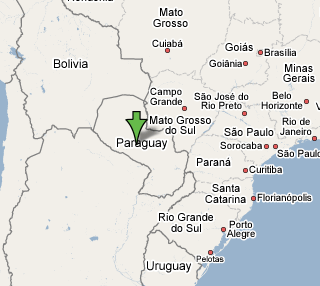 The letter campaign which focused in on the Yakye Axa People struggles to return to their Traditional Lands has just came to an end. All in all, over 17,000 letters were sent to the Paraguayan government, demanding it comply with a court order handed down by the Inter-American Human Rights Court.

In 2005 the IACHR declared that the lands in question – nearly 18,000 hectares – is the territory of the Enxert Yakye Axa and must be returned to them for free. The court also ordered the government to supply the Yakye Axa with everything they need to survive while they remain separate from their land, that they should reimburse the Yakye Axa for damages, and that the government should adopt national legislation to protect the Yakye Axa.

So far, the Paraguayan Government, who has ratified the likes of the UN International Covenants on Civil and Political Rights, and on Economic, Social and Cultural Rights, as well as ILO Convention 169 — has refused to comply to any of these orders.

Background from FIAN International – At the end of the 19th century, the non-indigenous occupation of these lands started, leading to the establishment of cattle farms. With this occupation, the indigenous peoples living in this area became employees in the cattle farms. The members of the community Yakye Axa mainly worked in the farm of Loma Verde. From this farm, they moved to the settlement of El Estribo in 1986, responding to the invitation of the inhabitants of this area and to trying to escape the exploitation suffered in Loma Verde.

Unfortunately, this change did not result in an improvement of the living conditions of the community, due to the low productivity of the land, the lack of food and the cultural marginalization. In the light of these extreme conditions, some members of the community decided 10 years later (1996) to go back to Loma Verde, that is, to the land that they claim as part of their ancestral territory. Since the access to these lands had been denied, the members of the community settled down in front of the fence surrounding Loma Verde, next to the road that links Pozo Colorado and Concepción, in the Presidente Hayes Department. It is worth underlining that these families live under extreme conditions, since the community cannot access the land claimed nor use it for the production of food or for hunting purposes. Moreover, the members of the community cannot use the road-side either, since, according to the authorities, it is a “public road-side”, in which hunting, the extraction of firewood and water, etc. are forbidden. Apart from the problems of access to land, the families of the community of Yakye Axa are not provided with the basic requirements, like adequate housing, sanitation, aqueduct, electricity, education for children, etc.

The claiming process took place before different administrative, judicial and legislative instances in Paraguay without a satisfactory sentence. As a last resort, the community Yakye Axa appealed to the Inter-American Commission on Human Rights in January 2000, which transferred the case of the community to the Inter-American Court on Human Rights. The Court produced a judgment on this case dated June 17, 2005. In this court decision the Paraguayan State was sentenced for the violation of the rights. The Court served Paraguay a note listing measures of redressal for the country to take such as identifying the traditional territory of the members of the Yakye Axa community, handing it over free of charge to the community within a maximum period of three years. While the members of the community are without land, the State should provide them immediately and continuously with the goods and basic services that they need to survive, like water, food, medical care, medicines and school materials. Also, the State should, in a reasonable period of time, adopt in the national legislation the legislative and administrative measures required to ensure the effective enjoyment of the right to property of the indigenous peoples. Furthermore, the State should pay for material damage and for costs and expenses within a year.

Despite the sentence, Paraguay has until today not complied with this sentence, and prolonged the extremely inadequate living conditions of the community members. (source)

Still want to write a letter?

In case you yourself want to send a letter, there’s no reason why you shouldn’t — Just copy the following text and send it to these emails:

With this letter I would like to make reference to the current situation suffered by the families belonging to the indigenous community of Yakye Axa in Enxet, Chaco Paraguayo, who claim their right to their ancestral lands. Since 1996 the members of the community live in front of the fence
surrounding Loma Verde, next to the road that links Pozo Colorado and Concepción, in the Presidente Hayes Department. It is worth underlining that the lands claimed by this community include the territory of the farm Loma Verde.

The case of the Yakye Axa community has been judicially solved through the sentence dating from 17 June 2005, submitted by the Inter-American Court on Human Rights. In this court decision the Paraguayan State was sentenced for the violation of the rights to a due process of law and to judicial protection, to property and to life. Among the redresses that the Paraguayan State should implement, the sentence establishes the identification of the traditional territory of the members of the Yakye Axa community and its handing over free of charge to the community within a maximum period of three years, starting from the date of notification of the sentence to the State of Paraguay on 13 July 2005. These lands are under ownership of the company Agroganadera Loma Verde S.A., and the legal representative of this company is the national senator Julio Osvaldo Domínguez. However, while the members of the community are without land, the State should provide them immediately and periodically with the goods and basic services that they need to survive, like water, food, medical care, medicines and school materials.

In spite of the orders of the Inter-American Court, the indigenous families have not received the redress established by the Court, which is of an immediate, regular and permanent nature starting from the date of notification of the sentence. For this reason, the members of the Yakye Axa
community still live in a situation of extreme vulnerability, their right to adequate food being constantly threatened and, thus, their survival, since they cannot make use of their territory, which prevents them from food production.

In the light of the above mentioned data and according to the obligations contracted by the Paraguayan State through the ICESCR and the ILO Convention 169 concerning Indigenous and Tribal Peoples in Independent Countries, ratified by Paraguay according to Law 234/93, the State
of Paraguay should respect, protect and fulfill these rights, among them the right to food. Considering the obligations imposed by the international human rights law on Paraguay and the sentence dating from June 17, 2005, submitted by the Inter-American Court, I would like to kindly ask you to:

-provide the members of the Yakye Axa community with the basic goods and services mentioned in the sentence; and

-adopt the measures required to comply with the sentence in the period and way established, especially regarding those orders on the handing over of the traditional land of the Yakye Axa community; and

-implement preventive measures for protection after the finalization of the procedures to this effect.

Please keep me informed of any measure you may take.