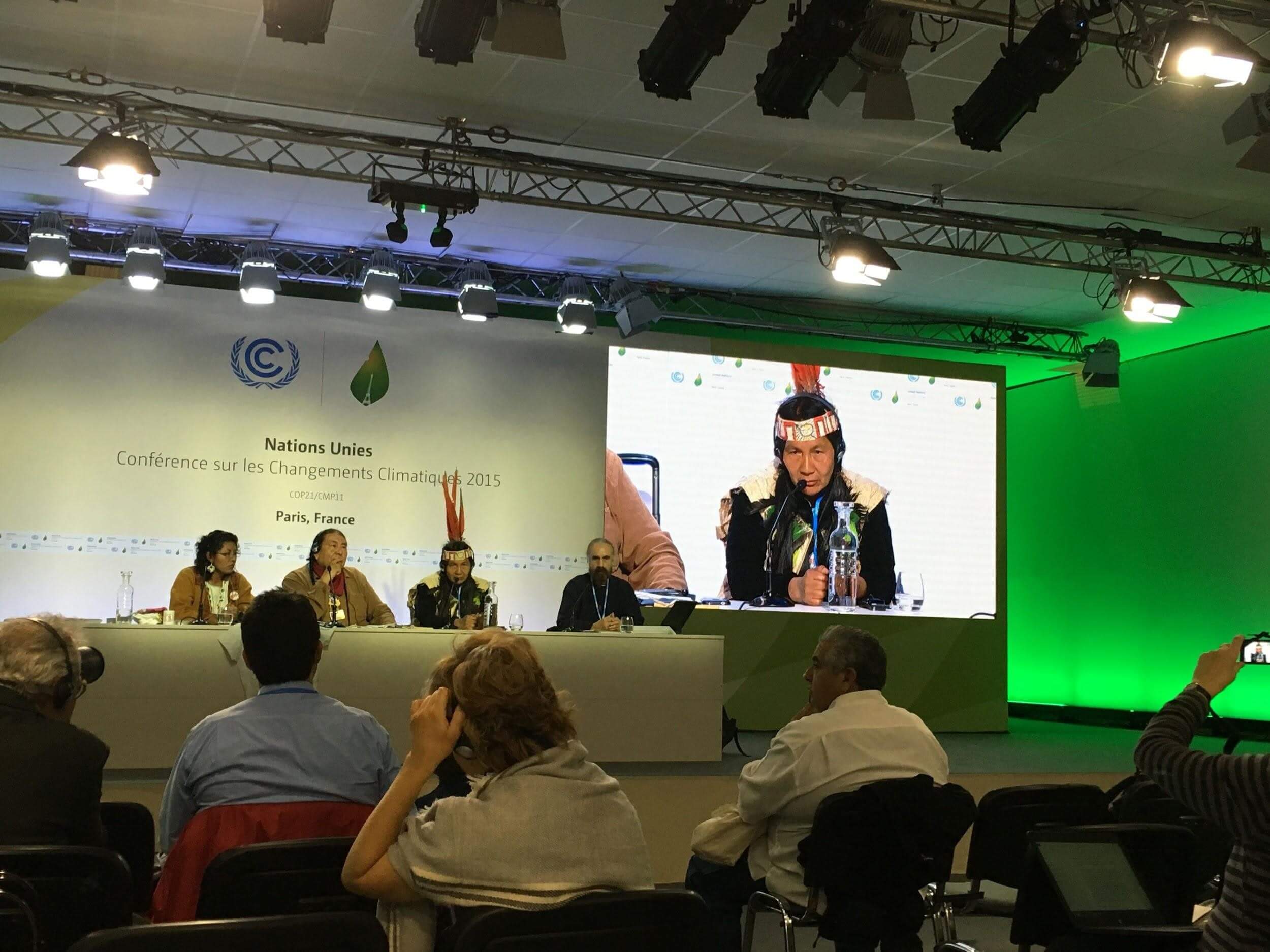 Indigenous Rights Cut from Paris Agreement: Why It Concerns Us All

Tom Goldtooth of IEN and other Indigenous leaders speak at a COP21 press conference. Photo by Roopali Phadke
Support our journalism. Become a Patron!

On December 12 at the 2015 United Nations Climate Change Conference (COP21), the world watched as a packed hall of negotiators celebrated the adoption of the Paris Agreement as an historic turning point in the international effort to stop climate change. But while delegates congratulated themselves on coming to consensus over the new international plan for long-term climate management, some outside observers were left questioning why their input was notably excluded from the final agreement.

Many of the strongest critiques have been from Indigenous Peoples who, along with being one of the populations most vulnerable to climate change, have been the Earth’s staunchest defenders for generations. Despite the vocal presence of Indigenous groups throughout COP21, pressure from the United States, the European Union, and Norwegian delegates caused reference to the “rights of Indigenous peoples” to be cut from the binding portion of the Paris Agreement, relegating the only mention of Indigenous rights to the purely aspirational preamble.

“Indigenous Peoples saw the Climate Change Conference in Paris as an opportunity to push for stronger human rights wording not only in the preamble but also in the various articles of the agreement to ensure respect for Indigenous Peoples’ rights,” said UN Permanent Forum on Indigenous Issues (UNPFII) Chair Megan Davis following COP21. “Sadly, the agreement asks States to merely consider their human rights obligations, rather than comply with them.”

Tom Goldtooth of IEN and other Indigenous leaders speak at a COP21 press conference. Photo by Roopali Phadke

This exclusion is a significant blow to Indigenous Peoples and a detriment to the treaty as a whole. It is yet another example of the UN’s refusal to recognize the role of Indigenous knowledge and practices in mitigating climate change.

Disappointing as it is, this decision was somewhat expected by groups like the Indigenous Environmental Network (IEN), a grassroots organization working for environmental and economic justice based in Bemidji, Minnesota. They have long spoken about the failures of the UN process and the environmental movement as a whole, which has not acknowledged the voice of Indigenous Peoples, catering instead to corporate, big-money interests.

“To be absolutely frank, our organization and me personally, I’m not surprised that our rights as Indigenous Peoples are one of the most contentious and the ones that get left out of the agreement,” said Dallas Goldtooth, an organizer for IEN. “It just goes to show that our political leaders are not truly concerned about the value of human diversity, human life or mother earth — they’re concerned about maintaining business as usual.”

Groups like IEN hoped to use COP21 as an opportunity to lobby for Indigenous rights, holding demonstrations and press conferences across Paris, including an all-Indigenous flotilla on the Seine River and a staged action at the COP21 Solutions Concert that was shut down by event organizers. These performative actions were meant to draw attention to the strong presence of Indigenous Peoples at COP21 and to demonstrate their investment in creating solutions to climate change.

Indigenous Peoples participated in the Paris conference in every way they could. A few Indigenous leaders were allowed to enter the COP21 negotiations, representing the International Indigenous Peoples’ Forum on Climate Change (IIPFCC), while others were present in the official negotiating space known as the Blue Zone, giving press conferences and meeting with United Nations Framework Convention on Climate Change (UNFCCC) delegates.

However, as their exclusion from the final agreement demonstrates, competition with 195 UNFCCC member states and other powerful actors involved in the negotiations severely limits the possibilities for Indigenous participation within these official spaces. Throughout the history of climate negotiations, Indigenous Peoples have had to fight just to be mentioned in international agreements and rarely with any guarantee of tangible action or binding commitment from the parties, their inclusion largely serving as nothing more than an empty gesture by the UNFCCC.

Instead, most Indigenous actions at COP21 took place in the Green Zone, the designated public venue, or other informal spaces around Paris where the full range of Indigenous perspectives could be represented for the world to see and hear. As an observer at COP21 exploring the various civil society groups present in the Green Zone, it was obvious to me that the Indigenous Pavilion was by far the most well-coordinated. Over the course of five days at this venue, I along with sizeable audiences of reporters and other observers was fortunate to hear numerous impassioned and compelling arguments for climate action made by the world’s Indigenous communities.

Many of these presentations ended with a call for delegates to take notice of Indigenous Peoples at the conference and protect their rights within the Paris Agreement. Unfortunately, despite the hundreds of flashing cameras and microphones forced into the faces of Indigenous speakers, this call was not recognized by COP21 delegates, who were busy erasing Indigenous rights from the Paris Agreement. Instead, these events were largely reduced to superficial representations by the media, who eagerly captured images of Indigenous Peoples dressed in traditional clothing or performing customary ceremonies but were much less interested in helping deliver their message to the world.

Having had the chance to observe many of the Indigenous actions at COP21, it was clear that they made the most out of every opportunity to use this international platform to advocate for their communities and the lands they depend on. But despite their tireless efforts in both the Green and Blue zones, Indigenous groups could only watch as their rights and sovereignty were ignored within another international climate agreement and wonder what more they can do.

“We are keenly disappointed that the parties did not see fit to accommodate this request in which we joined with a broad constituency,” said Frank Ettawageshik of the IIPFCC during a COP21 Closing Plenary. “We are sovereign governments with international treaties and rights to land territories, and resources toward which we have a sacred duty which we intend to fulfill.”

The time is long past for the UNFCCC to recognize Indigenous Peoples’ unwavering commitment to stopping global climate change despite years of disappointing results. Its refusal to acknowledge Indigenous groups in international climate agreements not only violates their rights as sovereign nations, it deprives the world of valuable allies possessing knowledge and solutions that could help address climate change, the greatest challenge humanity has ever faced. 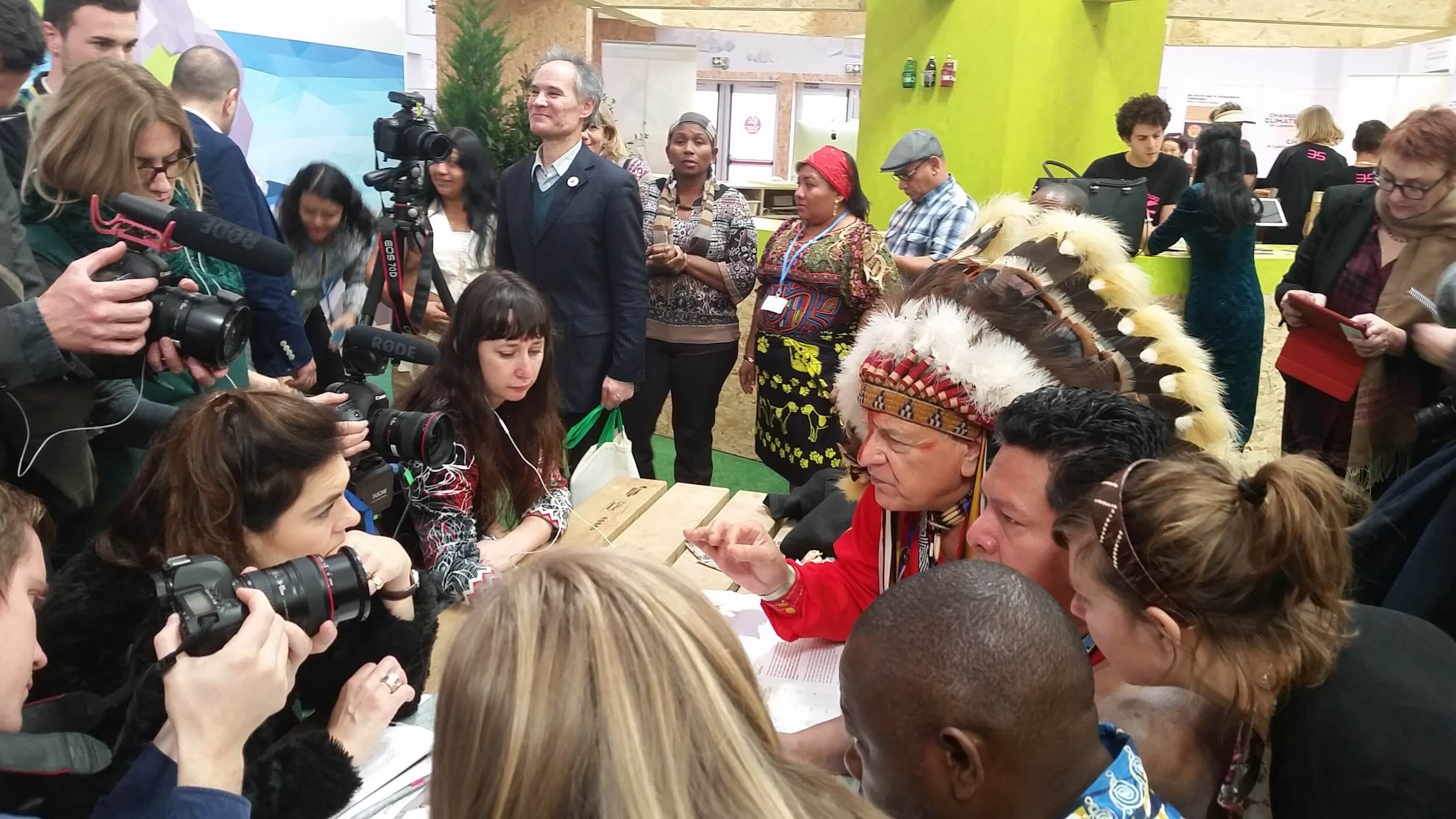 At a press conference held around a picnic table in the Green Zone, Indigenous leaders from Africa, Asia, and Latin America presented a document to a small group of reporters and interested observers revealing that over 20 percent of carbon stored in the world’s tropical forests is contained within Indigenous territories. It also demonstrated that, provided with land titles and adequate resources, Indigenous groups are far more effective protectors of these important carbon sinks than anyone else.

Instead of using this information in the effort to protect our world’s forests, a problem that the UNFCCC has been working to address for decades, the Paris Agreement reaffirmed a global commitment to Reducing Emissions from Deforestation and Forest Degradation (REDD+). An initiative that seeks to mobilize carbon markets as a means of conserving forests, REDD+ has been widely criticized by Indigenous groups as a violation of the sovereignty and sacredness of their lands. Developed with hardly any input from Indigenous communities and coupled with the Paris Agreement’s exclusion of Indigenous rights, REDD+ could have disastrous implications for the lands and livelihoods of Indigenous Peoples.

Rather than lifting up those who have been pushed down for generations, who have lived on the frontline of oppression and climate change, the Paris Agreement opted to hock their lands up for profit, to attach monetary value to forests the UN had no claim to, all in an effort to utilize the market for forest preservation. Yet again, UN negotiators privileged corporate interests seeking to capitalize on climate change over the voices of those who have served as Earth’s protectors for generations.

Fortunately, spectacles like COP21 are not the only spaces in which progress can happen. In Ecuador and Bolivia, two nations with large, politically active Indigenous populations, Nature has been granted its own basic constitutional rights. In those countries, citizens can fight corporations on behalf of the Land, now a legal entity, and have been quite successful so far. In Guyana, Indigenous communities are using GPS and drone technology to independently map and monitor their lands, while petitioning the government for legal title to their ancestral territory. Indigenous Peoples worldwide are demonstrating that they don’t need to rely on UN processes to create systems that serve both communities and natural ecosystems. Even after having their rights slashed from the Paris Agreement, Indigenous Peoples continue to set an example for the world to follow of how we can all take action on climate change by finding community-based solutions to transform the lands we call home. If the UNFCCC will not recognize the groups most invested in creating solutions to this global calamity, we must work to act on the knowledge we possess within the spaces in which the people have a voice, independent of any international climate agreement.