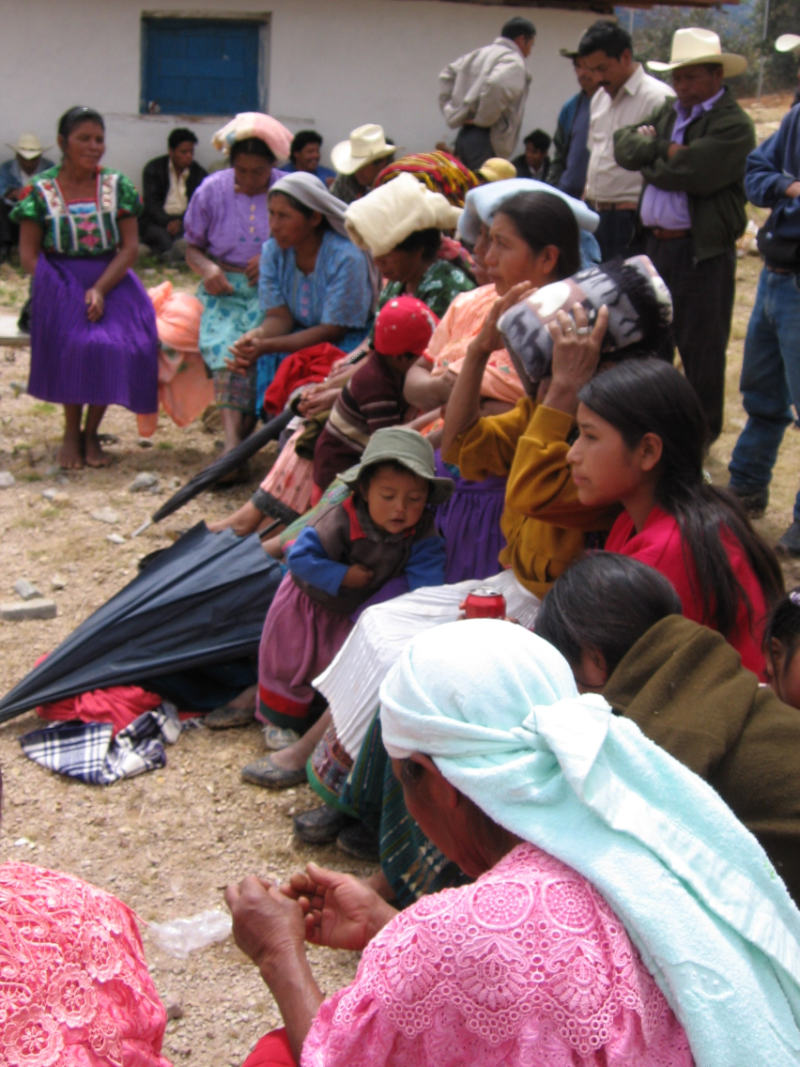 On February 28, 2011, approximately 50 Indigenous men and women from Mayan communities affected by Goldcorp’s Marlin Gold mine in San Marcos, Guatemala, were attacked and taken hostage by a group of individuals said to have “strong ties” to the Vancouver-based mining company.

Update: According to latest reports, all the Mayan’s were released sometime last night. Please see the comments below for more details.

TO THE NATIONAL AND INTERNATIONAL COMMUNITY

FIRST: Today, on February 28, 2011, communities took action to pressure the government of Guatemala to carry out the Precautionary Measures MC-260-07 granted by the Inter-American Commission on Human Rights, which include the temporary suspension of the Marlin mine. The action consisted in peacefully blocking the main routes used by the company* in a way that respects the Constitution of our country, in which we have the right to protest.

SECOND: When the blockade began, a group of approximately 20 people assaulted Miguel Bamaca, despite the fact that the Presidential Human Rights Commission has granted him protectiv measures. Miguel Bamaca was beaten mercilessly by a family known as the Mejia family, together with neighbours who work for the company. These people have strong ties to the company and also to illegal business activities. This incident occurred at four thirty in the afternoon in a location known as Siete Platos.

THIRD: On the way back, near the community of San Jose Ixcaniche, approximately 70 members of this community intercepted the bus and began to assault various people who were travelling in the bus. Among them, our comrade Aniseto Lopez and others were beaten without being able to defend themselves. The attackers came armed with guns, stones, knives, sticks, and other weapons. Right now, approximately 50 people are kidnapped and being threatened by the community of San Jose Ixcaniche and the Mejia family.

FOR ALL OF THE ABOVE:

* We ask the International Community for timely support in the face of this terrible violation of human rights.

* We denounce the horrible practice of the mining company* that manipulates its workers and places them in confrontation with the communities legally defending a right.

* We reject this practice created by the company by ordering its workers to take 60 people hostage.

We ask the IACHR to maintain its vigilance and to request of the State of Guatemala the strict respect of human rights, and particularly those of Peoples and communities.

* Translator’s Note: This is an unofficial translation of the original communique in Spanish. The mining company to which the communique refers is a Guatemalan subsidiary of the Canadian corporation Goldcorp, based in Vancouver, BC.

Here are two letters I drafted quickly in response. Feel free to copy-paste the first, and send it to Goldcorp (addresses included). Then forward it to the government and, if you like, include the second letter I include below.

I am very concerned with the events I’ve just heard of, that occurred on February 28, 2011, near the site of your Marlin Mine, in Guatemala.

I understand that an outbreak of violence occurred this afternoon against a group of primarily Mayan-Man campesinos, peacefully protesting the fact that neither your company nor the government of Guatemala has yet complied with a May 2010 order from the Inter-American Commission of Human Rights to suspend Goldcorp’s mining operation.

Miguel Angel Bámaca and Aniseto López were beaten and threatened with lynching; one bus including approximately 40 men and women have been illegally detained and some beaten in the community of San José Ixcaniche. I am deeply concerned that the lives of these individuals who remain detained are at enormous risk.

Whether or not your mining operation is directly linked to this latest bout of violence, the indirect link is clear, and I await your response on how you are mitigating this violent situation. Further, I am joining the chorus of voices within Guatemala and international who are calling for a suspension of the Marlin Mine.

Forward the above letter to Leeann McKechnie, Canada’s ambassador to Guatemala, who can be reached at:

Please find below the email I have sent to Goldcorp, expressing my concern over the violence a number of peaceful protesters near the Marlin Mine faced on February 28, 2011. They were protesting the fact that neither the company nor the government of Guatemala has yet complied with a May 2010 order from the Inter-American Commission of Human Rights to suspend Goldcorp’s mining operation.

Immediately following their peaceful protest, Miguel Angel Bámaca and Aniseto López were beaten and threatened with lynching; and one bus including approximately 40 men and women was illegally detained in the community of San José Ixcaniche. I am deeply concerned that the lives of these individuals who remain detained are at enormous risk.

In addition to my concern for these individuals’ personal safety, I am shocked and dismayed by the failure of your embassy, and of the Canadian government at large to urge this Canadian company to comply with the May 2010 order from the Inter-American Commission of Human Rights.

I await your response on how you are working to ensure the safety of these peaceful campesinos. Further, I ask that you join the chorus of voices both within Guatemala and internationally who are calling for a suspension of the Marlin Mine.