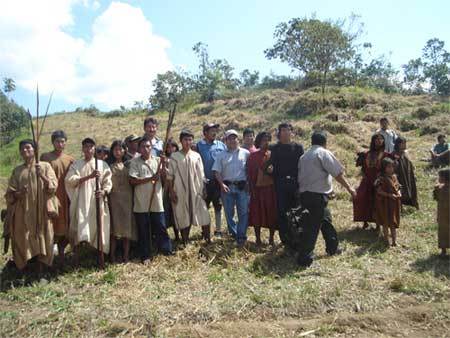 Marking the International Day of the World’s Indigenous Peoples, on Saturday, August 9th, Indigenous Peruvians launched an indefinite, state-wide protest against a set of new government policies that threaten their collective land rights.

“In the southern Amazonian province of Cusco, hundreds of indigenous protesters occupied Lot 56 of the controversial Camisea gas field, forcing the company to cease extraction there. Argentine company Pluspetrol, which operates the field, evacuated its workers from the site,” writes the activist group, Root force.

Meanwhile, in the province of Amazonas, thousands took over the Aramango hydroelectric plant near Muyo; in Daten del Marañon, 150 gathered at an oil pumping station; and several roads were reported to have been blocked throughout the country.

Through the Interethnic Association for the Development of the Peruvian Amazon (AIDESEP), a national indigenous organization, the protesters are demanding negotiations with the President, the Prime Minister, and the head of Congress.

According to American Zapatista they want the government to revoke Law #1073 and the 38 decrees being legislated for the new Free Trade Agreement with the United States. The decrees effectively legalize a mass takeover of the Amazon, threatening not only their traditional territories but their cultures and livelihoods.

They also want the hydrocarbon, natural gas, mining and forestry concessions in their territories nullified, and for the government to “re-establish [their] inalienable collective rights to [their] territories, as established in the Constitution in 1979,” to “comply with Convention 169 of the International Labour Organisation, and comply with other demands of the country’s indigenous peoples.”

The government says they will not consider negotiating until the protests end.