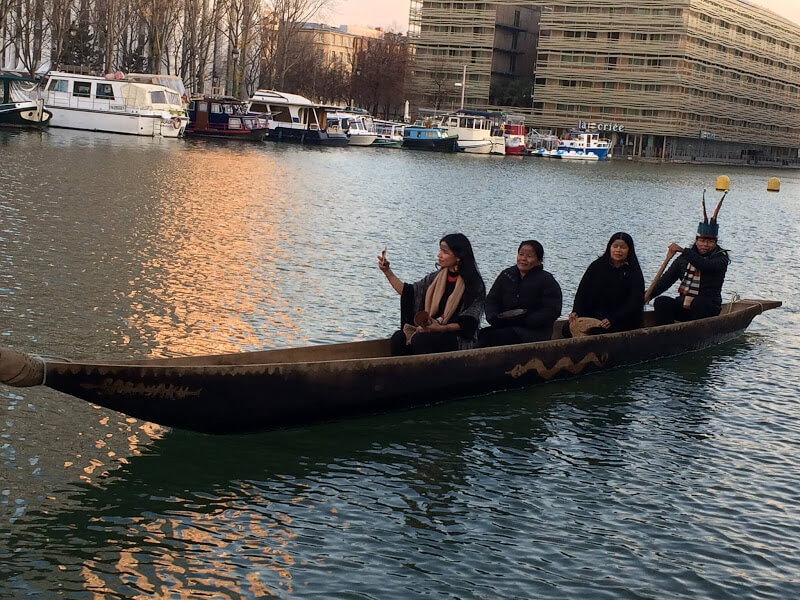 Indigenous Peoples vs. the specter of oil-driven development

It was the end of 2015. Amid the uproar raised by the COP21 in Paris, the French capital received an unusual present. A wooden canoe carrying a message from a living forest had been set afloat connecting the Seine to the waters of the Atlantic, all the way back into the Amazon. The message was clear, yet no one would listen.

As an unofficial side event during the major UN-led Climate Summit, the Kichwa community of Sarayaku — long regarded as the cornerstone of resistance against resource extraction in Ecuador’s Amazon — had organized themselves to deliver what they considered the cry of outrage from Pacha Mama (Mother Earth). Although ignored by many, the action went far beyond mere symbolism.

For indigenous communities of the Amazon the jungle is alive, and humans are part of a larger web of interconnected beings. Theirs is a conception of life that rejects Nature’s exploitation but rather nurtures life in harmony with it. The tiny canoe thus epitomized the continuation of a series of confrontations from various indigenous communities in the battle for asserting their rights and ways of life as well as their tireless defense of the planet.

In recent years, these Indigenous Peoples, along with social movement leaders from across Ecuador, have been coming together in a communal effort to oppose further oil exploitation. IC Magazine reached out to some of these leaders in the Ecuadorian capital to provide a glimpse of the ongoing struggles for indigenous rights and the latent fears caused by what the government sees as the quest for ‘development.’

A living forest and the clash of two worlds

For most Westerners, images of indigenous life in the Amazon are often tinged with idyllic and sometimes racist stereotypes. In Ecuador, for most mestizo and urban populations, this is no exception. The widespread modern notion of humans as owners of Nature seems to be at the source of such misunderstanding.

This asymmetrical divide between humans and nature stands in stark contrast to the worldview of Indigenous Peoples, or — to adapt the term to their practices and engagement with Nature — to their own cosmovivencia.

Temporarily settled in Quito in his capacity as national coordinator of indigenous Pachakutik party, Marlon Santi, former leader of Sarayaku, explains this in terms of mutual interdependence and interconnection. “The jungle for us is regarded as a living being,” Santi tells us, “which comprises many more lives in which humans are only a part of.”

As this indigenous leader puts it, being the owner of Nature is an egocentric and greedy Western attitude. According to the teachings of his ancestors, the Kichwa must always ask for permission to approach the jungle or Kawsak Sacha — “living jungle” in his mother tongue. And they may only enter thankfully and with utmost respect.

Reflecting on the ephemeral human nature and fearing the world we might be leaving to future generations, Santi emphasizes: “They might own Nature, but what they don’t know is that while owning, rather than caring, they have deteriorated it and today there are serious consequences in the world.” He knows this from experience.

By “them” Santi refers to the Ecuadorean government, along with multinational oil companies, that prey on their natural resources. In the past, the State had allowed some of them — the Argentine Compañía General de Combustibles in partnership with American ConocoPhillips/Burlington Resources — to arbitrarily enter  Sarayaku’s communal territory causing damaging long-lasting effects.

“When they implemented the oil industry in our territories, they broke the harmony of village life and our harmonious coexistence with Nature,” he told IC Magazine. The state-sponsored expansion of oil extraction activities in the rainforest has been long legitimized by the banner of ‘development.’ Yet, how can ‘development’ be attained at the expense of what indigenous groups see as a direct attack on Mother Nature? Ecuador’s recent political landscape provides insights into this ongoing paradox.

Beyond Ecuador’s ‘Rights of Nature’

Forced to give into the pressure of various indigenous communities, whose resistance efforts had put the dangers threatening the Amazon rainforest on the map, in 2007, Ecuadorian President Rafael Correa launched what many considered a bold project to preserve the Amazon rainforest: the Yasuní Initiative. In exchange for financial contributions from the international community, Ecuador would keep its vast oil reserves underground.

A new paradigm seemed to be under way when, two years later, the country also became the first to enshrine the Rights of Nature in its constitution. It was a courageous move that was greatly influenced and fueled by indigenous conceptions of life and their articulation into the political lexicon of Ecuador’s day-to-day politics.

Yet, while these were certainly indigenous victories to be celebrated, recent developments have been unearthing the true nature of the Correa administration.

In the same year that the Inter American Court ruled in favor of the people of Sarayaku — who had sued the State demanding reparations for the unconsented and forced entry of foreign oil companies into its ancestral territory — the Yasuní Initiative reached a dead end. Correa announced in 2012 that further oil exploitation is vital for the country’s development.

Ecuador had chosen “progress” — a.k.a. extractivism — at the expense of various indigenous groups committed to keeping their forests and ancestral territories pollution-free. Yet, a realization that afflicts these peoples and environment activists across the country is that beyond the misinterpretation of indigenous notions, used as “concepts” in traditional politics, lies a series of contradictions towards their incommensurable conception of life.

Latent fears and the long road ahead

Even though Ecuador is a plurinational state whose constitution legally guarantees rights to self-determination, including to ancestral territories, there is still a large gap between theory and practice. The case of the Sarayaku community is once again illustrative. Since its notorious legal victory in 2012, the government has not been able to fully honor the court’s ruling.

According to Marlon Santi, the State had to generate a comprehensive legal framework for prior consultations in the future, yet it has only reluctantly issued a vague decree on the topic and has still to remove one and a half tons of explosives buried inside the Sarayaku territory, a shameful souvenir from past exploration activities. The goal, he says, is to make the veto rights to which Indigenous peoples are entitled finally effective.

For many observers, Ecuador’s current economic crisis lies at the core of this renewed extractivist turn. This is the case of Alexandra Almeida, member of ecologist NGO Accion Ecológica, for whom the general drop in oil industry prices, along with the fixed tariffs embedded in the new service contracts due to oil companies, is leaving Ecuador with rising economic losses and social projects in the Amazon region being unfunded.

The last of such contracts have been signed with Chinese state-run Andes Petroleum for blocks 79 and 83, which cover a majority of the Sápara territory, another indigenous community that has followed suit by standing up to the oil-driven actions of the state.

“One would think that amid this dim economic scenario the government would reconsider its actions,” Almeida adds, “yet further concessions have continued to be promoted.”

Ecuador’s Amazon is roughly divided between the already polluted North, and the Center-South region continuously threatened by further oil concessions. Given the failure of the last 11th Round Oil Action in 2013, the latent fear for indigenous communities is that the plans to auction off several more oil concessions will finally materialize at the end of this year. This would put the lands of the Sarayaku, the Achuar and other Indigenous Peoples at further peril.

Since the cancellation of the Yasuní Initiative, various social movements have joined indigenous voices and gained ground against further oil exploitation. One of the most outspoken has been the Yasunidos youth collective, which gained notoriety after a failed attempt to trigger a national referendum on the renewed extractivist policies backed by president Correa.

For Pato Chavez, one of Yasunidos’ founding members, the government’s ongoing intimidations have not impeded further protests. In May this year, his collective joined a wave of actions to break free from fossil fuels and symbolically stormed the Pacific Refinery — a major petrochemical complex under construction — proving that an end to the extractivist actions in Ecuador are not yet out of sight.

After the denial of the referendum, which his collective continues to see as a sign of Ecuador’s extinction of democracy, Chavez came to recognize the importance of bringing the issue of indigenous communities in voluntary isolation to the table. He explains that, “Our work centers first and foremost in making public the existence of these groups”as part of the collective’s renewed focus among urban populations.

While they are not alone in their efforts to correct the imbalance the oil industry has caused, the State, in the meantime, has managed to expropriate indigenous notions such as Sumak Kawsay — good living — as a machiavellian justification in its quest for ‘development.’ A foreign notion that sadly keeps the oil drilling in Ecuador alive.

In this asymmetrical battle between corporate oil interests and indigenous communities, what the government does not know, however, is that along with the Sarayaku and all other Indigenous Peoples threatened in Ecuador, their approach to Nature is profoundly challenging the Western world politically, legally, and philosophically. Theirs is one that will remain vigilant, spreading word of the true connection to Nature that we all depend on.