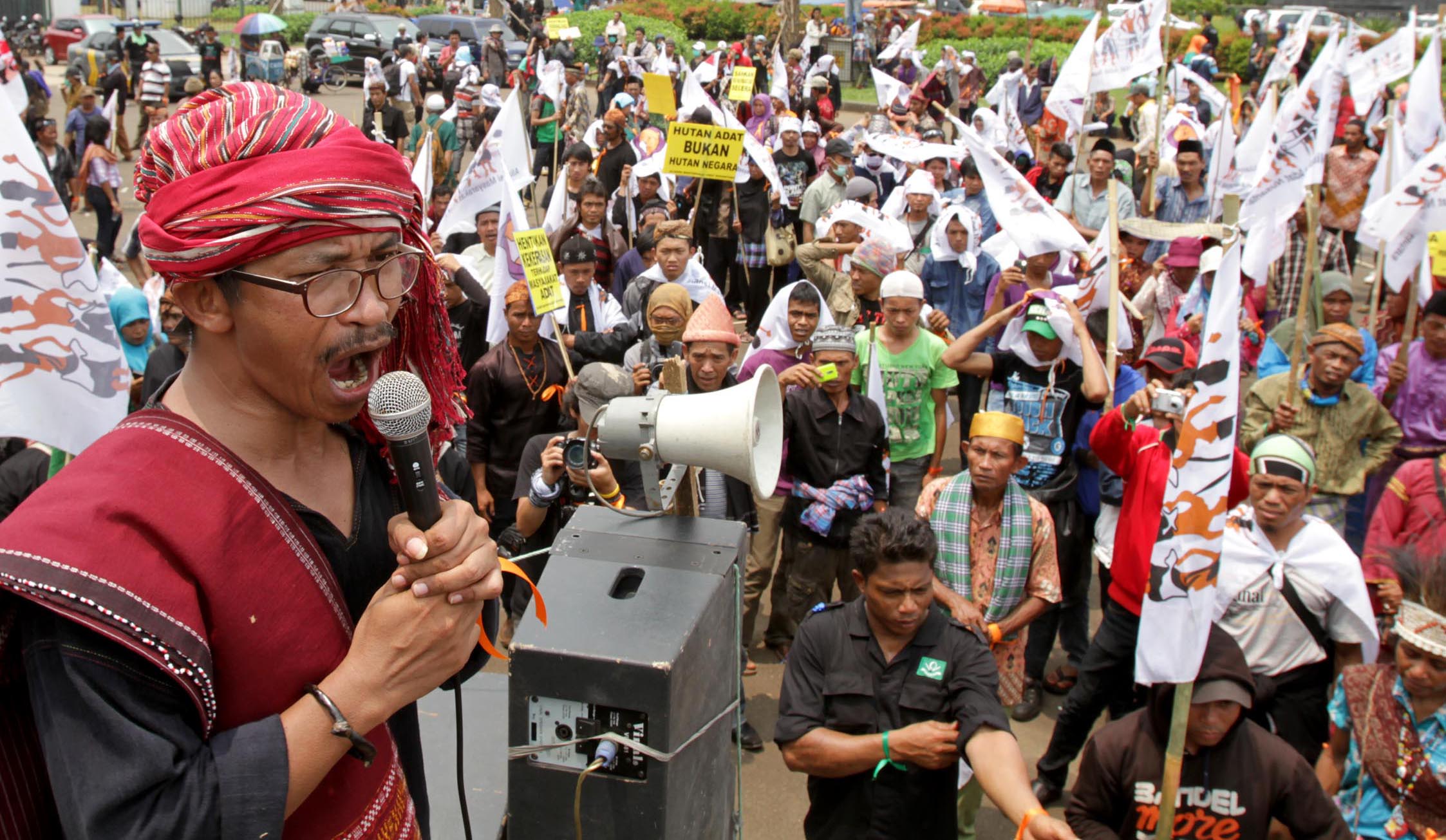 Abdon Nababan, AMAN Secretary General leading protesters to request the President to close down the Ministry of Forestry. The Presidential Palace, Jakarta. (Photo by Sigit D Pratama)
Support our journalism. Become a Patron!

More than one thousand Indigenous Peoples and allies gathered in the city center of Jakarta, while thousands of others gathered in provinces, districts and communities across Indonesia, to urge the [Indonesian] government to implement a landmark Constitutional Court Ruling (Ruling No 35/2012) delivered last May and the National Parliament to adopt an Indigenous Peoples Law.

Ruling No 35/2012 found in favor of three joint petitioners, Aliansi Masyarakat Adat Nusantara (the Indigenous Peoples Alliance of the Archipelago (AMAN)), and two indigenous community representatives, deleting the word “state” in the phrase, “state customary forest.” This potentially paves the way to secure land tenure for indigenous communities, with implications for up to 12 per cent of national territory, and up to 70 million indigenous peoples across Indonesia.

The verdict hits at the core of Indonesia’s natural resource management institutions, particularly the Ministry of Forestry. Following the fall of the authoritarian Suharto regime in 1998, Indonesia has struggled to move towards more equitable economic growth and push forward democratic reforms.

In a country where forests are defined administratively, rather than ecologically, the Ministry of Forestry—a holdover from the Suharto era—remains directly responsible for 75 per cent of national territory overall. This increases to 90 per cent in eastern Indonesia, which continues to lag significantly behind in development indicators. The Ministry generates significant revenue from providing concessions for large-scale plantations and logging, in a country whose forests are among the most valuable in the world.

Properly implemented, Ruling 35/2012 has the potential to correct the legacy of massive deforestation, land loss and eviction of indigenous peoples from their lands. Clear, accessible processes for indigenous land ownership can potentially be the first step towards reducing agrarian conflict between communities and corporations. Delegating authority outside of the Ministry of Forestry for implementation may prove an opportunity for Indonesia’s newer, more reform minded institutions.

In fact Indonesian history shows that the adoption of the Basic Forestry Law in 1967 followed by the establishment of the Ministry of Forestry has resulted in severe deforestation, land loss, conflicts, eviction and even killing of many indigenous leaders across Indonesia.

Indigenous Peoples are hopeful for the existence of A Draft Indigenous Peoples Law currently being finalized by the Parliament. The Law if adopted will be a major step toward recognition and protection of Constitutional Rights of Indigenous Peoples in Indonesia. A Law that will open the window of opportunity for a reconciliation of Indigenous Peoples and The Indonesian State, a process that will end decades of discrimination, uncertainty and conflicts that in the end will ensure the benefit to all Indonesian – a step towards a better Indonesia. Unfortunately, the Ministry of Forestry, that has been assigned by the President in April 2013 to coordinate all four ministries working with the National Parliament to finalized the Draft law for adoption – does not show any promising progress. In fact many argue that the Ministry of Forestry deliberately delays the process.

No longer does Indonesia require institutions that do not serve this aim, that rely on patronage rather than justice, equality, representativeness, and service. Indonesia’s wealth—whether in people, land, forests, or oceans—is not to be squandered and exploited, but to be protected and nurtured, so that we may all benefit and prosper together.

All Indonesians must know and so does the Government must realize that the Ministry of Forestry is the center of all land and resources-related problems in Indonesia, needless to say massive corruption cases currently investigated by the Indonesian Anti Corruption Commission. It is very clear that the Ministry is useless and Indonesia does not need such an institution. All understand that any institution that serves only the few rich at the expense of indigenous peoples has to be shut down. The government has to make Ministry of Forestry history. This is the major homework for the new Government to be born soon after the Presidential Election on 9 July this year.