Hundreds of Indigenous Maya Chorti, Lenca, Pech, Miskito, Tolupan and Garifuna in Honduras marched from south Tegucigalpa to the National Congress to protest a new law that would reduce their right to informed consultation to a mere formality.

The government says the new law aims to comply with the International Labor Organization’s Convention 169 (C169) on Indigenous rights, which forces Nation-States to consult Indigenous people before authorizing any project in their territories, informing them of both risks and benefits.

Indigenous organizations, however, claim the law is an attempt to transform legitimate consultations into mere formalities, stripping the people of their power over their own territories.

The bill was developed in cooperation with jurist Ivan Lanegra, who helped draft a similar law in Peru. Its second article grants the Honduran government the right to ignore the outcome of any consultation and continue with the project, in violation of C169: one of the biggest areas of contention.

The general coordinator of the Black Fraternal Organization of Honduras (Ofraneh), the Indigenous Garifuna Miriam Miranda, explained the ‘Freely Informed Previous Consultation Law’ aims to crystallize the “expropiation and surrender of the territories and nature’s common resources to big business people.” 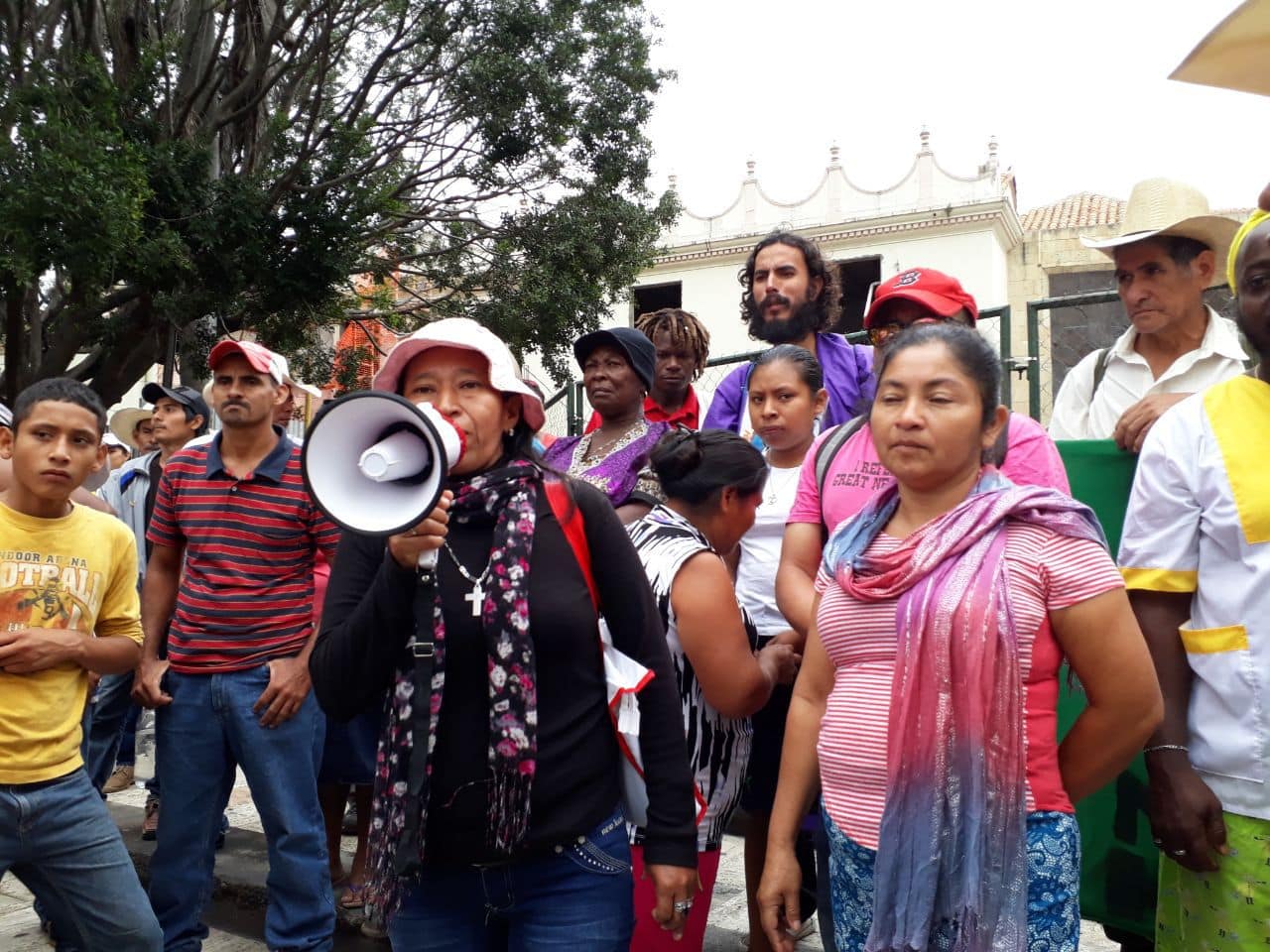 “Indigenous peoples of Honduras protest in front of the Congress against the proposed Free and Informed Previous Consultation Law, promoted by the government, rejecting it because it wasn’t discussed with the Indigenous peoples and grant the government the final word about extractive projects.” — Giorgio Trucchi (@nicaraguaymas)

“Just now there are communities in resistance, people that are being criminalized,” for defending their territories from extractive industry, said Miranda.

A representative of one of the organizations at the march read a collective statement, pledging Indigenous people will continue defending their self-determination and sovereignty, because they have occupied their territories since the Republic of Honduras was founded.

“Wherever your death projects go they will find our resistance inspired by our sisters, like Berta Caceres, who walk with us in the struggles,” continued the statement.

Caceres, an Indigenous Lenca environmental activist, was murdered on March 2016 due to her resistance to a hydroelectrical plant.

The Assembly of Indigenous Peoples of Honduras

The day before the march, Indigenous groups united for the ‘Assembly of Indigenous Peoples of Honduras’ and concluded the bill violates Indigenous rights, aiming to eliminate Indigenous communities as obstacles to large-scale projects on their territories.

“They want to vanish us, the Indigenous peoples, from Earth because we’re an obstacle,” Miranda told the opening ceremony. “Because the last resources, the last common goods of nature, are in our territories. We’re an obstacle to them, and that law they want to pass is only to get rid of us.”

The law was developed only in Spanish, excluding the Indigenous languages of Honduras. According to a representative of the Miskito people, Marlen Jackson, this represents another form of discrimination against them.

The Honduran government organized a technical workshop for the development of the new law in 2015, but only government institutions took part, with most Indigenous organizations excluded.

Rosario Garcia Rodas, coordinator of the Lenca People discussion board, said they left the dialogue because their voices were being ignored.

“The Consultation Law was presented to the Honduras’ Congress by the Honduran Private Enterprise Council. With it, Indigenous territories would be submitted without a binding consultation with the communities.” — Gilda Silvestrucci (@GildateleSUR)

Chorti community leader Danilo Espino denied the government’s claim that it selectes Indigenous representatives, because communities in fact choose their own representatives.

The new law “doesn’t respect the Convention 169… that law is a lie and a falsehood,” said Consuelo Soto, of the Tolupan people. “We, the Indigenous peoples, also have ancestral landrights that have been violated, and they give the lands to the big landlords.”

At the end of the assembly, the peoples issued a collective statement rejecting the “racist law” because it obeys the logic of a dictatorship that aims to destroy Indigenous peoples, their knowledge, languages and dignity.

“The Indigenous peoples are not willing to dialogue and negotiate over our territories. For us, the land is not a means of life; for us, territories mean community and collective life,” reads the statement.

The UN, through its Special Rapporteur on the Rights of Indigenous Peoples Victoria Tauli-Corpuz, has called for the government to modify the law in order to guarantee Indigenous peoples their right to a free and informed consultation, in adherence with international law, but the recommendations have so far been ignored.

This article was originally published at teleSUR. It has been re-published at IC with permission.