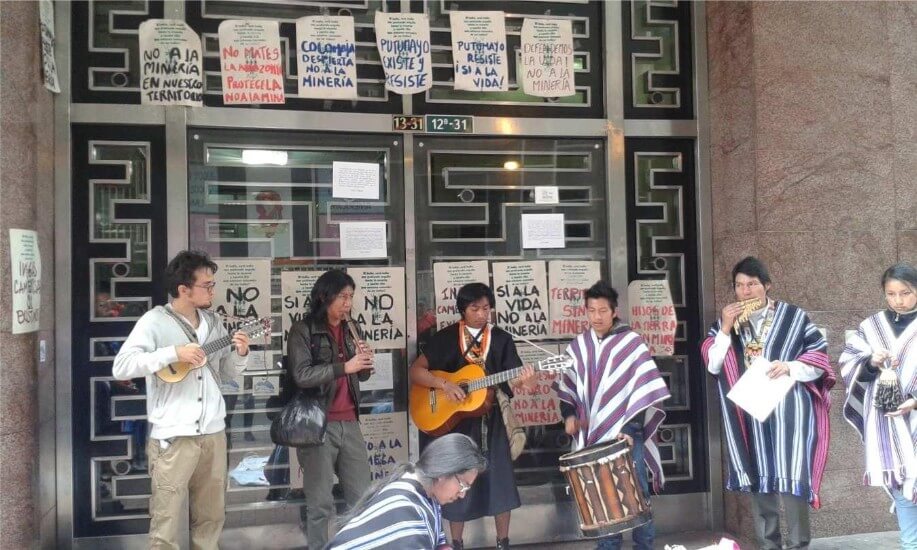 Indigenous Peoples of Putumayo say No to mining in their territories

Ministry of the Interior. Bogota D.C., 13 of March 2015
Support our journalism. Become a Patron!

Twelve indigenous peoples inhabit the Putumayo region in Colombia. In the last few years, they have tried to be heard through constant demonstrations to say ‘no’ to mining and megaprojects in ancestral territories! They demonstrated once again last Friday the 13 of March in Bogotá through colorful actions, which back in the Sibundoy Valley of the Upper Putumayo they call “cultural marches and sit-ins”. The cultural protest in Bogotá took place at the entrance of the Ministry of the Interior.

For Indigenous Peoples their territories are their source of life. Their mission is to protect Mother Nature in order to preserve the Colombian Amazon. It is precisely the indigenous territories of Upper Putumayo that are under a great threat from mining companies. It is this same region that is the birthplace of major rivers which then feed the huge Amazon basin. 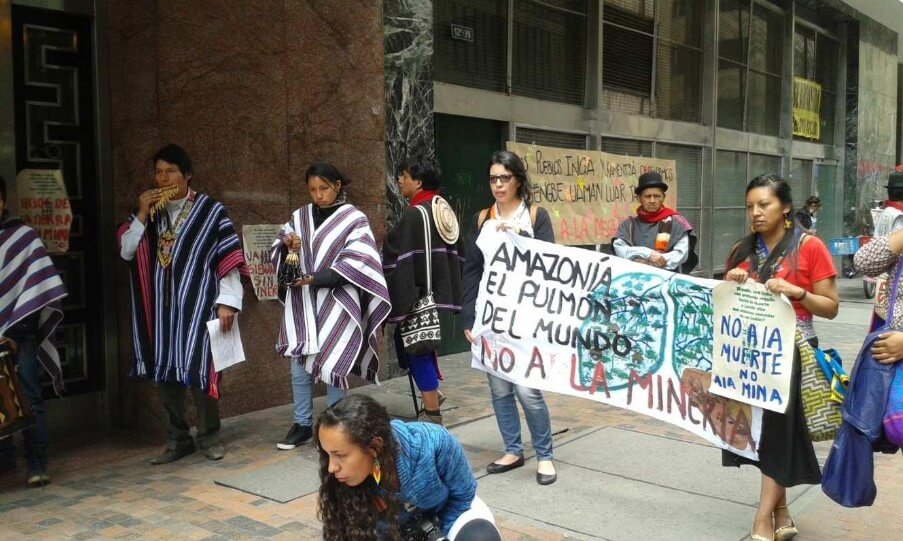 The indigenous peoples of the Putumayo region have organized themselves and taken legal actions and organized social protests in efforts to protect their land and watersheds. Under customary law, their indigenous traditional authorities and communities have rejected the Anglo American Company plans and also its proposals for community consultation. However, government institutions and companies are determined to ignore them. The government and companies do not respect the decisions made by indigenous peoples, and deprive them of their right to act as authorities in their own territories.

The right to free, prior and informed consent is a fundamental one. This rights is undermined by constant ‘certifications’ issued by the Ministry of the Interior for different projects, certifying the NON EXISTENCE OF AFFECTED INDIGENOUS COMMUNITIES. This has been the case in many projects, like the “San Francisco – Mocoa” road-building project facilitated under the controversial South American Initiative for the Integration of Regional Infrastructure (IIRSA). The road route cuts through sacred community sites, while the construction of road drainage systems threatens to flood the indigenous reserves (known as resguardos) with runoff water.

Waters are also threatened by mining projects like Anglo American and a host of other company development projects that risk destroying indigenous territories and cultures. Surprisingly, an official certificate (Number 106) of the Ministry of the Interior example dated February 10, 2015, determines that “mining exploitation polygons DO NOT OVERLAP with ethnic communities”.

Yet the Anglo American mining title is not the only mining concession recorded in the Putumayo. In fact, in the last few years nearly forty mining titles has been sought and granted, as licenses, authorizations and/or exploitation contracts. The majority of them are situated at the mouths of rivers that flow through the Upper Mocoa River Basin Protected Forest Reserve of the). Other are located in municipalities directly or indirectly impacted by the project San Francisco-Mocoa road project. In the case of the Upper Putumayo, there are 26 applications and titles. More than half (57%) are for copper exploitation by the Anglo American company, and 26% for the exploitation of building materials by the Latinoamericana de Construcciones S.A. – Latinco S.A.