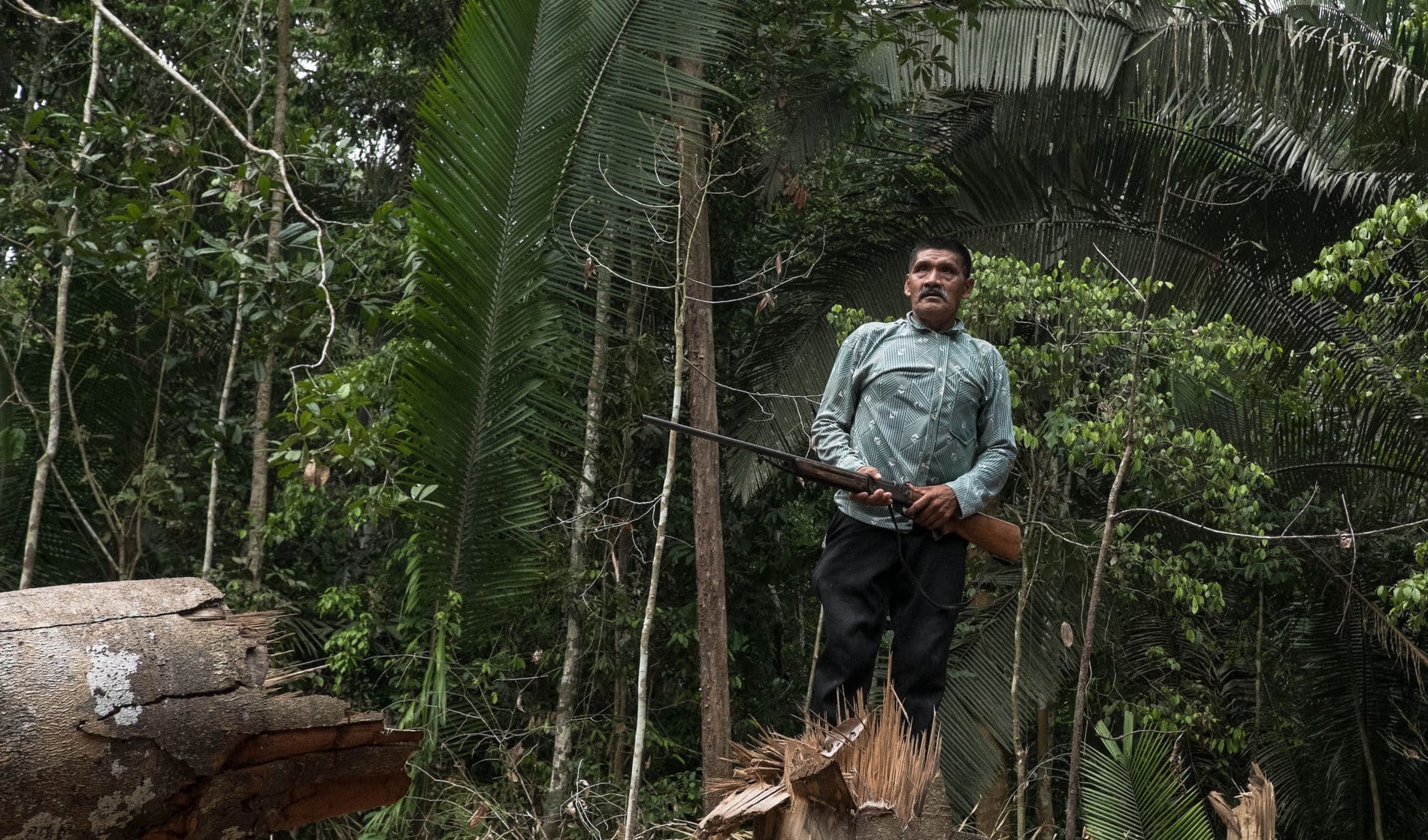 The Karipuna have been denouncing illegal occupation of their land since 2017, but their numbers are so low they find it difficult to resist invaders. Image courtesy of Greenpeace.
Support our journalism. Become a Patron!

In early February, one of Brazil’s main indigenous leaders, Rosivaldo Ferreira da Silva, known as Cacique (chief) Babau, held an emergency meeting with government officials and human rights organizations to denounce a plot to kill him and his family.

He called on authorities for urgent action to investigate the plot and provide protection. He then flew to Brasilia where he was received by the head of the Brazilian Federal Prosecution Office (Procuradoria-Geral da República, PGR), the independent federal litigators.

Babau is one of the leaders of the 4,600 member Tupinambá indigenous group who live on the 47,000-hectare (116,000-acre) Tupinambá Indigenous Reserve in southern Bahia state, within the Caatinga and Atlantic Forest biomes, which has seen soaring deforestation due to agribusiness expansion. Ten years go FUNAI, the government’s indigenous agency, declared the area a reserve but the land has yet to be fully demarcated because of long delays by the Justice Ministry in publishing the final approval document.

The reserve’s creation has been a source of ongoing conflict, with local landowners challenging the indigenous group’s right to occupy the territory – especially now that the land has greatly increased in value as large-scale agricultural producers seek more places to grow export crops.

Babau said he had “robust evidence” of a recent meeting in the town of Itabuna between big landowners and military and civilian policemen to discuss a plot to kill him. Their plan, he said, was to stop him and his family on a highway, plant drugs and arms in his car, then murder all passengers, including his two young nieces, claiming that Babau had returned fire.

Babau told the Folha de S. Paulo newspaper that the objective of the small group of plotters was “to get their hands on the Tupinambá territory.”  He was troubled above all about the plan to besmirch the Indians’ public image: “We are Tupinambá, and we aren’t afraid of death,” he said. “What revolts us is the plan to blacken our name. We live peacefully all our life and then, when we die, they claim we are drug traffickers! That is to kill someone twice!”

So far, the Bahia government’s Justice Secretariat, to which Babau directed his complaint, has refused to comment on the case. The PGR issued a press statement saying that it would “accompany the work of the authorities to guarantee the safety of Babau and his family.”

A group of 25 anthropologists and researchers who have worked with the Tapinambé issued a statement on 13 February in which they called on authorities “to carry out an urgent investigation into the threats and assassination plans made against the Tupinambá people,” “to take immediate and effective measures to protect the Tupinambá, particularly Cacique Babau,” and for the government to complete the demarcation process, hopefully ending the years of conflict.

However, demarcation may not be likely: President Bolsonaro has long made it known that he vehemently opposes further demarcation of indigenous lands. And the government has specifically mentioned this reserve as one of the ones it wishes to reexamine to see if the indigenous claim is valid.

A wave of indigenous conflicts

The threat against the Tupinambá and its leader is no isolated case. Since the beginning of the year, anti-indigenous actions have been reported across Brazil. In a recent article Repórter Brasil, an online non-profit news service and Mongabay media partner, reported that at least 14 indigenous reserves have been invaded or threatened with invasion.

Since the start of 2019, land grabbers have been particularly brazen in their actions against two Amazon indigenous groups in Rondônia state, the Uru-Eu-Wau-Wau, which experienced a major invasion by illegal loggers on 12 January, and the Karipuna.

On 20 January, two Karipuna men from Panorama village were making their way through the forest for a meeting with medics from the Special Secretariat of Indigenous Health (Secretaria Especial de Saúde Indígena, SESAI), when they discovered 20 invaders on indigenous land.

The illegal deforestors ignored the indigenous demand that they move out. “The invaders have built roads and felled a lot of forest!” an indigenous leader told NGO Greenpeace. “They are saying they will invade our village, burn our houses, kill our hens, kill our three main leaders.… Doesn’t FUNAI [Brazil’s indigenous agency] see what they are doing to our people? I don’t understand!”

However, it appears that FUNAI under Bolsonaro may no longer be in a position to respond forcefully. The new government removed it from the powerful Justice Ministry and divided it in two, handing over responsibility for indigenous demarcation to the Ministry of Agriculture, well known for its favoritism toward agribusiness and hostility toward indigenous land rights. The everyday tasks of running FUNAI are now housed with the new Ministry for Women, the Family and Human Rights, a catch-all ministry widely expected to be underfunded and weak. “We don’t know how we will do our work without direct contact with the Federal Police [which remain part of the Justice Ministry],” said one FUNAI employee speaking anonymously.

Despite these changes, the administration is still obliged to implement the law. The Rondônia branch of the Federal Public Ministry (Ministério Público Federal, MPF), a group of independent litigators, has repeatedly called on the Bolsonaro administration to act and remove invaders from the Uru-Eu-Wau-Wau and Karipuna reserves. It has warned that “the situation is getting worse and worse, becoming unsustainable,” with the risk of “bloody conflicts,”

The Karipuna are particularly vulnerable due to successive waves of occupation. The first blow came early in the 20th century when Percival Farquhar, a wealthy entrepreneur from Pennsylvania, U.S., accepted the challenge of building the Madeira-Mamoré railway, linking Brazil and Bolivia for the export of Amazon rubber.

Beating immense logistical problems, Farquhar completed the railway. But the human cost was horrific: it is estimated that 6,000 of 20,000 construction workers died, mainly from malaria and yellow fever. The Karipuna, who had attacked the railway workers, were brutally repressed and forced to work for the rubber barons.

Throughout the 20th century, the Karipuna continued to suffer and die, particularly from introduced diseases, with their population falling to just four in the 1970s. Then those numbers began to rebound. In the early 1980s, a work group marked out an ancestral territory, and in 1998 a Karipuna reserve was officially inaugurated. Today there are 58 known Karipuna. However, more may live, uncontacted, with small bands sighted on occasion fleeing deeper into the forest.

Today, the Karipuna are too few and too weak to organize effective resistance against determined land grabbers. They also believe the current wave of attacks may be especially malicious and motivated by the anger felt by outsiders when Karipuna leader Adriano Karipuna travelled to New York in April 2018 to publicly denounce the threats faced by his people at the U.N. Permanent Forum on Indigenous Issues.

The Karipuna, like the Uru-Eu-Wau-Wau, have made urgent requests to federal and state authorities for law enforcement protection. They say that, so far, the government hasn’t acted with any significant measures. The MPF fears that the current land grabber offensive may complete the process underway for over a century – the final annihilation of the Karipuna. It is warning of “imminent genocide.”

Other violent assaults on indigenous rights are being reported across Brazil. The Pankararu, an indigenous group in the Northeast Brazilian state of Pernambuco has long suffered conflict. But on 28 October, the same day as Bolsonaro’s electoral win, violence against them was ratcheted up when a group of outsiders set fire to the Pankararu’s health clinic.

Outsiders are also threatening the Tembés and Timbiras indigenous groups in the Alto Rio Guamá Indigenous Reserve in the Amazonian state of Pará. One of their leaders, who wishes to remain anonymous, said that the Indians have received threatening letters saying that “the time of Lula [the former leftist Workers’ Party president] is over and [rightist] Bolsonaro’s hour has come.” Another five indigenous territories near the city of Altamira in Pará state have also reportedly been invaded.

Some indigenous groups are fighting back against what some leaders are calling a “free for all.” The Guajajara, a large indigenous group in the Northeast state of Maranhão, have set up “Guardians of the Forest” patrols, now involving as many as 120 Indians. They confront and evict loggers. “I don’t know how many times we’ve kicked loggers off our land,” said Tainaky, one of the Guardians.

However, many indigenous people fear that, without decisive action by authorities, the rule of law will deteriorate. “The invasions will intensify,” predicted Adriano Karipuna. “Bolsonaro proclaims that Indians don’t need land and are lazy, that they are like animals in a zoo. And now the man who said these wicked things is in power.”

Esequiel Roque do Espírito Santo, Undersecretary for Policies of Promotion of Racial Equity in the new Ministry of Family, Women and Human Rights, denies any holding back of law enforcement by the Bolsonaro administration. On a February visit to the Uru-eu-wau-wau Indigenous Reserve to assess the January invasion, he said, “We want to send a message that the State is close, that we were there to stop the illegality.” However, the Uru-eu-wau-wau Reserve has yet to see a major assist from law enforcement.

The anthropologist, Daniela Alarcon, one of the signatories of the Tupinambé letter of support, worries that past Bolsonaro incendiary statements could incite violence. She told Mongabay: “The repeated anti-indigenous statements that Bolsonaro has made operate like a greenlight to those working against the Indians to take the law in their own hands. They believe they will be supported and legitimized by the government if they do so.”

Cleber Buzatto, executive secretary of the Catholic Church’s Indigenous Missionary Council (Conselho Indígenista Missionário, CIMI), believes there has been a dangerous shift in policy under the new president: “We are witnessing a new phase in the illegal and criminal takeover of indigenous land by economic groups. The land grabbers are encouraged and protected by the indigenous policies of the Bolsonaro government. The rhetoric against the constitutional rights of the Indians heard during the campaign is now reflected in administrative acts.”

Indeed, the president did make extravagant promises to industrial agribusiness and to the ruralistas, the nation’s rural elite, during his electoral campaign; and they responded in kind by becoming his close political ally. If recent events are any indicator, and if rural violence and exploitation escalate, Brazil’s indigenous groups and the Amazon rainforest, could potentially pay a high price to satisfy Bolsonaro’s political base.

This article was originally published at Mongaybay. It has been re-published at IC under a Creative Commons License