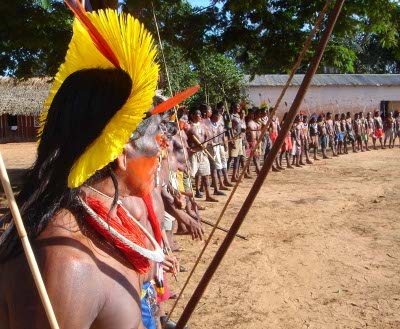 Indigenous Peoples in Brazil will hold a mass 5-day rally next week, dubbed “the Xingu Encounter,” to protest against a series of hydro dams planned for the Xingu river and its tributaries.

The sacred lands website explains, there are a total of 70 large dams and dozens of smaller ones planned throughout the central and northern parts of the country. “One of these is the proposed Paranatinga II dam. Located on the Culuene River, a tributary of the Xingu, Paranatinga II would destroy an area sacred to 14 tribal groups. The same tribes also oppose the much larger proposed dam downstream, Belo Monte, which would displace indigenous communities.” If completed, Belo Monte would be the world’s third largest hydro dam.

The encounter, which will take place from May 19 to 23 in the town of Altamira, Pará, is expected to gather over a thousand People from the Kayapó, Ikpeng and other tribes, along with riverbank dwellers and small farmers… to oppose the project,” notes Survival International in a recent press release.

“Also taking part in the five-day meeting will be international organizations, technical experts, and Brazilian public officials,” according to International Rivers. “The gathering could mark a decisive moment for the alliance of indigenous people, environmentalists and social movements who oppose damming the Amazon.”

They go on to say, “the Xingu Encounter is a long overdue follow-up to an historic gathering in Altamira in February 1989 when the Kayapó and other indigenous groups from the Xingu Basin mobilized to reject the Brazilian government’s plans for a series of six hydroelectric dams on the river. That gathering led to the cancellation of a World Bank loan for the dams and plans to dam the Xingu were suspended for more than a decade. In recent years, Brazil’s energy planners have once again focused on damming the rivers of the Amazon, with 70 large dams being planned for the Amazon Basin by the year 2030”.

Here are a few quotes from the Indigenous People threatened by the Xingu River Dams:

“We are indigenous people of the Xingu and we don’t want this dam on the river. We want the fish and the fauna and flora, we want the river to be clean, we want water that feeds us and quenches our thirst. We’re not holding back the country’s progress. We’re defending our rights to life, to our land, and to our way of life.” (From Survival International Press Release, May 13.)

“You are a liar – We do not need electricity. Electricity is not going to give us our food. We need our rivers to flow freely: our future depends on it. We need our jungles for hunting and gathering. We do not need your dam.” (A legendary response by Tuira Kayapó at the Altamira Gathering in 1989.)

“We are totally opposed to Belo Monte [one of the large dams] because the Xingu river is our life. The death of the river threatens our lives, our future, our people, and our children and grandchildren. Any interference with the XIngu will cause the extinction of game animals, of fish and will profoundly affect our lands and our health. We indigenous peoples wish to live and to breath the Xingu river. Its water are the source of life and we don’t want to die. We will not give up on life and we will not abandon our struggle. Our war cries are surging in our throats to oppose the enemy.” (From a collective statement In defence of life and the Xingu River, dated June 3, 2007)