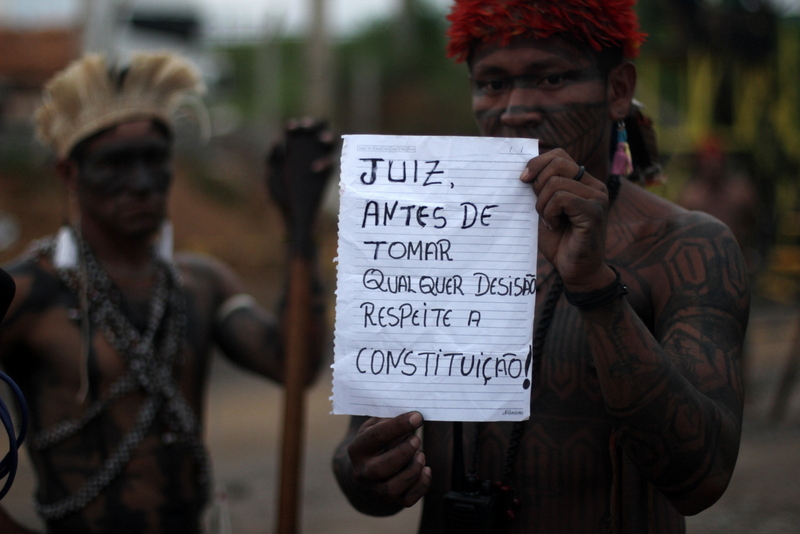 Xingu Alive Forever Movement (MXVPS), May 27, 2013 – About 170 indigenous people returned to occupy the main construction site of the Belo Monte hydroelectric plant in the municipality of Vitória do Xingu, in southwestern Pará State in the early morning this Monday (the 27th). Their central demand is that the construction of the Monte Dam and the environmental feasibility studies for the construction of hydroelectric dams in the Rio Tapajós be suspended until prior consultations with indigenous peoples are carried out. At this time the indigenous protestors are finalizing a letter that will state explicitly and in more detail their reasoning and the demands of the occupiers, who are made up of representatives of Xipaia and Arara ethnicities from the Big Bend of the Xingu River in addition to representatives of Kayapo, Mundurukú, and Tupinambás ethnicities.

Indigenous occupiers claim that these energy-producing mega projects cause serious environmental and social impacts and destroy the way of life of the region’s peoples and traditional communities. For example, the construction of Belo Monte will cause 100 km (60 miles) of the Xingu to dry out on the river’s Big Bend if completed. In the case of the construction of hydroelectric dams planned by the government for the Tapajós River, the ancient riverside villages of the Mundurukú people would be completely flooded.

This is the second occupation of Belo Monte’s construction site in less than a month. On May 2nd the indigenous protestors occupied the same work camp and stayed there for eight days. They claim that they left the last occupation peacefully because the federal government ensured that there would be a negotiation, which did not happen. In this case the protestors guarantee that they will maintain their occupation until representatives of the federal government talk with them and meet their demands.

Indigenous people also criticize the presence of the military’s National Force in the region in order to ensure safety of teams carrying out environmental impact studies for dams on the Tapajós River.

In addition to the police officers who were already housed within the construction site with the aim of ensuring the protection of Belo Monte, other contingents of police are arriving to the site of the occupation that began yesterday morning.

See the latest letter from the occupation below:

Letter No. 7: Federal Government, we have returned

We are the Munduruku, Xipaya, Kayapó, Arara and Tupinambá indigenous peoples. We live on the river and in the forest and we are opposed to the destruction of both. You already know us, but now we are in greater numbers.

You (the Government) said that if we left the construction sites of Belo Monte, we would be heard. We left peacefully – and saved you the shame of throwing us out by force. However we were not heard. The Government did not receive us. We called Minister Gilberto Carvalho and he did not come.

Waiting and calling did not work for us. So we are occupying your construction sites once again. We didn’t want to be back in your desert of holes and concrete. We take no pleasure in leaving our homes and our lands to hang our hamocks in your buildings. But how can we not do this, when that would mean losing our lands?

We want the suspension of studies and the construction of the dams that flood our territories; that cut the forest in the middle; that kill the fish and scare off the animals, that open up the river and the land to the miners who devour everything in their path. These bring more companies, more loggers, more conflicts, more prostitution, more drugs, more diseases, more violence.

We demand to be consulted prior to these constructions, because it is our right guaranteed by the Constitution and international treaties. This right was never carried out here in Belo Monte; nor in the Teles Pires River and it’s not being complied in the Tapajós river either. It’s impossible for all of you to continue repeating that indigenous people were consulted. Everyone knows that this is not true.

From now on, you the Government have to stop telling lies through press releases and media interviews. You need to stop treating us like naive, irresponsible, and easily-manipulated children. We are indigenous people and you need to deal with it. You also need to stop lying to the press that we are fighting with the workers: they are sympathetic to our cause! We wrote a letter to them yesterday! Here at construction sites we played soccer together every day during the last occupation. When we left, a worker to whom we gave many necklaces and bracelets told us: “I’ll miss you”.

We are occupying your construction sites once again – and how many times will we need to do this until you respect you own laws? How many restraining orders, fines, possession orders will you issue before finally hearing us? How many rubber bullets, bombs and pepper sprays do you plan to use until you realize that you are wrong? Or do you plan to kill again? How many indigenous will you kill in addition to our brother Adenilson Munduruku, from the community of Teles Pires, simply because we do not want dams?

And do not send the National Force to negotiate for you. Come yourselves. We want Dilma to come and talk directly to us.

Originally published in Portuguese at www.XinguVivo.org.br; translation by Amazon Watch