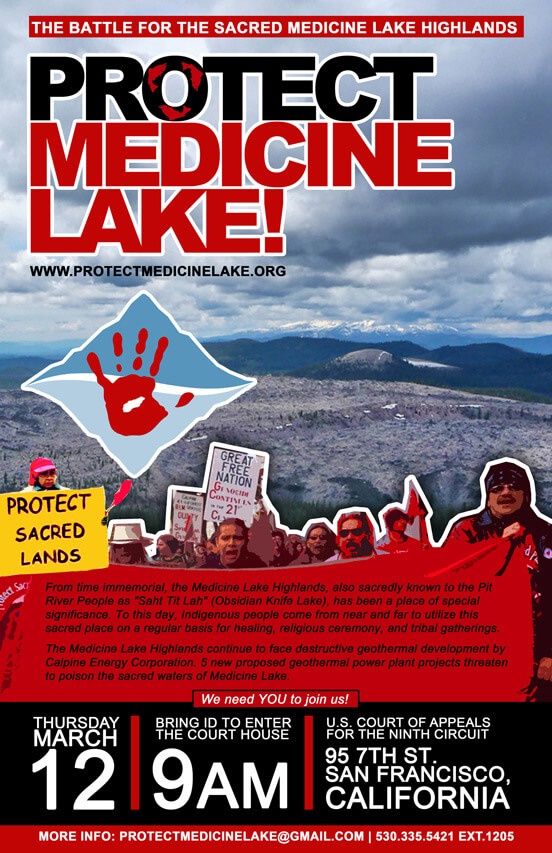 From time immemorial, Indigenous people have made pilgrimages to the Highlands for healing, religious ceremony, and tribal gatherings. However, for more than 25 years, Calpine Energy Corporation, Bureau of Land Management (BLM) and United States Forest Service have attempted to desecrate and destroy this precious place of deep religious significance, with five proposed geothermal power projects. At issue are 26 geothermal leases, originally executed by BLM in the 1980s with only cursory environmental review and no tribal consultation.

On July 30, 2013 a lower court decided against environmentalists and Indigenous peoples in their legal challenge of geothermal lease renewals affecting the sacred Medicine Lake Highlands. The Stanford Environmental Law Clinic, which represents Native Tribes and environmental groups in the case, has appealed this adverse decision to the Ninth Circuit Court. The previous Ninth Circuit Court decision resulted in revoking the lease renewals for the first of two 49-megawatt projects.

If approved, industrial-scale geothermal development would desecrate the Medicine Lake Highlands, threaten underlying aquifer and result in the injection of toxins into the atmosphere and waters. It would have a devastating impact on deeply-held religious views and practices, traditional cultural values, pristine environmental resources, and rare opportunities for recreation.

The President’s Advisory Council on Historic Preservation (“ACHP”) has explained, “multiple lines of evidence substantiate the historic and continuing value of the Medicine Lake area and the volcanic caldera it rests in to [the Pit River Tribe and other] Native Americans in maintaining their traditional cultural integrity”.

7AM: Sunrise Prayer Vigil Ceremonial gathering at Yerba Buena Gardens 4th and Howard near the courthouse, SF. Welcoming by Ohlone representatives in Yalamu territory. All are welcome to attend.

9:30 AM: Rally & Prayers outside the Courthouse.

12:30 -12:45 PM: Press Conference on the steps of the 9th Circuit courthouse immediately after the hearing.

The Medicine Lake Highlands, also sacredly known to the Pit River People, the lead plaintiffs, as “Saht Tit Lah” (Obsidian Knife Lake) has been a place of special significance. To this day, Indigenous people come from near and far to utilize this sacred place on a regular basis for healing, religious ceremony, and tribal gatherings.