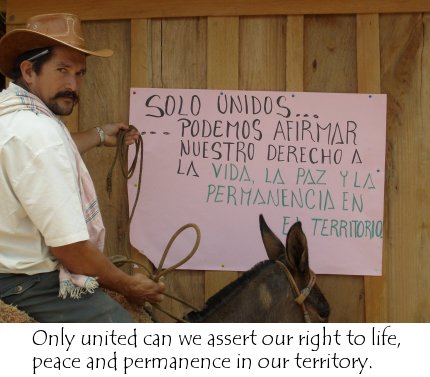 Last week, nearly 500 indigenous people claimed their right to land and demanded the Colombian State fulfill a set of promises made to the Indigenous Nasa community of Northern Cauca, for the States its role in the massacre of El Nilo.

In 1991, a paramilitary group (some of whom were members of the National Police) entered the Nasa community and brutally massacred 11 men, 5 women and 4 children.

Seven years later, in 1998, Colombian President Ernesto Samper apologized to the Nasa and promised reparations for the families of the victims and for the entire Community.

For ten years now, the Nasa have been waiting for those reparations.

Well, on May 21 the Nasa decided they weren’t going to wait anymore. Unfortunately, for indigenous People in Cauca no just deed goes unpunished… The Government quickly reacted to the reclamation by sending in the ESMAD, “the Colombian version of a ‘SWAT’ team.” At least 8 Nasa were seriously injured.

According to El Pais, the government is presently seeking a court order to forcefully remove the remaining People from the land.

Courtesy of en-camino.org, here is a communique from the Regional Indigenous Council of Cauca (translated into English by Elena Renderos) sent out shortly after the recent attack.

The Lies, Armed Repression, and Betrayals of the Colombian Government in Cauca

Today, 21 May 2008, in the hacienda La Emperatriz, nearly 500 people claimed their right to land and demanded the fulfillment of agreements that the Colombian state made with indigenous communities in Northern Cauca. Agreements associated with the massacre in El Nilo. The community was attacked by the ESMAD [the Colombian version of a ‘SWAT’ team] of the national police with bombs and firearms, seriously injuring 8 indigenous Nasa. Victims of the attack included Eulogio Dagua Cuetia, Luís Enrique Ramos, Alex Méndez and Luís Eduardo Ramos, community members from the reserves of Jambaló, San Francisco, Huellas, and Toribío.

As our readers might recall, on July 29, 1998, President Ernesto Samper, acknowledged the responsibility of the Colombian State in the massacre of El Nilo, which occurred in December 1991 (20 indigenous Nasa men, women and children were murdered). On behalf of the Colombian state, he apologized to the families of the victims and to the Nasa community of Northern Cauca, making promises to the relatives of the victims and our communities, to implement the recommendations of the Inter-American Human Rights Commission in the matter of Justice and Individual and Collective Reparations.

Ten years after this incident, the breaches continued, even though on September 13, 2005, the current government promised to fulfill any pending obligations through another agreement, within the next two years. Nevertheless, as is customary with this government, the agreement has been stalled through administrative maneuvers, bureaucratic processes, and media disinformation.

In the latest episode of events, the national government has launched strategies to generate conflict among indigenous communities, Afro-Colombians, and peasants as a means to evade its obligations. Even worse, it has promulgated the Rural Statute and taken other administrative measures that, in fact, invalidate the agreements and commitments it had made, all these measures implemented in unabashed support of multinational capital.

The Presidency of the Republic maintains a defamatory campaign filled with propaganda against indigenous communities aimed at denying our rights to reparations and to our territories. This is evidenced by the March 15, 2008, Community Council in Popayán – in a conversation among President Uribe, the president of the SAG [the Society of Agriculturalists and Livestock Farmers of Cauca], the regional public prosecutor, an army general and the Ministers of the Interior and Agriculture –, where the government offered rewards to informants who denounced anyone involved in the Liberation of Mother Earth.

In spite of the 1991 Constitution, which recognized the existence of indigenous communities and ordered the protection of ethnic diversity in Colombia, the massacre of El Nilo represents the continuation of official policies presented in a discriminatory and hostile manner against the people of Cauca. This situation continues in concert with the arrival of the current President to power: the Naya massacre occurred in April 2001, an event which made more than 100 people victims to paramilitary violence and nearly five thousand displaced, many of whom returned home without finding any form of security put in place by the state. In 2001, there were also the massacres of 13 indigenous in Gualanday, in the municipality of Corinto, and 7 indigenous in San Pedro, in the municipality of Santander de Quilichao.

An agreement signed in September 2005 ratified the process of the Liberation of Mother Earth put forward by the communities of Caloto. Coincidentally, three indigenous people have since been assassinated by the Public Forces, and there have been numerous reports of forced disappearances, selective murders, and of armed confrontations, all of which have had their risks minimized by the temporary displacement to permanent assembly zones organized and defined by the communities themselves within our ancestral territories.

The government’s propaganda strategy advances with threats to landowners who choose to sell their lands to indigenous peoples and objects, also when the land offered in reparation is promoted as destined for peasants, victims of displacement, and Afro-Colombian communities in order to ignite inter-ethnic conflict. The main obstacle has been the promotion of impediments presented by the government as general policies within Municipal Plans of Territorial Organization, under the premise: “not one more centimeter of land for indigenous peoples.” (as the Minister of Agriculture has stated recurrently)

However, the main strategy being spread by the current President is the campaign aimed at stigmatizing indigenous organizations in Cauca, falsely accusing us of terrorism and alliances with guerrilla groups. This is the main pretext to the carrying out of Phase II of Plan Colombia in our territory, which is being implemented through military-civic actions with the objective of facilitating our flight from our land and resources, which would then be handed over to the private interests of the multinationals.

Given the repressive activity of the Public Forces against the Nasa community in Northern Cauca, as the CRIC’s Elder Council, we reiterate our support for the communities that choose to continue to defend our Mother Earth and demand that the Colombian State fulfill its constitutional duty to guarantee the fundamental rights of our communities.

We urgently require humanitarian monitoring from the international community due to the permanent violations of human rights of indigenous communities in Cauca and the breach of commitments from Colombian State towards our communities. Said attention from multilateral organizations is essential given the lack of neutrality from Uribe’s government in the conflict for land in Cauca.

Lastly, we ask other indigenous communities and peasants to join in solidarity with those who claim their sacred right to land through truth, resistance, and justice.