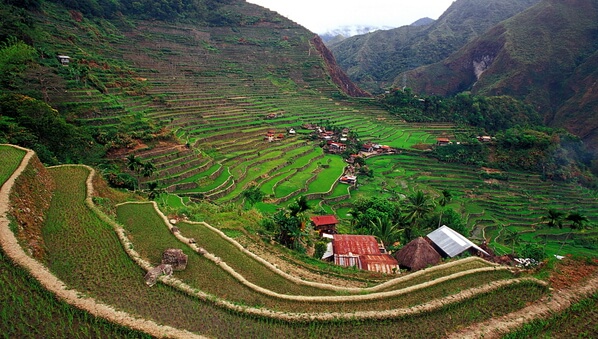 Batad village, near Banaue in the Cordilleras mountain range, backed by it's amphitheatre of rice terraces (Image credit: Chris Stowers/Panos)
Support our journalism. Become a Patron!

KATHMANDU – Farmers from 25 indigenous mountain communities in ten countries have come together to share traditional knowledge that could help them to mitigate climate change and to lobby governments for greater recognition of their unique knowledge.

The International Network of Mountain Indigenous Peoples was formed at a workshop in Bhutan last month (26 May-1 June). It includes communities from Bhutan, China, India, Kyrgyzstan, Papua New Guinea, Peru, the Philippines, Taiwan, Tajikistan and Thailand.

Member communities from Bhutan, China and Peru had already agreed to exchange seeds at a meeting held in Peru earlier this year (26 April-2 May). The agreement was extended to the other members at the most recent meeting.

The farmers say the network will enable communities to access new seed varieties that are more resilient to pests and drought; will help increase their crop diversity; and will reduce their dependence on corporate-owned seeds.

“Learning about experiences and strategies from other farming communities — based on local knowledge systems — through this network reaffirms people’s beliefs and faith in their own systems, values and traditional knowledge,” says Reetu Sogani, an activist who works with the International Institute for Environment and Development’s (IIED’s) Smallholder Innovation for Resilience project, which was involved in the workshop.

The meeting also developed what it calls The Bhutan Declaration on Climate Change and Mountain Indigenous Peoples. The declaration calls on governments to: support climate change adaptation measures based on traditional knowledge; promote indigenous languages; and bridge local knowledge and science to create effective solutions for conservation, food security and climate adaptation.

“Mountain environments are characterized by harsh natural conditions which are being exacerbated by changes in climate,” says Krystyna Swiderska, principal researcher at the IIED, which co-organized the Bhutan workshop.

Swiderska says that a lot of adaptation funding never reaches communities or goes towards developing high-tech solutions, which can replace local crop diversity and knowledge — thereby undermining a community’s adaptive capacity in the longer term.

The 5th Intergovernmental Panel on Climate Change (IPCC) report also recognizes the role and value of local and traditional knowledge in climate change adaptation, noting that such knowledge is often not included in adaptation planning.

The programme will focus initially on the exchange of potatoes between mountain communities in Bhutan, China and Peru, with support from scientists at CIP, using in-vitro material (as opposed to seeds) to breed new varieties of potatoes that are both more resilient to local conditions and more productive, says Swiderska.

She adds that the other factors that are leading to the loss of traditional knowledge include loss of indigenous languages, which are not always taught in schools; young people discontinuing farming; and migration to cities.

Khadka says: “This network is a good initiative to fill the knowledge gap and address similar problems between mountain communities with similar farming systems, altitudes and ecological conditions.”

Link to The Bhutan Declaration on Climate Change and Mountain Indigenous Peoples
Article first published at SciDev.Net. Republished under a Creative Commons License