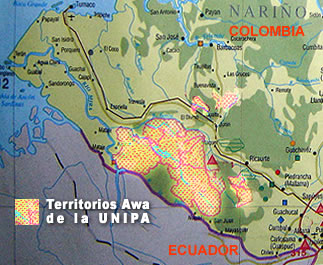 Indigenous authorities in Colombia and Ecuador have issued an “ultimatum” to the Revolutionary Armed Forces of Colombia (FARC), demanding they return the bodies of the indigenous Awa who were brutally massacred this month, so they can be buried according to Awa tradition.

The statement warns that if the bodies are not returned by February 23 at 6:00pm, a “Humanitarian Minga” will be carried out by indigenous communities to enter the conflicted territory and recover the bodies on their own.

it also calls on “All armed actors, legal and illegal, to immediately withdraw from Awá territory”” so an international team can access the region to clear it of landmines.

The statement was issued by the National Indigenous Organization of Colombia (ONIC) on February 19, two days after FARC accepted responsibility for killing eight Awa this month, an act they say was justified because ‘the Awa were collaborating with the Colombian military’.

The claim has been used for decades to justify the slaughter of Indigenous people, and is part of a much broader campaign of subjugation, murder, land theft and displacement.

In 2009 alone, it has resulted in the death 50, the wounding of hundreds and the displacement of thousands.

Awa Leadership, along with the National Indigenous Organization of Colombia, further point out that a total of 27 Awa were killed this month. They say FARC was responsible for all of them.