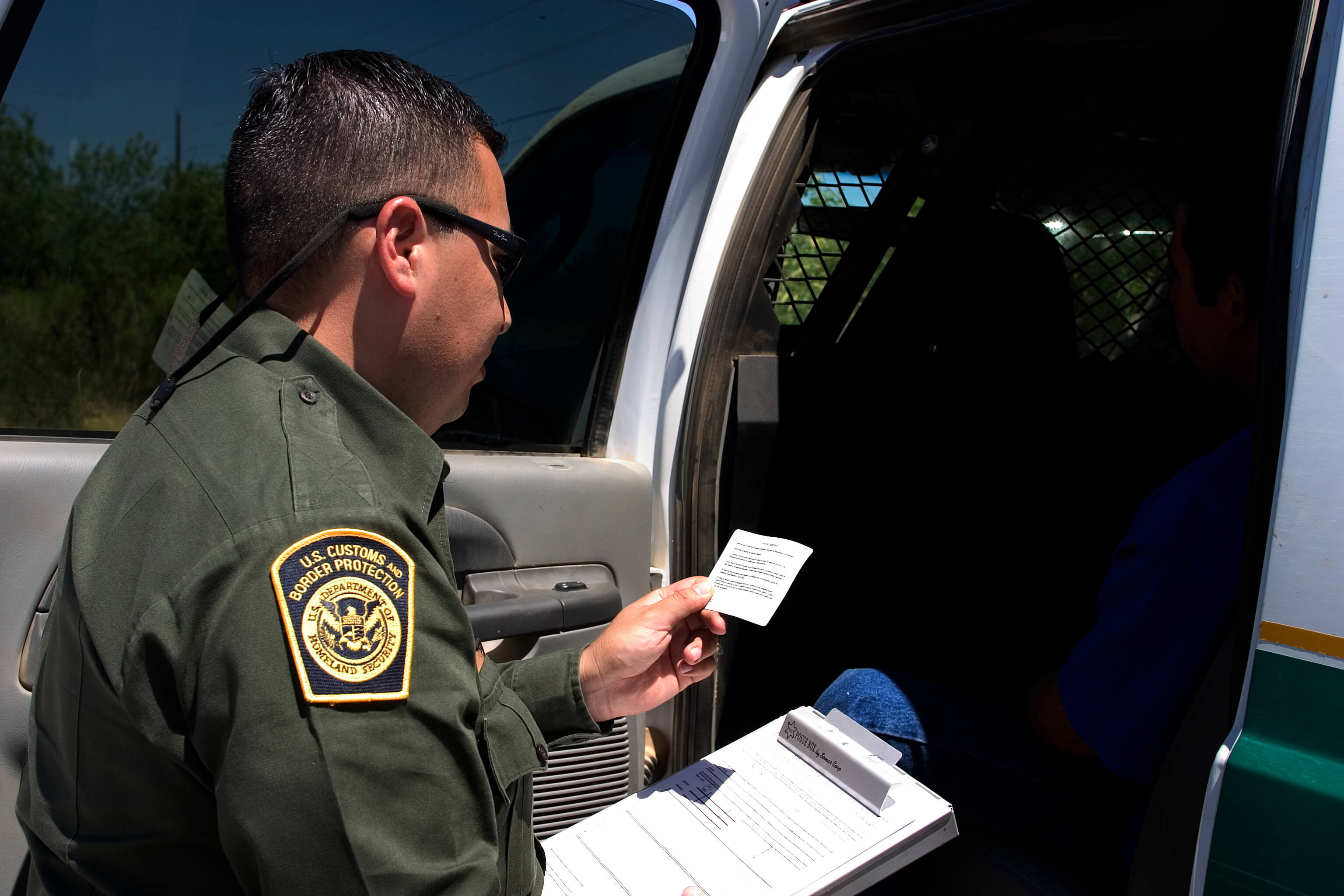 Language barriers mean Indigenous families may be more likely to be split up.
Border Patrol agents reads the Miranda rights.
Support our journalism. Become a Patron!

On Wednesday, President Donald Trump signed an executive order essentially back-peddling on his administration’s “zero tolerance” border-crossing policy, which has been separating families along the U.S.-Mexico border. Still, hundreds of minors remain locked in detention, isolated from their parents — including Indigenous children from Mexico and Central and South America.

Trump’s critics often deride the president as outside American norms, but in this case, the United States has set a number of precedents for separating families, particularly for people of color and their children, with its history of black enslavement and forcible removal of Native children to boarding schools.

Between May 5 and June 9, more than 2,000 immigrant families were stopped at the U.S.-Mexico border. Government agents and agencies have failed to identify Indigenous individuals and families after apprehension and because many Indigenous migrants speak neither English or Spanish, language barriers can lead to human and Indigenous rights violations and increase the risk for family separations.

According to a 2015 report by U.S. Immigration and Customs Enforcement (ICE), K’iche’, Mam, Achi, Ixil, Awakatek, Jakaltek and Qanjobal — Mayan dialects spoken in what is currently Guatemala and southern Mexico — were “represented within the ICE family residential facilities.” In Latin America, at least 560 Indigenous languages are spoken by 780 different tribal and ethnic groups.

For ICE, Indigenous languages pose a challenge for interpreters. However, data on Indigenous language speakers encountered by law-enforcement officials at the border are held by Customs and Border Protection, which did not respond to requests for those statistics.

“There’s certainly been an increase (in Indigenous language speakers),” said John Haviland, an anthropological linguist at University of California, San Diego and Tzotzil interpreter. “No question at all.”

Reasons for the increase in Indigenous migration range from economic needs to displacement due to violence, but almost no hard statistics are available on anything related to Indigenous people crossing the border.

Haviland provides interpretation services for Homeland Security, court proceedings and medical situations. He said that because of language barriers, child separation — at least in the case of Indigenous families who speak no Spanish or English — had been a common practice, at least anecdotally, even before the Trump administration’s policy.

“A massive number of family law cases basically end up with children being taken away,” said Haviland. “They do it more often with Indigenous migrants than with Spanish migrants, and the reason is very simple: Nobody can actually contradict the claim that can be made by social services that an Indigenous mom is an incompetent mom, because basically, they can’t talk to the mom.”

People are logged in the system by nationality, not tribal affiliation. That means Indigenous legal frameworks, international standards and human rights can be ignored by federal agencies.

“The question of Indigeneity in Latin America is very different than it is in the countries that were colonized by Great Britain,” said Rebecca Tsosie, regents’ professor of law and faculty co-chair of the Indigenous People’s Law and Policy Program at the University of Arizona. “We see a community that still speaks their Indigenous language, that still dresses the way they have always dressed. That’s the demarcation that, culturally, they’ve remained distinct.”

In the U.S., she said, Indigeneity is seen more as a political identity.

“So, if you’re not an enrolled member of a federally recognized tribe, eyebrows go up: Are you really Indigenous?” she said. “There are politics around Indigeneity, and it revolves around the United States’ framework. So, the idea is one of exceptionalism.”

“The Declaration on the Rights of Indigenous People would say that is a violation of their human rights,” said Tsosie. “They have a right to exist in their family unit without the government breaking that up.”

Trump’s executive order calling for an end to family separations at the border makes no special provisions for Indigenous people, but does open the door for families to be held in detention indefinitely. Children already separated from their families will not be reunited immediately.

“Congress and the President should take heed of such abhorrent mistakes from the past and actually live the moral values this country proclaims to embody by immediately ending this policy and reuniting the affected children with their parents,” wrote Keel. “Families belong together.”

Tristan Ahtone is a member of the Kiowa Tribe and associate editor of the High Country News tribal affairs desk.