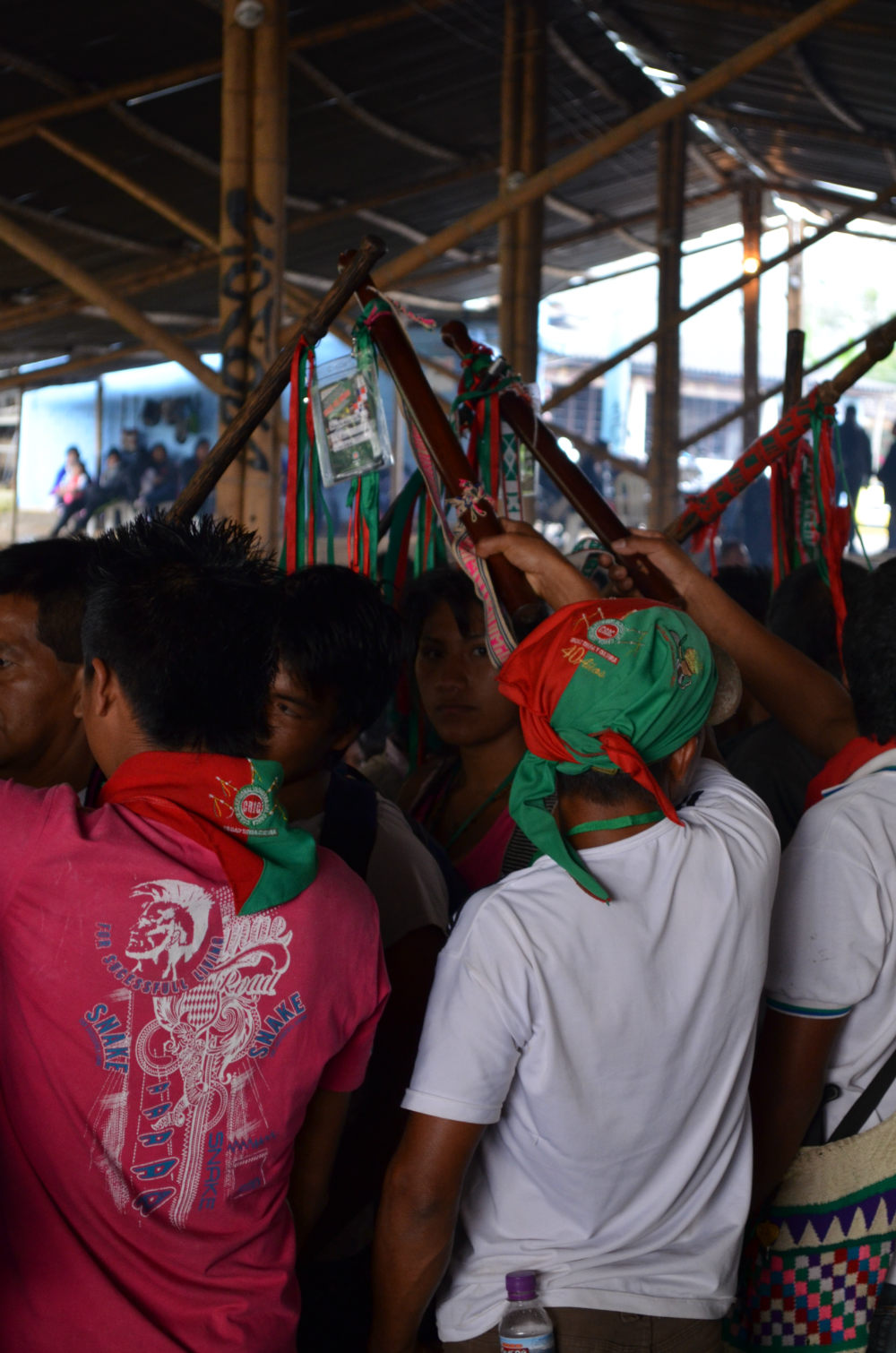 Members of the Indigenous Guard during the 43rd anniversary of the CRIC (Photo: Robin Llewellyn)
Support our journalism. Become a Patron! 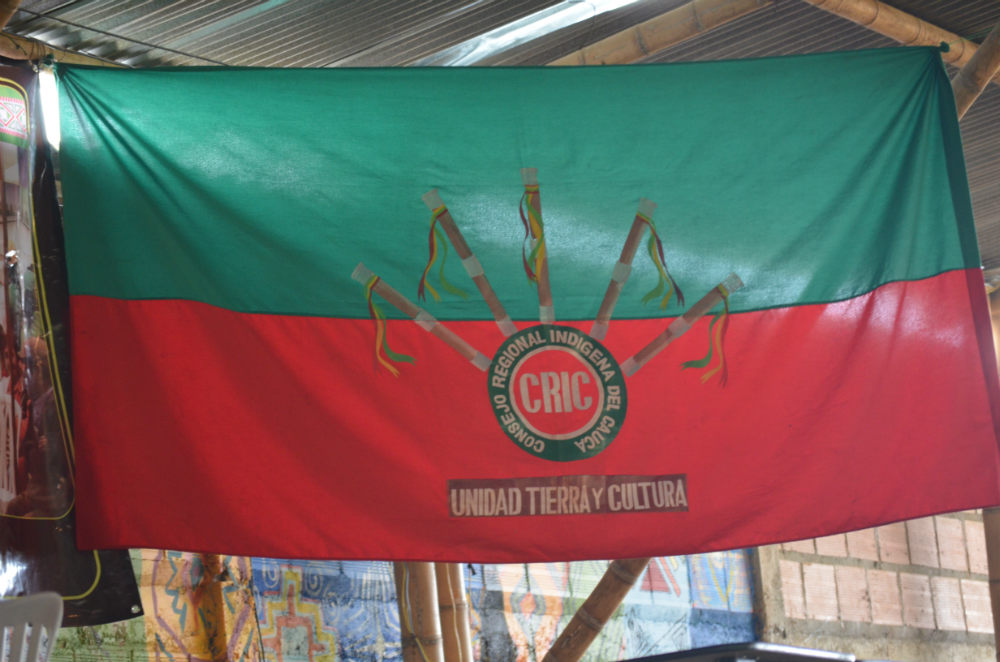 Flag of the Regional Indigenous Council of Cauca, of which ACIN is a part (Photo: Robin Llewellyn)

The Commission had been attending to over 50 families displaced by an upsurge in fighting prior to their being attacked in Jambaló, Cauca, by the Revolutionary Armed Forces of Colombia (FARC). Yoiner Medina Talaga, who was shot in the chest, remains in intensive care. Germán Valencia was shot in the arm while Nelson Pilcué was injured by shattering glass and metal.

The Nasa people of northern Cauca have consistently demanded that all armed groups leave their territory, which continues to be fought over by the FARC, the Army, and paramilitary groups including the Aguilas Negras, Urabeños, and Rastrojos. Nasa communities have developed the Indigenous Guard as an unarmed force that counters illegal activities in their territory, and also confronts all armed actors and asks them to leave.

“The indigenous communities want to control their own territory,” says Feliciano Valencia, German Valencia’s brother and an ACIN activist and Pais Comun presidential candidate. “The community wants the Army to leave and the guerrillas to leave… The war cannot take place in the middle of the civilian population.” 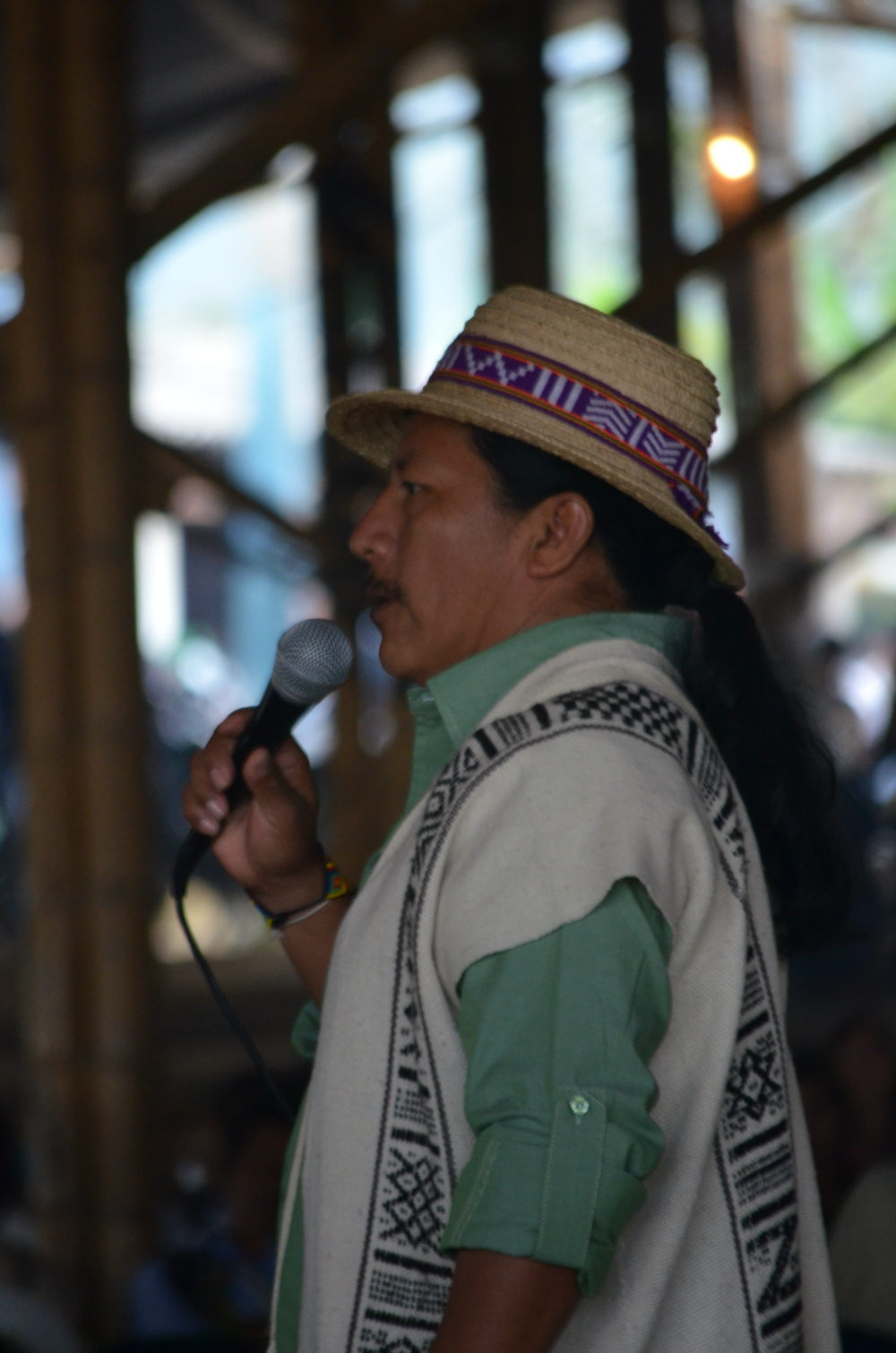 Feliciano Valencia speaking at the 43rd anniversary of the CRIC (Photo: Robin Llewellyn)

The number of deaths and displacements caused by the conflict has led the Inter-American Commission on Human Rights to issue precautionary measures for the Nasa communities of Jambaló, Toribio, San Francisco and Tacueyó, and to condemn killings such as the military shooting of Nasa youth Eduar Guetio Bastos. The UN Special Rapporteur on the rights of Indigenous Peoples James Anaya has urged the military to consult with indigenous authorities before establishing any military presence in the indigenous territories of Cauca.

The Army’s 29th Mobile Brigade engaged with the Jacobo Arenas Front of the FARC on the morning of the 20th in the area of Jambaló, displacing families who left for shelters while the Indigenous Guard remained to protect their assets. Feliciano Valencia says the Nasa had been condemning the FARC for using civilians as a cover for their attacks and for adopting symbols of the indigenous movement to confuse the army. He claims the attack on the Humanitarian Commission resulted from the Nasa insistence on autonomy and repelling all armed groups from their territory:

The FARC “don’t agree that we exercise our autonomy against all armed actors. They didn’t agree that we should established the rule of indigenous justice – that where we found transgressions we dealt remedies. This is what happened with the mission; it’s an act of retaliation against all these actions that we have carried out as indigenous people.”

The Nasa gained international headlines when they evicted an Army post from the sacred Berlin Mountain in Toribío, and have also successfully arrested, charged and imprisoned the FARC guerrillas behind the murder of eight indigenous villagers including four traditional healers.

“The militias of the FARC guerrillas have committed assassinations against members of the community”, Feliciano Valencia says, “we have applied our justice and this has made them furious. What happened with the humanitarian commission is that the guerrillas knew they were there, and they knew that they would pass, so they waited for them on the road and attacked them.”

Members of the Indigenous Guard during the 43rd anniversary of the CRIC (Photo: Robin Llewellyn)