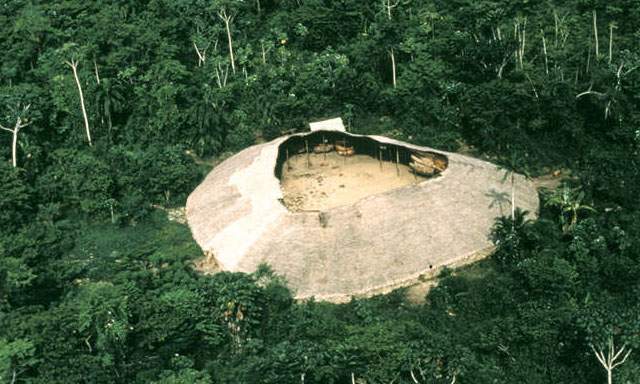 Indigenous community ‘wiped out’ by gold miners in southern Venezuela

A Yanomami "shabono" (communal hut) similar to the one that was reportedly attacked from the air. Photo: larepublica.pe
Support our journalism. Become a Patron!

An entire Yanomami community is believed to have been wiped out by illegal gold miners (garimpeiros) in southern Venezuela near the border with Brazil.

According to available testimony from three Yanomami survivors, who were out hunting on the day of the attack, in early July, a helicopter was seen flying over the remote village of Irotatheri, which is located in the headwaters of the Ocamo River in the Municipality of Alto Orinoco. The occupants of the helicopter then proceeded to destroy the community with firearms and, it appears, explosives.

It is unclear how many people died in the attack, but it is known that 80 men, women, and children lived at Irotatheri village. To date, only three Yanomami have been accounted for, the three hunters, who had to walk for six days to the nearest town of Parima-B to tell their story.

According to Luis Shatiwe Ahiwei, a leader of the Horonami Yanomami Organization, members of a nearby village went to Irotatheri to investigate. They encountered an unknown number of charred bodies and the community’s “shabono” (communal hut) burned to the ground.

On Aug 27, a joint statement (see below) was issued by HORONAMI and 13 other indigenous organizations mourning the attack and urging the Venezuelan State to open a criminal investigation, “To come to the place of the massacre and to adopt bilateral agreements with Brazil to control and watch the movement of garimpeiros in the Upper Ocamo”. They also condemned the government’s failure to take action against the garimpeiros despite the various aggressions that took place leading up to this recent massacre.

As Luis Bello, a lawyer in Puerto Ayacucho who defends indigenous rights, explained to the Guardian, the allegations are merely the latest in a series of abuses. “Reports of garimpeiros attacking different communities are becoming more and more frequent, and now we also hear of rivers being poisoned with mercury. We’ve reported to the authorities but we are so far away that is it all easily forgotten,” Bello said.

On Aug 29, Venezuelan authorities announced that they were setting up a commission to investigate the recent allegations.

Declaration from Indigenous Organizations of the Amazon regarding the Yanomami Massacre

1. We stand in solidarity with the Yanomami People in Venezuela and their organization HORONAMI, who was victimized in the month of July 2012, due to the most RECENT MASSACRE IN THE COMMUNITY OF IROTATHERI, located in the headwaters of the Ocamo River, Municipality of Alto Orinoco. The area of the massacre is within the area of influence of various Yanomami communities such as; MOMOI, HOKOMAWE, USHISHIWE and TORAPIWEI, of which all have been attacked, assaulted and invaded by illegal miners from Brazil (GARIMPEIROS) during the last 4 years.

2. We mourn this most recent violent attack against the Yanomami people that left an amount of dead that has not been completely determined but there are 3 survivors accounted for of approximately 80 Yanomami people who lived in the community Shapono in the Upper Ocamo. According to witness and survivor testimonies, Shapono was burnt and attacked with firearms and explosives. Witnesses and survivors were relocated to the community of Parima “B” between August 15th – 20th, 2012, where they informed of the tragic events to members of the organization HORONAMI, Venezuelan Authorities of the 52nd Brigade of the National Army and the Center for Investigation and Control of Tropical Diseases (CAICET).

3. We express our preoccupation that as of the year 2009 various entities of the Venezuelan State have been informed about the presence of GARIMPEIROS in the Upper Ocamo and about the different aggressions that have perpetuated against the communities of MOMOI and HOKOMAWE. These communities have been victims of physical violence, threats, gender violence and contamination of their water from the use of mercury that has left a number of Yanomami dead. None the less NO MEASURES WERE TAKEN TO REMOVE THE GARIMPEIROS FROM THE AREA or to create and implement a control plan regarding their access and mobility in the region when there has been an known increase in illegal mining in all of the Brazilian Amazon.

4. This situation does not only affect the rights to LIFE, PHYSICAL INTEGRITY AND HEALTH OF THE YANOMAMI PEOPLE, but also constitutes a new genocide and threat to the physical and cultural survival of the Yanomami. In this very moment when next year marks the 20th anniversary of the Massacre of HAXIMÚ in which 16 Yanomami women, children and elders were killed.

5. We solicit the National Government and other entities of the Venezuelan State to immediately OPEN A CRIMINAL INVESTIGATION, TO COME TO THE PLACE OF THE MASSACRE AND TO ADOPT BILATERAL AGREEMENTS WITH BRAZIL to control and watch the movement of garimpeiros in the Upper Ocamo, the place of the massacre and presence of Yanomami threatened by the uncontrolled actions of the garimpeiros. We remind that the failure to investigate and take the necessary measures as a result of the case of HAXIMÚ, could compromise the international responsibility of the Venezuelan State, for allowing foreign agents to attack Venezuelan nationals in their own territory.

Regional Organization of Indigenous Peoples of the Amazon (ORPIA)

Organization of Indigenous Women of the Amazon (OMIDA)