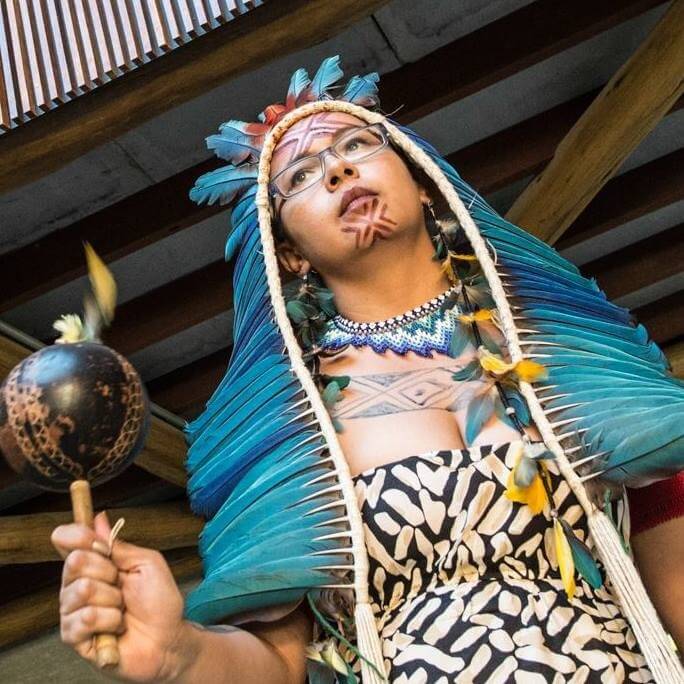 “The Indigenous genocide of America is the biggest genocide in the world, and we must join forces and fight for the end of this violence.” Daiara Tukano

An urgent plea for help has surfaced from the state of Mato Grosso do Sul in southern Brazil, where a local Indigenous activist has accessed various social media platforms to broadcast the current state of crisis, and ongoing genocide of Indigenous Peoples in the region.

IC recently covered the critical situation in Brazil, citing a 2014 CIMI report which revealed that violence against, and killings of, Indigenous Brazilians are most disturbingly – and statistically – on the rise.

Daiara Tukano, an Indigenous activist, feminist, teacher, and artist, who holds a Masters in Human Rights from the University of Brasilia, released this urgent message to the world, on August 31st:

“I send this message to the Indigenous relatives…from all over the world… I’m talking from Brazil, where we are facing a violent genocide.

For the last years, this violence has grown. They keep killing our chiefs, our elders…raping our women…poisoning our kids…our children…burning our houses…

In the state of Mato Grosso do Sul, in the South of Brazil, in the frontier with Bolivia [and] Peru, we are facing a war where hundreds have died. During this week, we lost more people than ever before. There is an army of the landowners who have corrupted the police – the [frontier police] and other militaries. They have corrupted the judges. They pay with money, as they are millionaires. They pay for our death, and they are killing us. So, I beg for help.

We, Indigenous People of Brazil, beg for your help. The world must know what is happening here. This year, we are receiving the World Indigenous Games and we must talk about it. I beg that [of] the athletes…because your people are sending your best archers, your best runners, your best fighters. But, we are not here for golden medals. We are here for our people, for those who are left behind, fighting and surviving, and protecting the earth, the water, the air. We mustn’t forget what we are here for. We mustn’t forget who we are, our Indigenous identities.

So I beg you please, spread the word. Tell the world what is happening in Brazil, and help us. You can help in so many ways! You can help just talking about it. Or, you can help spreading the news. Here in Brazil, we live a severe censure… In the media they only tell lies and criminalize us…and/or don’t even talk about it. But, the more [than] 300 Nations that live in Brazil are organized. We are together. And we will fight together…’til death. We will give our blood for our children and those who are to come. The Indigenous genocide of America is the biggest genocide in the world, and we must join forces and fight for the end of this violence.

Since the beginning, our people fought for human rights. Our great chiefs have been discussing what is human and what respect is. What is to be the law: to live in harmony…in harmony not only between peoples, but in harmony with nature. And, we have achieved many laws, all over the world. We have achieved many constitutions, many international agreements. But, what is the law if you don’t practice it? If you don’t act as it is written?

The Brazilian government knows everything that happens. We have chambers and committees of human rights in our congress, [in] the same way the United Nations has the Forum on Indigenous Issues and the laws, and the charts, and all these papers and letters. But here, we don’t see any law happening. This is a lawless land.

The conflicts in Mato Grosso do Sul remember scenes of forest movies ….Indians versus cowboys… It remembers the genocide of the beginning of the colonization. They [are] still saying this is not our land. They [are] still raping our women, killing our children, saying we are not part of society. We are treated as aliens in the land that sows…born…And we [are} still giving our blood to this Mother Earth.

IC reached out to Tukano, the day after the video surfaced, and she further imparted that on September the 2nd, Brazil’s Congress will vote on the infamous constitutional amendment, PEC 215. The notorious bill, originally proposed in 2000 by Congressman Almir Sá, would grant Congress the power to approve the demarcation of Indigenous territory. IC ran a story in July about one of the coordinated mobilizations in protest of the proposal. Representative Erika Kokay is quoted there, giving this warning about PEC 2015:

“PEC 215 and its appended action are intended to paralyze the demarcation of Indigenous lands, the titration of Quilombola Territories and the creation of Units of Conservation, as well as to permit the approval of large-scale projects within these protected areas, such as: hydroelectric dams, mining, extensive agribusiness, the building of highways, waterways for industrial transport, ports and railways.”

IC also ran a piece this past December describing some of the ongoing controversy surrounding the contentious legislation. The approval of the bill would effectively legalize the appropriation of Indigenous territory, which could pave the way for massive land grabs – a strategic move in the ongoing genocide described by Tukano. As a statement from Brazil’s Indigenous Maracana community asserts: “An Indigenous person without land is no longer Indigenous”.