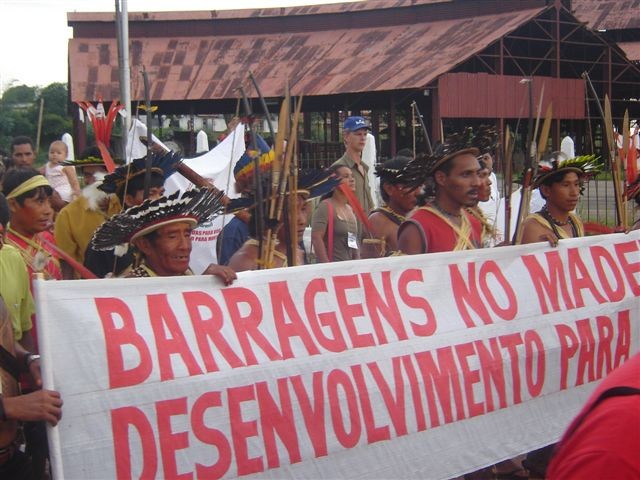 Indigenous People, local communities and labour groups in Bolivia and Brazil have declared an emergency in response to the Madeira River Hydroelectric Complex, a series of four dams along the Madeira river.

The Activist group, Root Force, explains that “Bolivia has [already] denied permission for two of the dams, one to be built entirely in Bolivian territory and the other along the border;” however, Brazil recently began working on the two dams in its territory (map), the Jirau and San Antonio.

Once completed, the dams would “flood and otherwise devastate Bolivian communities upstream, forcing the relocation of 300 known communities, as well as possibly destroying the territory of uncontacted indigenous communities,” says Root Force.

Biodiversity throughout the region is facing an equal threat. According to a fact sheet by International Rivers, the two dams will block the migration routes of Several species of large catfish and utterly destroy the habitats of thirty-three endangered mammal species — including the Spotted Jaguar, Giant Anteater, Giant Armadillo, and Giant Otter.

Marking the beginning of the end (unless there is a massive build-up of opposition), Brazil recently sent out eviction notices to 3,000 indigenous people in the region of the dam sites, giving them until August 30 to abandon their lands.

A video from 2006 that discusses the dams, their impact, and the efforts to stop it.