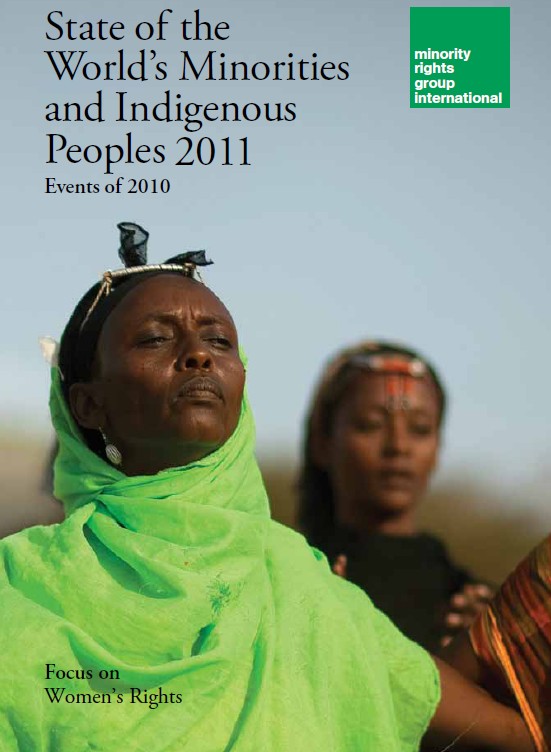 Indigenous and Minority women deliberately targeted for rape and other violence

Women from minority and indigenous communities are deliberately targeted for rape and other forms of sexual violence, torture and killings because of their ethnic, religious or indigenous identity, Minority Rights Group International (MRG) says in its newly released annual report.

In “State of the World’s Minorities and Indigenous Peoples 2011”, MRG documents the worldwide pattern of discrimination against women from minority and indigenous communities whether in times of conflict or in times of peace.

“Discrimination against minorities worldwide is time and again experienced by women as physical violence,” says Mark Lattimer, Executive Director of Minority Rights Group International. “In war and in peacetime, minority women are singled out for rape because they are less protected and less able to complain.”

The report cites numerous cases from armed conflicts in Iraq, Afghanistan, Somalia, Sudan, Democratic Republic of Congo, Sri Lanka, Colombia, Guatemala, Kyrgyzstan and Burma, where women from minority and indigenous communities have suffered systematic sexual and other violence specifically because of their identity.

In many of these countries, “rape has been used as a tool of war against women from minority communities,” says MRG.

“Minority and indigenous women are in particularly vulnerable positions because they often come from poor socio-economic backgrounds and live in remote areas”, MRG continues. “They have little access to justice and in many cases face discrimination from the police and the judicial system because of their minority status and because of their gender.”

For instance, according to the report, Dalit women in India face “multiple levels of violence due to caste, class and gender” on a daily basis. In Uganda, 100 percent of women from the Batwa community said they experienced physical violence and in many cases that violence is ongoing. In the UK, there have been increasing reports of violence against Muslim women who can be more easily identified by the hijab or head scarf they wear.

Like other women, minority and indigenous women also face violence from within their own community or their own families. In Canada and Australia, according to the report, the limited available data show high levels of violence against women within indigenous groups, but there are indications that complaints from such women are treated less seriously by the authorities.

The report also makes a strong case that, despite the full spectrum of violence that minority and indigenous women so commonly face, many of them are struggling for their rights to be recognized and treated as equals, to participate in decision-making, to lead their communities. And they are demanding justice.

“Women are not just the victims of violence, they are also its leading opponents,” says Shobha Das, Director of Programmes of Minority Rights Group International. “In many countries the struggle to stamp out sexual violence against minorities is being led by minority women activists themselves, sometimes at serious risk to their own safety.”

“Much has been achieved over the last decade to highlight the scourge of violence against women around the world. But development agencies, governments and human rights activists need to realise that not all women face the same obstacles, and that violence against women often has a particular ethnic or religious dimension,” Lattimer says.

State of the World’s Minorities and Indigenous Peoples 2011 is available for download at www.minorityrights.org