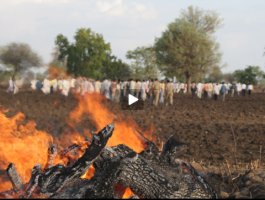 Here is a preview of ‘The Dying fields,’ a documentary that focuses on the ongoing agrarian crisis in Vidarbha, India.

There’s been a long history of struggle for farmers in India, but over the past 15 years the Government has removed all its support structures for farmers while promoting an unsustainable, high-input agriculture program they simply cannot afford to practice.

Then in 2003, the World Bank and International Monetary Fund opened India up to neoliberal globalization, which of course benefited many sectors–but most of India’s 1.3 billion people have yet to see the so-called ‘miracle.’ In fact, the majority find themselves stuck in a downward spiral from which there is no escape.

The crisis in Vidarbha makes that painfully clear. The farmers are now faced with the everyday reality of sinking global cotton prices, increasing costs of GM Seeds, and crushing debt.

For thousands of farmers, this has turned life into a burden of despair so great that they take their own lives. Anywhere up to 100,0001 farmers have committed suicide since 2003. There are thousands more on the verge of suicide today.

1. That figure according to the government of India, as relayed here. All other online sources indicate between 2-10,000 thousand. Whatever the number, it’s a crisis no less.

The Unreported Story
The government has done almost nothing to end this. Oh, they make lots of promises to provide relief–and there’s even some talk of suicide prevention programs–but everyone knows that’s not going to solve the problem.

If you take the time to look at international media, you’ll likely come to think of Vidarbha’s farmers as no more than a bunch of whiny, irresponsible, selfish, terrorist-like individuals. Why would we want to help people like that?

The unreported fact is the farmers are not just waiting for death. There are thousands actively working to provoke change in India right now. Numerous protests have been organized in recent months.

The most recent one occurred on the birthday of Mahatma Gandhi, October 2. On this day, during an international vigil held in over 50 cities around the world, more than 10,000 farmers gathered in Pandharkawada to call for the government to provide debt relief, increase the value of their cotton, and provide food security and health care facilities for the dying farmers.

Before the day was done, they also agreed to begin pursuing a course of agitation until their demands are met… Keeping true to their word, two days ago they set up an indefinite highway blockade.

There’s not much information available beyond this, but you can be sure the willing farmers will continue struggling. What choice is there?