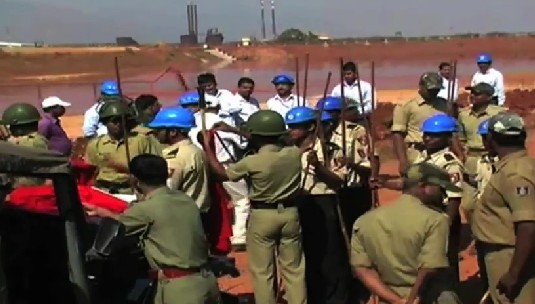 Vedanta Security Guards and India Police commingling on the day of the protest, January 21.
Support our journalism. Become a Patron!

A total of 47 indigenous people were arrested and another 5 needed hospital treatment after hundreds of Indian police and Vedanta security guards confronted a peaceful demonstration two weeks ago in the state of Orissa, India.

On January 21, a group of villagers came together to protest against a new toxic mine waste dump that threatens to disrupt their way of life.

Despite the peaceful nature of the protesters, as seen in the following video by Amnesty International, the 47 villagers were subsequently charged with “attempted murder” and “rioting”.

Amnesty International is calling for the obviously-false charges to be dropped. They’re also urging the government to release the protesters; and to properly take their needs and rights into account before letting the company proceed with the new waste dump.

Just prior to the arrests, Amnesty alleged that the Uk-based mining giant hasn’t done anything to clean up existing pollution at the site of its Lanjigarh aluminum refinery beside Niyamgiri mountain in Orissa.

Similarly, “The Indian authorities have remained silent on the issues of cleaning up the refinery and monitoring the health of local communities. They must act on this now,” said Amnesty International’s India researcher Ramesh Gopalakrishnan.

“The red mud pond, which collects toxic waste by-products from the refinery, covers an area of approximately 38 hectares. The pond is full to the brim and suffered serious leaks during last year’s monsoons,” explains Amnesty.

Two weeks ago, the High Court of Orissa rejected the company’s plan to expand the Lanjigarh refinery after finding that the project is in violation of India’s environmental laws.

The welcomed decision is the latest in a long line of legal setbacks for the company.