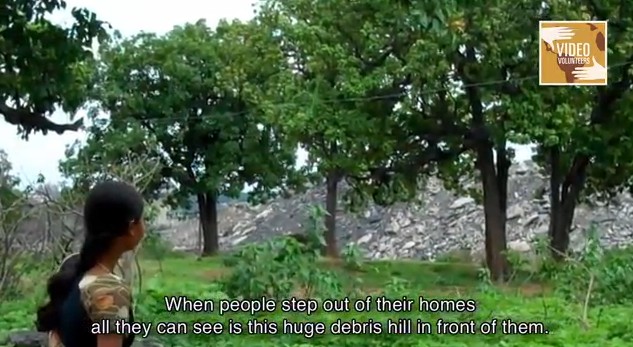 In this short video, IndiaUnheard Correspondent Mohan Bhuiyan documents the impacts of dumping coal mine debris on his village in Ramgarh District, Jharkhand, India.

Mohan writes that his village has actually been wedged in by two mining companies:

“300mts to the west of my village are the blackened coal mines of Central Coalfields Limited. Less than 300mts to the east are mining pits belonging to [Tata]. When the mining companies first arrived in my village, they came with promises of water, education, health, work and development. In 1984, they fooled us into acquiring the land on which we had our homes and our fields. But because the compensation and rehabilitation were never given, we refused to move.”

“For the last 20 years, we have been living in the most miserable conditions. The mining has destroyed our land. Our ponds and fields have dried up and become unusable. The air is polluted with dust and ash. It is unfit for breathing. The companies couldn’t care less. They were mining crores (tens of millions of dollars) worth of coal from our land and gave us nothing in return. From a self-sufficient agricultural village, we have been pushed into destitution. But at least we had our homes.”

Following this video report, which was published on October 25, 2012, Tata covered up an important road that village relies on, making it difficult for people to get access to the jungle and the river, both of which they depend on.

The villagers have asked company officials to clear out the massive piles of rock. When that didn’t work they tried to blockade the mine.

Now the officials are saying that they will clean up the road when they get the machinery, but who knows if they will keep their word.

Call to Action: Mohan requests you to call the Director of the West Bokaro Coal Mine, Mr Rajoria on 06545262486 and demand that:

“The road is cleared and repaired so that people of Ghatotand can access the forest and rover once again.”