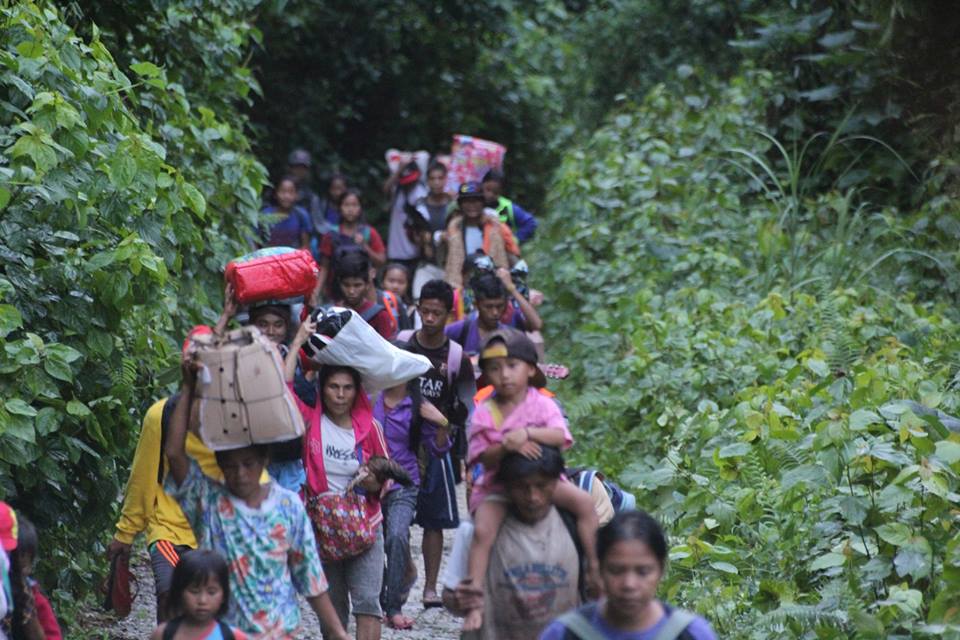 This month, hundreds of Lumad evacuated their homes out of fear of being attacked by the military. Photo: ALCADEV
Support our journalism. Become a Patron!

Last May, the government of the Philippines announced the decision to subjugate the southern island of Mindanao to Martial Law. Now, the state is using its repressive apparatus to continue its attacks against Lumad (indigenous) teachers.

On the night of July 5-6, 2017, nine Lumad communities in the hinterlands of Lianga, Surigao del Sur, were forced to evacuate after an intensification of Philippine military occupations on their ancestral territories. The occupations began on July 2, 2017 when 60 soldiers in full combat uniform arrived in Lianga. With the memory of the violent 2015 Lianga Massacre still fresh, the Lumads of Lianga evacuated for the second time in less than two years when military bomber planes began circling above their communities around midnight on July 5, 2017.

President Rodrigo Duterte’s declaration of martial law on the island of Mindanao on May 23, 2017 has been widely decried by Philippine national minorities and allied organizations, as it gives blanket protection and immunity for the military to perpetrate human rights violations, including the ongoing attacks on Lumad schools and communities.

Martial Law suspends habeas corpus and empowers the military to supersede civilian authorities in enforcing the law. Under the pretense of fighting terror, Duterte’s government has effectively levied its military power against some of the country’s most vulnerable populations.

Lumad communities have experienced increased militarization since the declaration of Martial Law, but state suppression of Lumad resistance and claims to self-determination through the use of force is nothing new. The Philippine military and its paramilitary counterparts have long targeted Lumads and their leaders because of their active defense against the encroachment on their lands by multinational mining corporations and other destructive industries.

Sign the petition to demand an end to martial law here: http://nafconusa.org/2017/05/notomartiallaw/

The Philippine military and their paramilitary forces have historically treated Lumad education as a threat. Under Martial Law, increased attacks on Lumad communities continue to threaten the operation of Lumad schools.

On July 5, 2017, the evacuation affected 633 students and 43 volunteer teachers from six Lumad schools in Lianga, including the Alternative Learning Center for Agricultural and Livelihood Development (ALCADEV). When military forces neared Sitio Han-ayan, Diatagon in Lianga on July 5, schools and farms closed in preparation for a possible evacuation. 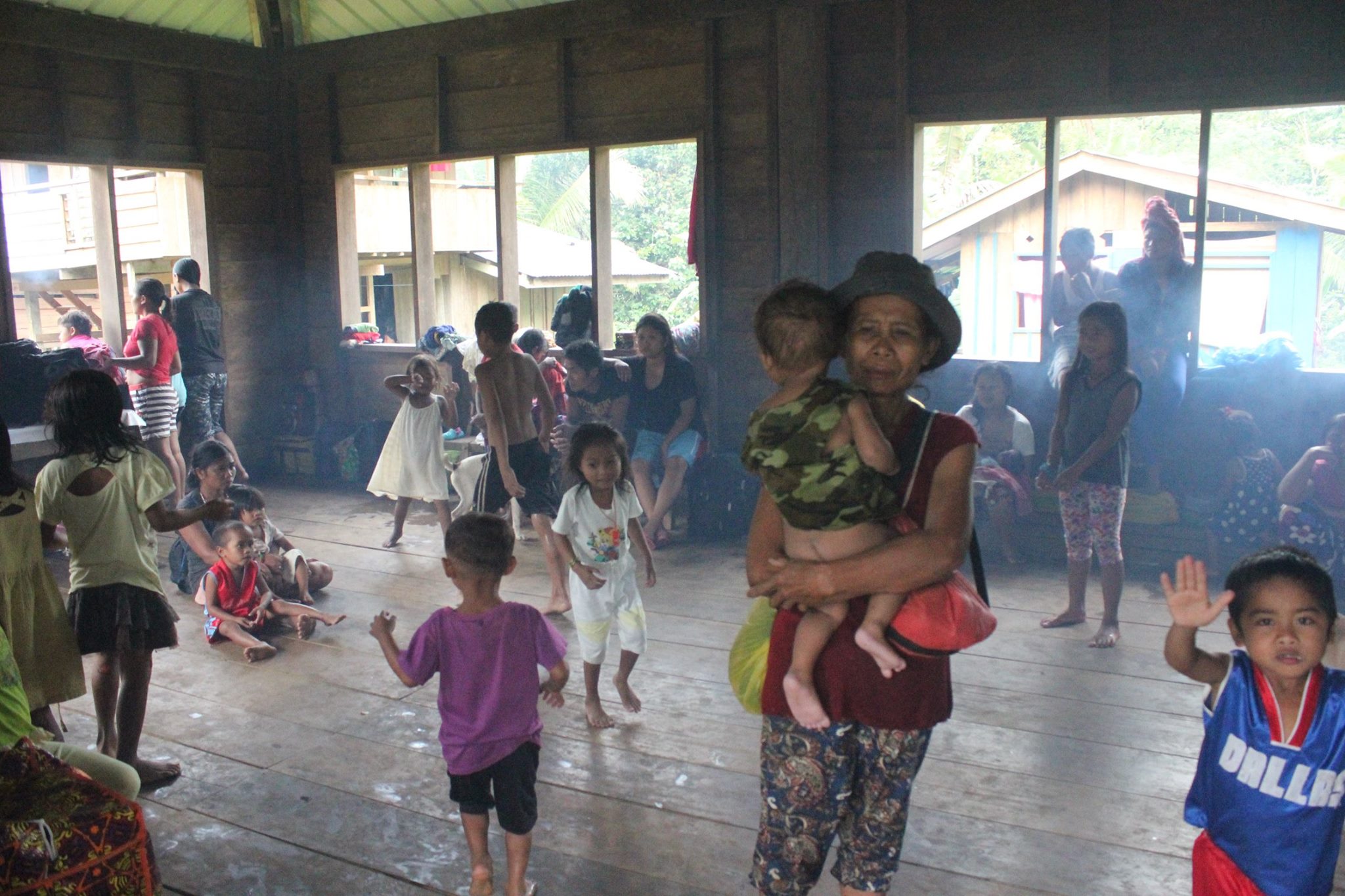 ALCADEV was established in 2004 to fill the void left by inaccessible government schools. The center caters to the specific needs of indigenous youth and their communities. According to former ALCADEV student Glorivic Belandres, “we learned to fight for our rights when others attempt to trample on it. This has become a threat to the military. As soon as we became educated, they found it difficult to deceive us.”

The Philippine military has attempted to destroy Lumad schools through military occupation, redbaiting, and the targeting of Lumad teachers. In the Lianga Massacre of 2015, ALCADEV director and anti-mining activist Emerito Samarca was one of three community leaders murdered by Magahat-Bagani, a paramilitary group created by the Philippine military.

Now, twelve teachers and community leaders of ALCADEV and the Tribal Filipino Program of Surigao del Sur (TRIFPSS) are facing fabricated charges of human trafficking. According to human rights group Karapatan, these charges are used to harass the teachers and other key witnesses to the Lianga Massacre. Annabelle Campos, a TRIFPSS literacy coordinator facing charges, points to their resistance against mining projects as another motivation for the harassment Lumad teachers and community leaders are facing.

In another case of paramilitary harassment, on June 12, 2017 teacher and chairperson of the Association of Community Educators (ACE), Ramel Miguel, was interrogated and threatened by four members of the Alamara paramilitary group in front of 55 school children inside Salugpungan School, a Lumad school in Davao del Norte.

Despite the implementation of Martial Law, Lumad students are standing up for their right to indigenous education.

From June 30 to July 10, 2017, Lumad students protested the militarization of their schools and attacks on their teachers by the Armed Forces of the Philippines and its paramilitary groups. Around 200 Lumad students and teachers held a Kampuhan (protest camp) in Davao City to demand that President Duterte end the militarization of Lumad communities in the face of martial law in Mindanao. 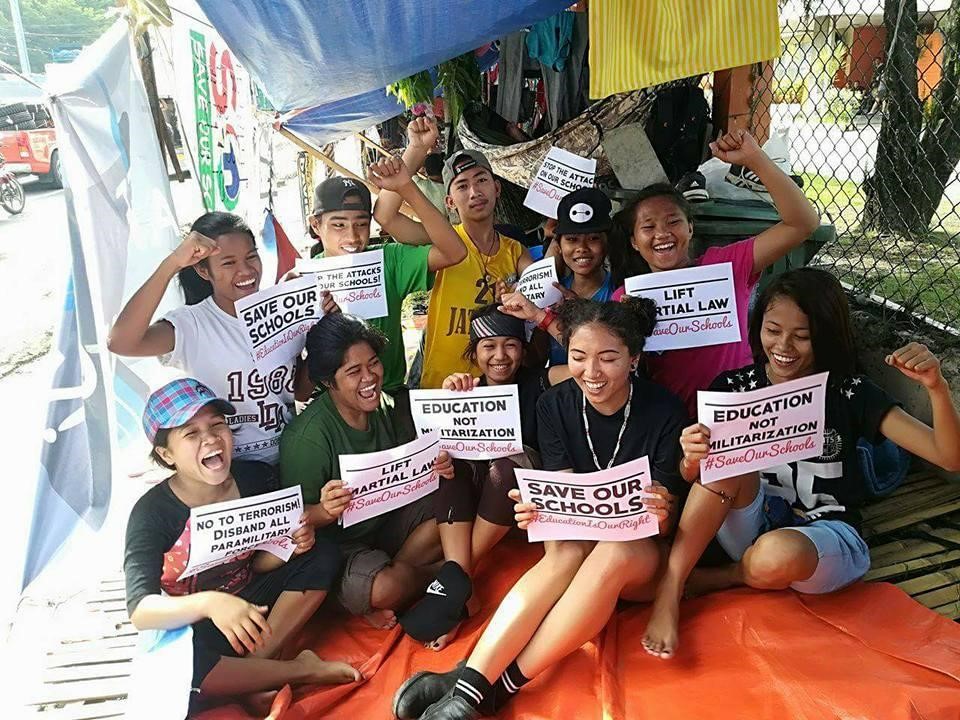 Photo: Save Our Schools Network

Lumad students have not been silenced by Martial Law. They will continue to demand that the government protect indigenous peoples’ right to education and self-determination.