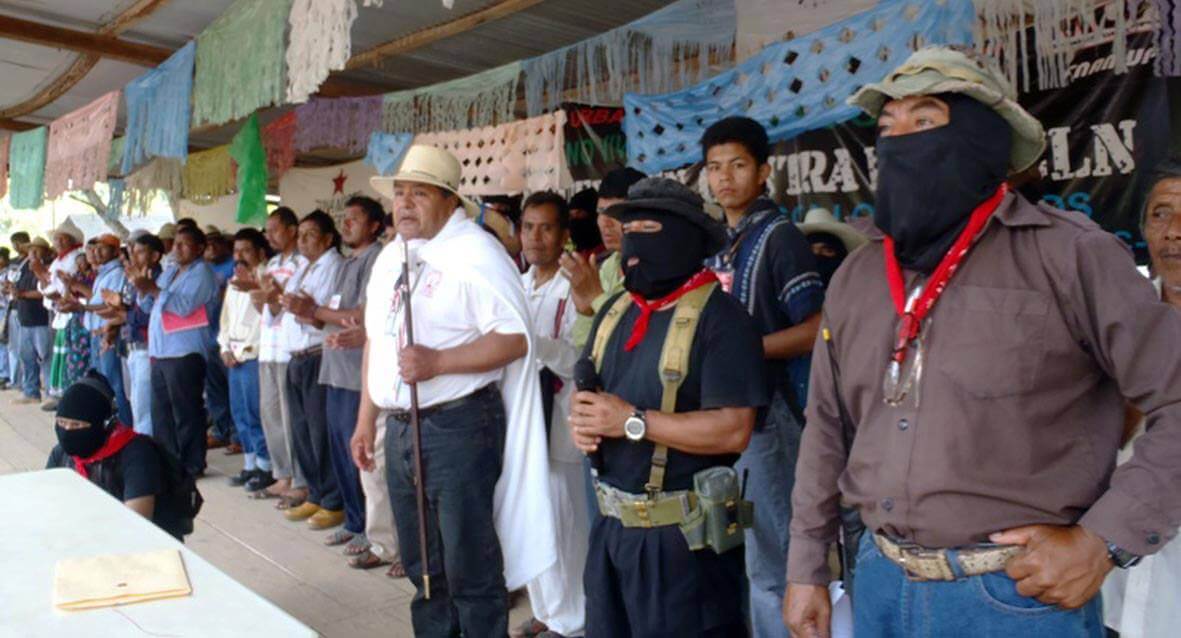 The words of Comandante Tacho, on behalf of the Indigenous Revolutionary Clandestine Committee – General Command of the EZLN, at the Inauguration of the First Exchange of Indigenous Peoples of Mexico with Zapatista Peoples.

COMPAÑERAS AND COMPAÑEROS OF THE NATIONAL INDIGENOUS CONGRESS:

COMPAÑEROS AND COMPAÑERAS OF THE INDIGENOUS PEOPLES WHO ARE VISITING US:

We greet you hoping that everyone has arrived safely to these Zapatista lands.

You have made a long journey from distant lands to meet us here in this corner of rebellious Zapatista lands of the Mexican Southeast.

Welcome, compañeras and compañeros of the originary peoples, the guardians of Mother Earth.

From the General Command of the Zapatista Army for National Liberation.

We hope that you have all arrived safe and sound in order to carry out this first very important exchange between the National Indigenous Congress and the Zapatista communities.

This exchange carries the name of the compañero “David Ruiz García”.

We send our most sincere greetings to all of our compañer@s insurgentes.

And to the compañeras and compañeros – elders, young people, and children – who are bases of support of the Zapatista Army for National Liberation.

As well as to all of the compañeras and compañeros of the Fuerzas Mexicanas de Milicias [Mexican Militia Forces] of the EZLN.

To the members of the MAREZ (Autonomous Zapatista Municipalities in Rebellion) and to all of the compañer@s who make up the Good Government Councils.

Compañeros and compañeras of the National Indigenous Congress.

We come to share our suffering and pain caused by the Neoliberal system.

But not only this.

We also come to share valuable knowledges, our experiences in struggle and organization, and our goals and challenges.

We do so in the face of the neoliberal capitalist invaders that have done us so much damage.

These invaders were not satisfied with the theft and looting carried out by the conquistadors in 1492.

Those conquistadors encountered the resistance of the peoples, tribes, and indigenous nations of these lands of this country called Mexico.

They killed those who opposed subordination to the Spanish monarchy.

These wicked invading tormentors stained their hands with indigenous blood and stole the richness cared for by our oldest ancestors.

They persecuted the Indian peoples of Mexico and all of Latin America with the goal of eliminating the indigenous peoples completely and banishing their existence.

They did not achieve this. That we are here now is proof.

However, communication from the communities of our ancestors was lost; the relations of these communities were lost.

But the wisdom and intelligence of our oldest grandparents was hidden from the Spanish invasion.

And with that the indigenous peoples remade their existence.

We grew, forgotten by the powerful, for 500 years in all of the corners of our Mexican homeland.

We as originary peoples were ignored, deceived, forgotten, exploited, and enslaved in their dominion for more than 500 years.

And now, through the rise of the neoliberal powers, the machine of destruction appears once again to disappear our peoples.

They have made it bigger and more modern, supported by laws and bad governments, in order to invade us once again.

It has a new plan of dispossession, dispossessing us of our mother earth using the machinery of the power of money, looting the riches that mother earth has held and kept safe for millions of years.

With this machine comes the death and destruction of our peoples and our mother earth.

But as the indigenous people that we are, we know that what is happening there is not a “conflict” but a MASSACRE, that the government of Israel is carrying out a war of extermination upon the PALESTINIAN people. Everything else is just words to try to hide reality.

But we also know, as the indigenous people that we are, that the PALESTINIAN people will resist and will rise again, that they will once again begin to walk and that they will know then that, although we are far away on the map, the Zapatista peoples embrace them today as we have before, as we always do, with our collective heart.

And here on our map, the power of money’s machine of war is without a brain, without memory, wicked, like a savage animal unleashed against our indigenous peoples of Mexico.

They do not care about the destruction and death of our entire peoples, tribes, and nations.

We as the indigenous peoples of Mexico are not protected by laws and by bad governments.

Our hope lies only in ourselves.

No one is going to come save us; absolutely no one will fight for us.

Not political parties, nor politicians, nor laws; there is nothing there for us.

Compañeras and compañeros. The political parties, laws, and bad governments have demonstrated this clearly.

They will not be able to keep deceiving us; they have shown what they are for the last 83 years. They all work in the service of transnational capitalists.

This is the earth from which we were born, that gave us life, and in which we will rest eternally.

So, compañeras and compañeros, today is the beginning of our walk together and our search for how we will defend ourselves communally. There is no more time.

We will work with wisdom and intelligence these days together.

We inaugurate this encounter of exchange under the name of compañero David Ruiz García, let his heart continue to walk in our step, today August 3, 2014, at 10 hours and 21 minutes.

Welcome to all of you.

Welcome here is the word of those who resist and struggle. Welcome is the ear that listens and the heart of a compañero.

Thank you very much.

From the Zapatista Realidad.

Comandante Tacho.
Mexico, August of 2014. In the twentieth year of the war against oblivion.