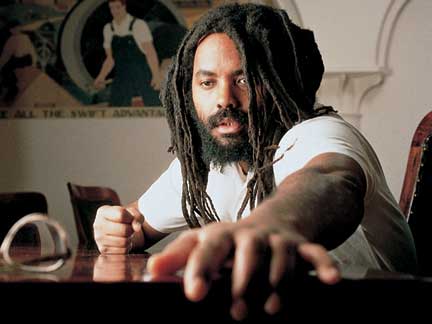 In Prison My Whole Life

“In Prison My Whole Life” is a new British documentary about Mumia Abu-Jamal, the renowned journalist from Philadelphia who has been on death row since 1983 for allegedly shooting Philadelphia police officer Daniel Faulkner.

The documentary follows William Francome in his effort to shed some new light on what happened on December 9th 1981, the day William came into the world–coinciding with the initial arrest of the former Black Panther.

Premiering on Thursday at two film festivals, “In Prison My Whole Life” brings some well-earned rejuvenation to the struggle of Mumia and his international support network.

The film features interviews from Angela Davis, Noam Chomsky Amy Goodman and a number of others, including some people who have never before shared their story about what happened that day on Locust Street. The film also prominently features the startling Dec. 9, 1981 crime scene photos that were discovered by German author Michael Schiffmann in May of this year. Never presented to the 1982 jury, these photos (taken by press-photographer Pedro Polakoff) “bolster claims of Mumia’s innocence and unfair trial,” according to Black Commentator columnist David A. Love.

Truth be told, there is a great of evidence that casts numerous doubts about his trial and alleged guilt, much of which is detailed in another documentary you can watch on google video.

I actually studied Mumia’s case about ten years ago; his was one of the first injustices I ever encountered as a budding young man. I remember first seeing him on a poster in downtown Winnipeg. When I saw the eyes of Mumia, I did not see the eyes of a killer, and that awareness compelled me to learn everything I could about Mumia and his case. I just knew things were not as we were told to accept, and I needed to understand why.

Now, having only seen the trailer of “In Prison My Whole Life,” (yesterday, on my birthday!) I find myself compelled once more–compelled to say that Mumia’s time has now come.

In Prison My Whole Life

Keep updated by reading Action Alerts at www.mumia.org and www.moveorg.net. To download Mp3s of Mumia’s commentaries, visit www.prisonradio.org or www.fsrn.org. Send our brotha some love and light at: Mumia Abu-Jamal, AM 8335, SCI-Greene, 175 Progress Dr., Waynesburg PA 15370.