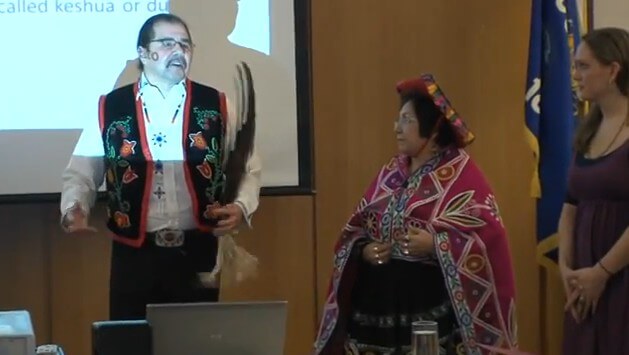 The indigenous languages and culture of the Ojibwa tribe and the Quecha are introduced through words, song and dance in a lecture by two faculty members at the University of Wisconsin-Stevens Point. “Importance of Indigenous Languages: Ojibwa and Runasimi (Quechua)” was presented on Tuesday, April 8, 2014, by Spanish Professor Elia Armacanqui-Tipacti and Social Work Professor Sonny Smart.

The seventh of an eight-part 2013-14 Community Lecture Series sponsored by the College of Letters and Science at UW-Stevens Point, this presentation offers a short history of the the Ojibwa and Runasimi languages, how each connect to indigenous culture and how the languages have survived western influence and attempts to discontinue them through historic federal policies and missionary schools. A demonstration of song and dance explores how languages and cultures interact with each other.

Elia Armacanqui-Tipacti is a native of Peru and specializes in Latin American, Portuguese and Brazilian colonial literature. She has also studied women’s roles in colonial times as a means to uncover the silent voices of the past. She has taught at UW-Stevens Point since 2002, and has served as an adviser to the Spanish Club and Latin American student organization. She has twice won the UW System Outstanding Women of Color in Education Award.

Sonny Smart coordinates the Native American Rural and Social Work program and Native American Family Institute at UW-Stevens Point, where he has taught since 1990. He is a member of the Bad River Band of Chippewa of Wisconsin and has been adopted into the Menominee tribe. A certified therapist, he also serves as consultant for Wisconsin Native American tribes, has been a tribal judge and actively participates in powwows as a dancer, judge and master of ceremonies.