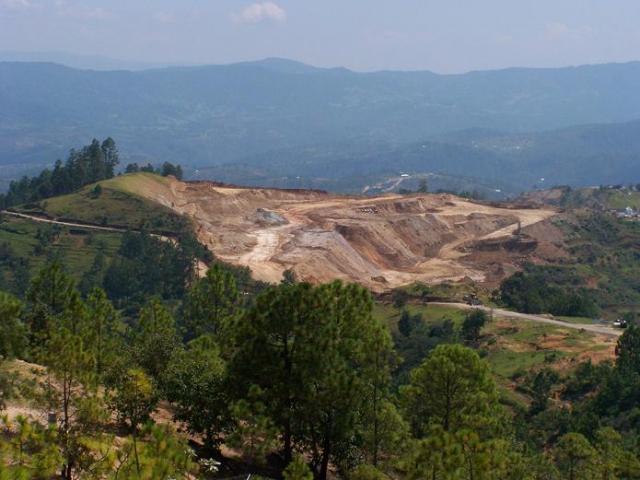 If Goldcorp cares so much, it should shut down the Marlin mine

A view of the Marlin mine, taken from the road from San Miguel Ixtahuacán to Sipacapa. Photo COPAE
Support our journalism. Become a Patron!

You would be hard-pressed to find a gold mine more strongly condemned by the international community than Goldcorp’s Marlin mine in the municipality of San Miguel Ixtahuacan, department of San Marcos, Guatemala.

In the last 12 months alone, at least five damaging studies have been published which show that Goldcorp, through its subsidiary Montana Explorada, has wrongfully contaminated the environment, undermined the physical and mental health of local Indigenous communities and openly violated international human rights standards.

One particular study by the University of Michigan and Physicians for Human Rights, helped to convince the Inter-American Commission on Human Rights (IACHR) to call for the suspension of all activity at the mine and take steps to protect the health of nearby indigenous communities.

In March 2010, the International Labor Organization (ILO) also formally requested the mine’s suspension along with several other projects in Guatemala, due to the excessive number of complaints they had received from NGOs and local communities.

Unfortunately, it was little more than lip service. To date, the government has taken no action against the Marlin mine.

In addition to the ILO committee and the IACHR, the UN Committee on Elimination of Racial Discrimination (CERD) has condemned the Marlin mine, along with UN Special Rapporteur James S. Anaya, not to mention US members of Congress and a long list of NGOs from the Council of Canadians and Mining Watch to Amnesty International and the Center for International Environmental Law. Even the well known (but widely ignored) Permanent Peoples Tribunal (PPT) condemned the mine.

The veritable continuum of opposition also includes activists and independent journalists who routinely speak out against the project, not to mention the local Indigenous communities themselves, who have been, since day one, working to protect their homes, their food, their water supply, their physical health.

More than a dozen short films and documentaries have also been produced, including “The Business Of Gold In Guatemala“, “Sipakapa No Se Vende/Sipakapa Is Not for Sale” and 8 Mayan Women . The very latest film, which is being screened this month in Guatemala, Honduras and Canada, is “El oro o la vida” (Life for Gold) by the Guatemalan NGO Ceibaguate.

It’s pretty rare to see so much opposition to a mining project, even though, with industry standards what they are, there are plenty of other projects as deserving; whether it’s the Porgera mine in Papua New Guinea and the Ramu Nickel mine in West Papua, the Jadugoda Uranium mines in India. The list goes on.

But even so, Goldcorp is effectively in a class of its own, as one of the only companies to employ the “Hitler-Stalin technique” (telling bold-faced lies to have it taken for the truth) as a matter of course. Writing for the Vancouver Media Co-op, Dawn Paley provides a good example in September 2010:

“This morning (Sept 23), Vancouver based mining company Goldcorp announced that they would be donating $10 million to Simon Fraser University to fund the school’s arts centre in the already controversial Woodwards building in the Downtown East Side. The school will be known as the Goldcorp Centre for the Arts.

“Goldcorp officials, of course, worked hard to spin the donation into yet another indication of their generosity and benevolence towards marginalized communities. After all, what could possibly be wrong with charity?”

Being the responsible Canadian citizen that he “is”, Goldcorp’s President and CEO went on to proclaim that “Goldcorp is committed to making a positive difference here in Vancouver as well as those communities where we operate our mines.”

It’s unremarkable as far as propaganda goes; but that’s sort of the point. Goldcorp knows that it has to win the hearts and minds of their investors, along with that of key Guatemalan officials and the Canadian public. If they can’t win those hearts and minds, then they’re investors will drop them in a heartbeat. And that is unacceptable.

There are plenty of other examples, like the time Goldcorp said they would sit down and talk with the Mayans; but instead of going to the meeting they agreed to, they went to a courthouse to place an absurd number of false charges against a group of local Mayans.

Then there was the time Goldcorp said that the health problems in communities near the mine weren’t the result of exposure to dangerous chemicals; but rather the result of “bad hygiene”, a “lack of water” and “fleas”.

As much international opposition as there is to the Marlin mine, there will be more in the months ahead. One could even say that there must be, since there is clearly so much at stake, whether we’re talking about the health and the basic rights of the Mayans or the legitimacy of the ILO and the IACHR and the UNCERD.

And of course, there is the matter of corporate social responsibility (CSR). As defined by Wikipedia, CSR is a mandate by which companies regulate themselves to ensure they actively comply with “the spirit of the law, ethical standards, and international norms” in order to “encourage a positive impact through its activities on the environment, consumers, employees, communities, stakeholders and all other members of the public sphere.”

Donating a few bucks to some University that doesn’t need it while suing groups that threaten to make you look bad and hiring armed men to terrorize families who only want to live healthy lives, isn’t the behaviour of a socially responsible company. More like an overzealous tyrant with a b-movie complex.

Goldcorp would have us believe that they’re the real victims in all of this. They say the Marlin mine has never done anything wrong and that they’ve always tried to do the right thing, within the bounds of Guatemala’s legal system.

But these are just words, like any claim that the world’s going to end in 2012. Whatever words may be spoken, we have to rely on actions.

So, if Goldcorp is such a responsible company that cares so much about the safety and well-being of the the Mayan People (not to mention their basic human rights) then, first and foremost, they should respect the IACHR’s request. In fact, they should do it even if the government of Guatemala says they don’t have to do a thing.