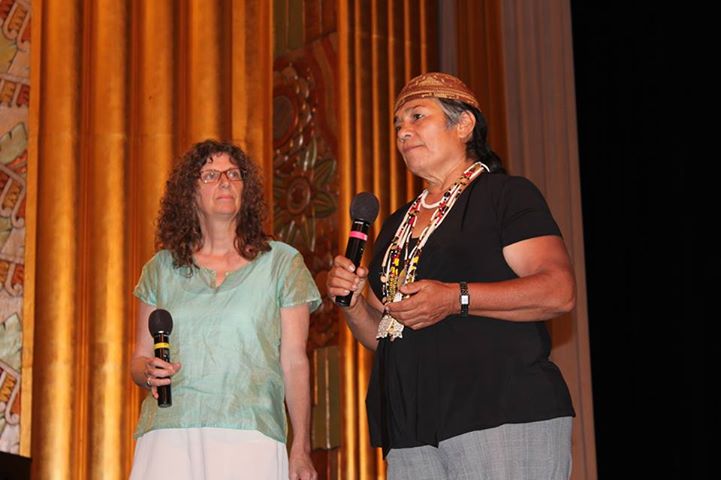 Caleen Sisk, Chief of the Winnemem Wintu Tribe, speaks against the raising of Shasta Dam as Jessica Abbe, writer for the On Sacred Ground series, listens at the premiere showing of Episode 1: Pilgrims and Tourists, at the Cascade Theatre in Redding on Sept 14.
Support our journalism. Become a Patron!

Caleen Sisk, Chief of the Winnemem Wintu Tribe, speaks against the raising of Shasta Dam as Jessica Abbe, writer for the On Sacred Ground series, listens at the premiere showing of Episode 1: Pilgrims and Tourists, at the Cascade Theatre in Redding on Sept 14.

The Bureau of Reclamation will be holding a 75th anniversary celebration of Shasta Dam on Saturday, September 21 – and the Winnemem Wintu Tribe and their allies will be there to protest plans by the federal agency to raise the huge dam on the Sacramento River.

Tribal leaders say the dam raise will inundate many of the sacred cultural sites not already covered by the waters of Shasta Lake. They also oppose the dam raise because it is designed in conjunction with Governor Jerry Brown’s Bay Delta Conservation Plan to build the peripheral tunnels.

The construction of the twin tunnels would hasten the extinction of Central Valley Chinook salmon and steelhead, Delta and longfin smelt, green sturgeon and other species, as well as threaten salmon and steelhead runs on the Trinity and Klamath rivers.

Tribal members and their allies, including members of other Indian Tribes, fishermen and grassroots environmentalists, will meet at the Shasta Dam during the “celebration” at 10 a.m.

“We want them to know we’re not going to be idle no more and that they need to deal with us as real people,” said Winnemem Wintu Chief Caleen Sisk. “There’s nowhere else we can go in the world to be Winnemem. If they raise the dam, they will be taking away our future as a people.”

“We can’t go to Hoopa or Navajo land to learn to be Winnemem,” Sisk said. “This is our Mother Country. We want our salmon back and we want access to participation in the process as a viable community. In their environmental impact report, they list everything we have as archeological sites. However, that’s where we dance – that’s where we bring our girls across the river in the puberty ceremony.”

Sisk is urging people to bring a sign, bring a boat or just come and support the bring the salmon home and No Dam Raise option.

“We are not going to fall silent for this BOR organized celebration priming the pump for a further raise which will drown the rest of our sacred places, which will reduce the chance for introducing salmon above the dam, which will put a big ol’ gravel pit in our neighbors’ neighborhood and hugely and negatively impact the houseboater’s businesses and campgrounds,” said Sisk. “It’s not just our issue!”

This year, the Bureau has been “celebrating” the 75th anniversary of Shasta Dam with a series of events starting on September 15 and ending on September 21. A Bureau press release describes the dam as “an engineering marvel responsible for water distribution to over 38 million Californians.”

The Tribe and its allies this week held a series of film showings to show the other side of the anniversary, starting with the premiere of the wonderful film, Toby McLeod’s “Pilgrims and Tourists,” showing the commonality of struggles between the Winnemem in California and the indigenous people of the Altai Republic of Russia, at the Cascade Theatre in Redding on Saturday, September 14. They also held screenings of Restore the Delta’s “Over Troubled Waters” and Will Doolittle’s “Dancing Salmon Home.”

“To make room for the reservoir, the BOR stole our lands, destroyed our salmon run, and submerged our burial grounds and sacred sites,” according to Sisk. “Many Winnemem were left homeless, and we still have yet to receive to the ‘like lands’ that were promised to use in the 1941 Indian Lands Acquisition Act, which authorized the stealing of our land.”

Sisk added, “When will there be justice for the Winnemem Wintu? Is it right for the BOR to be celebrating the stealing our lands, our burials, our wild Chinook Salmon, our way of life – leaving us with nothing and then calling us an “unrecognized tribe!”

“It is time to Idle No More for the Lenda Nur! (winter chinook salmon). The McCloud River, a world class fishing river, should have the wild Chinook back. The same ones that were sent to New Zealand are ready to come back,” Sisk said.

“There is nothing more powerful than a belief that has come of time. Our time has come!” she concluded.

For more information on the impact of Shasta Dam upon the Winnemem Wintu, you can read Marc Dadigan’s superb article, U.S. Celebrates Dam; Wintu Say It Is ‘Scar That Will Never Heal’

You can learn more at: http://www.shastadamraise.com