IC presents “The Canary Effect: Kill the Indian. Save the Man”

The Screening of The Canary Effect is now over. If you still wish to see the film, consider purchasing the film. Visit www.thecanaryeffectmovie.com for more info. 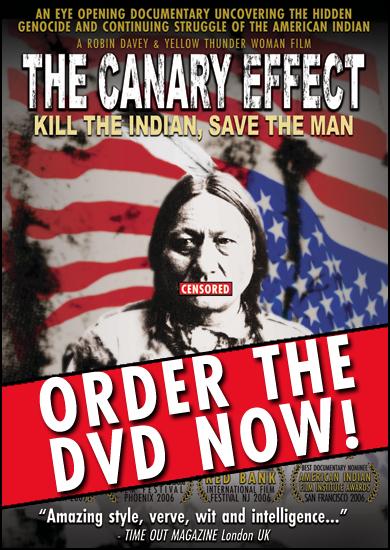 Based on facts, the Award Winning documentary, The Canary Effect is a culmination of Yellow Thunder Woman’s first hand experience growing up as a Native American and Robin’s passionate empathy of the need to bring such truths to a wider audience. This is the directors, Robin Davey & Yellow Thunder Woman’s debut film and has been a hit on the International film festival circuit.

Delving deep into the often misunderstood and frequently over looked historic realities of the American Indian, The Canary Effect follows the terrifying and horrific abuses instilled upon the Indigenous people of North America, and details the genocidal practices of the US government and its continuing affects on present day Indian country.

Featuring interviews with the leading scholars and experts on Indian issues including controversial author Ward Churchill, the film brings together the past and present in a way never before captured so eloquently and boldly on film.

Born and raised in Southern England, first and foremost a musician – Robin created many music videos for his own bands which led to him directing projects for Disney, Interscope, Geffen and Universal Records. He has recorded with artists of such stature as Mick Jagger (Rolling Stones) and Dave Stewart (Eurythmics); in addition to working on major movie film scores for both Alfie and Be Cool. In 2003 the eponymous album he co-wrote and produced for Native American blues-rockers Indigenous reached number three on the Billboard Blues chart. Robin is the co-founder writer/musician/producer of the band The Bastard Fairies whose first video “The Greatest Love Song” won Best New Music video at The American Indian Motion Picture Awards in 2006.

A member of the Yankton Sioux Tribe in South Dakota, Yellow Thunder Woman is a direct decendant of the great Ponca Chief Standing Bear. The youngest of fifteen children and daughter of former A.I.M., (American Indian Movement) and International Treaty Council member Greg Zephier – she grew up with not only a deep knowledge of her people’s history but also a rich understanding of the realities of reservation life. As well as directing, Yellow Thunder Woman is a talented painter and songwriter. She is also the co-founder, vocalist/lyricist for the internet phenom band The Bastard Fairies.

Those appearing in the movie include:

Ward Churchill, an author, activist and Professor of Indian Studies at Colorado University. His books include A Little Matter Of Genocide, Kill The Indian Save The Man and Struggle For The Land.

Charles Abourezk, an Attorney at Law in Rapid City, and director of the film Tatoo On My Heart. He is also a current Supreme Court Justice for the Rosebud Sioux Tribe.

Other films and videos

You Are on Indian Land https://intercontinentalcry.org/you-are-on-indian-land/

Before There Were Parks: Yellowstone And Glacier Through Native Eyes https://intercontinentalcry.org/before-there-were-parks-yellowstone-and-glacier-through-native-eyes/

A Conversation with John Mohawk https://intercontinentalcry.org/a-conversation-with-john-mohawk/

How the Province of British Columbia got its name https://intercontinentalcry.org/how-the-province-of-british-columbia-got-its-name/

Songs of the Colorado https://intercontinentalcry.org/songs-of-the-colorado/