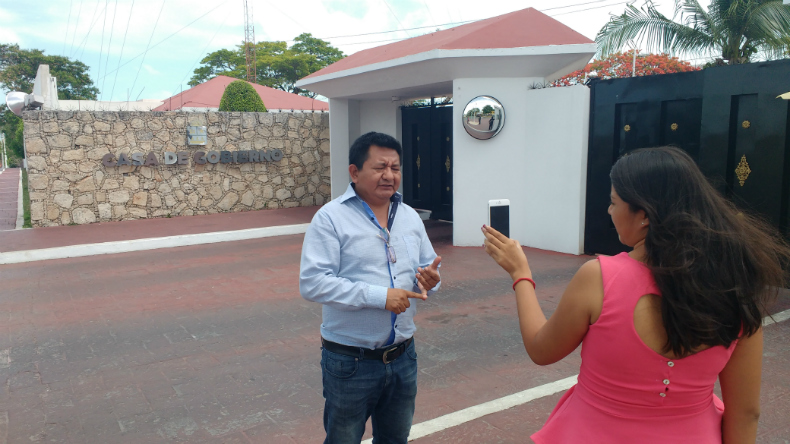 Pedro Canché, the acclaimed ‘Maya Journalist’ of Mexico’s Yucatan Peninsula, has joined the ranks of teachers and mentors at the Ká:nen School of Journalism—the world’s first online learning environment dedicated to empowering a new generation of ethically-motivated and security-conscious journalists from remote and marginalized communities around the world.

He joins fellow Mexican journalist Jorge Luis Sierra—an ICFJ Knight fellow and former Iraq war correspondent whose expertise in cybersecurity lead him to develop a digital crowd-sourced mapping tool to track crime, corruption, and attacks against journalists; as well as the award winning Canadian journalist John Schertow, the founding editor of IC—a leading publication on human rights violations against Indigenous Peoples and the frontline battles being waged to prevent climate change and save the world’s most vulnerable ecosystems.

This announcement comes a day after Pedro Canché’s name appeared on two “narco-blankets”—communiqués used by drug cartels such as the Zetas—which were hung up in two locations of Cancún, Quintana Roo, threatening Canché and another journalist Amir Ibrahim with death. The Maya journalist, however, is convinced that political groups belonging to members of the Mexican government who lost power in 2016’s elections are behind the threats and using the cartels preferred method of communication to cover their tracks.

Mexico currently ranks as one of the most dangerous places on the planet to practice journalism with over 100 media professionals murdered since 2006. After over two decades working as a reporter, Canché has become accustomed to operating in such a dangerous environment. He first drew the ire of a powerful politician in the mid-nineties while investigating Governor Mario Villanueva’s witch-hunt against Mayans suspected of sympathizing with the indigenous resistance movement EZLN (Zapatista Army of National Liberation) operating in the mountains of Chiapas bordering the rainforests of the Yucatan.

Governor Villanueva would later be sentenced to 131 months in a U.S. Federal prison for laundering millions of dollars of narcotics bribe payments from the Juarez Cartel —but it was Pedro Canché’s later work exposing the corruption and abuse of power of one of his successors, Governor Roberto Borge, that made him famous in his home country for his adversarial journalism. This past April, he was referred to by The Guardian as “a cause célèbre in Quintana Roo and across Mexico as yet another symbol of the country’s struggle for a free press.”

The recent accolades, however, coverup a much humbler past for the Maya journalist—one in which he never attended high school, and taught himself how to read Spanish by analyzing the labels on groceries or detergent. His passion for journalism was first sparked as a teenager while he listened in on the stories of the newspapermen who frequented a hotdog stand where he worked in Carillo Puerto—the provincial capital of the Maya Zone on the Yucatan. At nineteen years old, he networked while boiling hotdogs, and after scoring the home phone number of a correspondent from Notimex, he began passing on reports from the marginalized jungle communities he grew up in.

The entrenched racism against indigenous peoples in Mexico meant he had a much harder handicap to overcome than most to break the glass ceiling into the journalism industry—but that would not deter him. After seeing foreign tourists taking photos of themselves on the famous beaches of the Mexican Caribbean, he saved up his money from work to buy a second-hand Pentax 8mm and began practicing photography himself. His photos, however, were different to the cheerful selfies of tourists at the Maya ruins of Chichen Itza, Coba, and Tulúm: he photographed potholes, police receiving bribes, as well as a boy swimming in a lagoon contaminated with rubbish—which became Canché’s first piece published in a newspaper with his name in the byline. “When I saw it, nothing could stop me” Canché later told the reporter Guillermo Rivera, who had travelled to Quintana Roo in 2015 to interview the Maya journalist while he was being detained in Carillo Puerto Prison on trumped up charges of “sabotage”.

Two decades after the young Maya was first fascinated by newspapers while working a hotdog stand, he was now being treated as an ‘enemy of the state’ under Governor Roberto Borge and imprisoned on August 30th, 2014—guilty, according to Quintana Roo’s compromised courts, of having sabotaged the water-supply of tens of thousands of people. Reporters Without Borders stated that the charges were “absurd” and other Free Press organizations pointed to the real reason behind his detention were no doubt his photos published in the acclaimed investigative weekly Proceso a little more than a week earlier of Mayans protesting against the government, as well as a video he uploaded to Youtube challenging Governor Borge to a public debate on Freedom of Expression in the town square of Carillo Puerto—the capital of the Maya Zone.

Inside prison, Pedro Canché was beaten and had his clavicle and scapula broken. Amnesty International expressed its alarm that Quintana Roo’s authorities had denied the journalist medical treatment despite the gravity of his injuries. Canché´s writing material was also confiscated, but he still managed subvert censorship with the help of Article 19, the London based Free Press organization spearheading his legal defense, who published his smuggled letters as a Diary of a Prisoner of Conscience.

Despite an independent judge ruling due process had been denied to the journalist, his detention continued. The world famous Mexican journalist Lydia Cacho stated that Canché “poses a danger to Governor Roberto Borge both as a journalist and as an indigenous Mayan activist.” The Maya journalist would survive an assassination attempt inside Carillo Puerto Prison but was released nine months after his arbitrary detention began on May 29, 2015 and then dedicated his freedom to Mexico’s many journalists that had been killed in the line of duty.

After his release, the Maya journalist founded his own online newspaper Pedro Canche News—which today receives an average of 100,000 hits per month— focusing on government corruption and the violence engulfing Quintana Roo, as well as the rights of the disenfranchised Maya Peoples on the Yucatan peninsula.

The Mexican politician responsible for the arbitrary detention of the journalist, former governor Roberto Borge, was detained himself six weeks ago by Interpol in Panama City on charges of money laundering—and Pedro Canché’s report on how the powerful ex governor was now being made to clean toilets inside a Panamanian prison sent shockwaves around the country which had become accustomed to corrupt politicians committing crimes with impunity.

Pedro Canché has been offered asylum outside of Mexico, but his belief in the importance of investigative journalism to hold Mexico’s profoundly corrupt political class to account as well as document human rights abuses being perpetrated against the Maya Peoples of whom he has become a leading voice keeps him in his native soil. He is excited to be able to teach and mentor through the Ká:nen School of Indigenous Journalism in an online learning environment to help the next generation of aspiring indigenous journalists carry the torch into the future, as well as share with established reporters in the field of environmental reporting ways to better understand and work with and within remote and indigenous communities on the frontlines of the planet’s fight against catastrophic climate change.

“Mediocre journalism only creates confusion in society and more mediocrity” Pedro Canché told IC. “There is not a drop of sweat involved because there is nothing to contribute. Real journalism creates informed opinions, it is the antidote to make members of society stop being zombies. Nevertheless, the sweat involved is as thick as drops of blood.”

“We started Ká:nen precisely for this reason,” adds John Schertow. “We want to protect the integrity of journalism, help open new pathways to the truth and make sure that seasoned journalists can separate themselves from the long line of indignities that Indigenous Peoples have faced because journalists don’t consider the local impact of their work or take on stories without any real understanding of indigenous customs, cultures, needs and rights. To that end we are deeply honored to welcome Pedro Canché who exemplifies the integrity, the grace and the sheer force of will that we hope to instill in all of our students.”