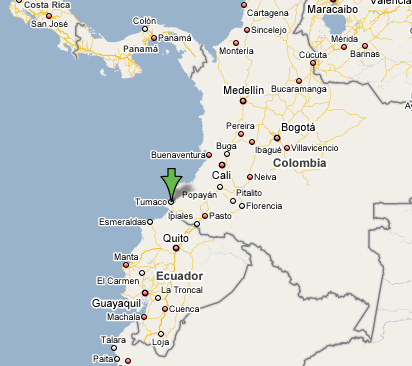 Since Tuesday, over 1000 Awá people have fled their land in the Province of Narino, Columbia, to escape a recent outbreak of violence between the Colombian army and the Revolutionary Armed Forces of Colombia (FARC).

As of Thursday, 1,018 Awa–more than half the group under the age of 16–has gathered in the village of Inda Sabaleta, some 25 minutes from their communities.

This recent event marks the 19th time a group of 50 people or more have been displaced in the Province this year.

From the UNHCR – The area is part of the department of Nariño, which in recent years has suffered some of the worst violence in Colombia. Since the start of 2007, there have been 18 cases of mass displacement involving more than 50 people moving at one time within Nariño, forcing more than 10,000 people out of their homes. Armed combat, presence of irregular groups, targeted killings and landmines all contribute to the rising trend of forced displacement. There are an estimated 21,000 Awá in Ecuador and Colombia.

This new crisis coincides with a Constitutional Court hearing seeking more information from the government on measures in place to protect indigenous people within the context of forced displacement. During a hearing scheduled for today (Friday), representatives of indigenous groups from all over Colombia, including the Awás from Nariño, are expected to present the situation in each of their communities. At the invitation of the Constitutional Court, UNHCR will also take part.

Under the United Nations Guiding Principles on Internal Displacement, the State has special obligations to prevent the forced displacement of indigenous people and other people with a special relation to the land. This hearing was called after Colombia’s Constitutional Court found last year that there were “persistent gaps” in specific attention to the rights of indigenous people, which could put at risk the cultural survival of displaced communities.

There are 87 different indigenous groups in Colombia, which together make up some 3 percent of the country’s total population (42 million). The groups comprise one of the richest and most varied indigenous heritages in the world. Their cultural survival depends greatly on being able to remain on their ancestral territories, and any displacement puts them at extremely high risk.