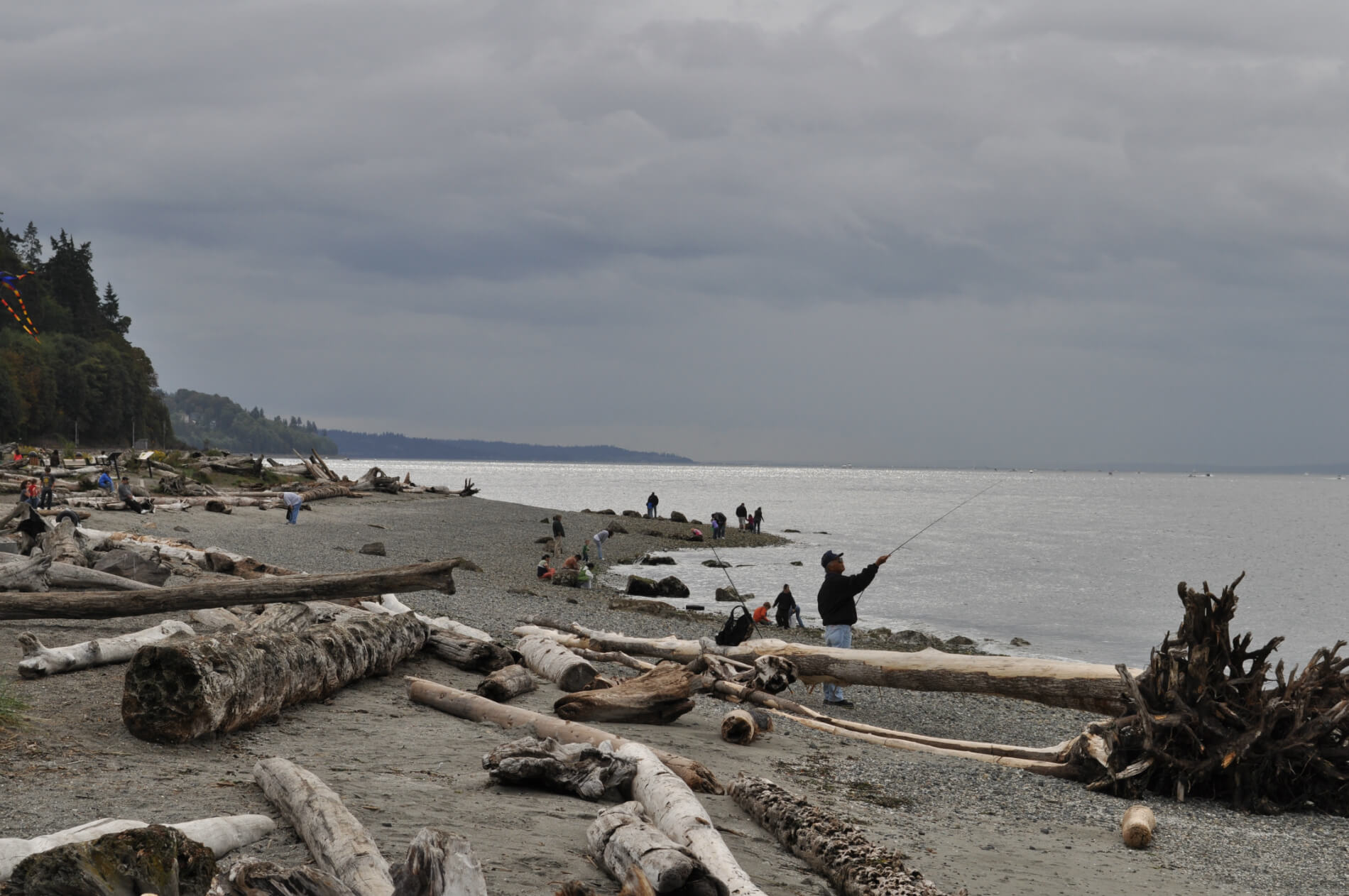 How do tribal nations’ treaties figure into climate change?

U.S. courts rarely favor environmental protections as a right — except when it comes to tribes expressing their treaty rights.
The Lighthouse Park in Mukilteo, Washington, where the Treaty of Point Elliot was signed in 1855. The treaty established the Suquamish Port Madison, Tulalip, Swin-a-mish (Swinomish), and Lummi reservations. Photo by Joe Mabel
Support our journalism. Become a Patron!

Over the years that Ray Fryberg Sr. has worked at the Tulalip Tribes Natural Resources Department, he’s watched climate change subtly reshape the region. Located near the cool waters of Puget Sound in Washington state, the tribe is actively dealing with the already-apparent transformation of traditional territories: eroding shorelines, raising spring tides, and warming waters that hurt salmon by pushing food sources north. “Climate change is an everyday topic in our office,” Fryberg says. “The tribes seem to be the last bit of a vanguard the environment has.”

Over the past several decades, tribal nations have fought on that environmental vanguard through the powerful mechanism of treaty rights. This has won tribes major victories for land and water rights, as well as stalled or defeated coal terminals and gas pipelines. To date, none have directly used treaty rights to tackle climate change head on. But across Indian Country, as climate threats become clearer, more are beginning to wonder: Why not?

Can tribal nations successfully sue the federal government over climate change-related violations of treaties? And if so, what would that look like?

“I see huge opportunity in certain instances for using treaty rights, because we have had success in that context,” says Elizabeth Kronk Warner, professor and director of the Tribal Law and Government Center at the University of Kansas School of Law and member of Sault Ste. Marie Tribe of Chippewa Indians. “Courts have found that there can be this right to habitat protection in order to protect the treaty right.”

The idea of treaty-protected habitat played out in the fight against the two cases of Millennium Bulk Coal and Coyote Island terminals in Washington state, where the Yakama Nation, the Confederated Tribes of Umatilla Indian Reservation, Nez Perce Tribe and others argued that a coal terminal would harm salmon and treaty-protected fishing rights. So far, treaty rights have addressed climate change only as part of a broader argument, such as in opposition to the Keystone XL pipeline, but climate change itself has not been the primary subject of litigation (in part because there is no law about climate change in the U.S., as Interior Secretary David Bernhardt pointed out last week in a Senate hearing). And, critically, those lawsuits did not place the burden of addressing climate change on the United States, a notion that has proven difficult.

In 2005, for example, the Inuit Circumpolar Conference filed a complaint against the United States to the Inter American Commission on Human Rights, alleging greenhouse gas emissions from the U.S. were causing melting sea ice, rising sea levels and irreparable damage to Inuit life and culture — a first attempt to hold the U.S. accountable for their role in global climate change. The complaint failed when the commission was unwilling to look at the Inuit’s findings that the U.S.’s greenhouse gas emissions were damaging their traditional territory.

Still, Martin Wagner, managing attorney of Earthjustice’s international program, who was involved with the petition, said the complaint was groundbreaking in how it attempted to tackle climate change through the courts as a moral problem: “The petition was a really powerful statement by the Inuit of their rights, and of the connection between climate change and human rights. It instigated a global conversation about that relationship.”

Since then, human rights experts have called for the recognition of the right to a healthy environment, which 110 countries already acknowledge, as well as the U.N. Declaration on the Rights of Indigenous Peoples — but the United States does not. “The courts in the United States have long been of the view that there is no right to a healthy environment or any particular level of environmental quality,” says Michael Burger, executive director of the Sabin Center for Climate Change Law. “And, the government doesn’t have an obligation to protect those things, at least under the constitution.”

Treaty rights, on the other hand, do oblige the United States to certain environmental protections for tribal nations. It’s just that they haven’t been applied to climate change directly.

The question that hasn’t been tested, then, is whether treaty rights can in some way address one of the biggest challenges in climate litigation: Who should be held accountable for the costs and causes of climate change? Since treaties were made between tribes and the U.S., a treaty case would be directed at the federal government. Others are taking that tack too, the most successful attempt being the case Juliana v. US, brought by 21 young people suing the U.S. government over their right to “a climate system capable of sustaining human life,” in the words of a judge who ruled on the case.

To tie climate change to treaty rights, a case must point to the actual treaty language. While possible, “it would probably be quite difficult to find something in a treaty that places a duty on the United States to do something, or refrain from doing something, connected to climate change,” said Robert Coulter, executive director at the Indian Law Resource Center and citizen of the Citizen Potawotami Nation. And, whenever a tribe uses treaty rights in a courtroom, there is some risk that the treaty could be diminished. Because of that, tribal governments are cautious about when to pursue a case with treaty rights.

One plausible example, though, is the right to fish “at usual and accustomed grounds.” That phrase appears in at least seven treaties with dozens of Pacific Northwest tribes. What if, due to species shifting from climate change or erosion from rising waters, that right could no longer be fulfilled? Species shift is a major side effect from climate change; one study shows how salmon shifting north to colder waters means First Nations fisheries could decline by almost 50% by 2050. Such a case has not been tried, and would not play to the strengths of the U.S. judicial system.

“The judicial branch is not well suited, I don’t think, to these sort of leaps that need to be taken between a very global, general problem and a specific action,” says Robert Anderson, director of the Native American Law Center at the University of Washington, and a member of the Bois Forte Band of Ojibwe. Still, there is power in shifting the conversation, as the Inuit did in 2005 and the 21 young people are now. “We lawyers like to think we can litigate anything and win it and change the world, but the fact is it’s really incremental,” Anderson says. “If you can use these cases, whether they’re enforceable or not, to shift public opinion, that’s really where the action is.”

Anna V. Smith is an assistant editor for High Country News. Email her at annasmith@hcn.org

This article was originally published by our media partner, on High Country News. It has been re-published at IC with permission.