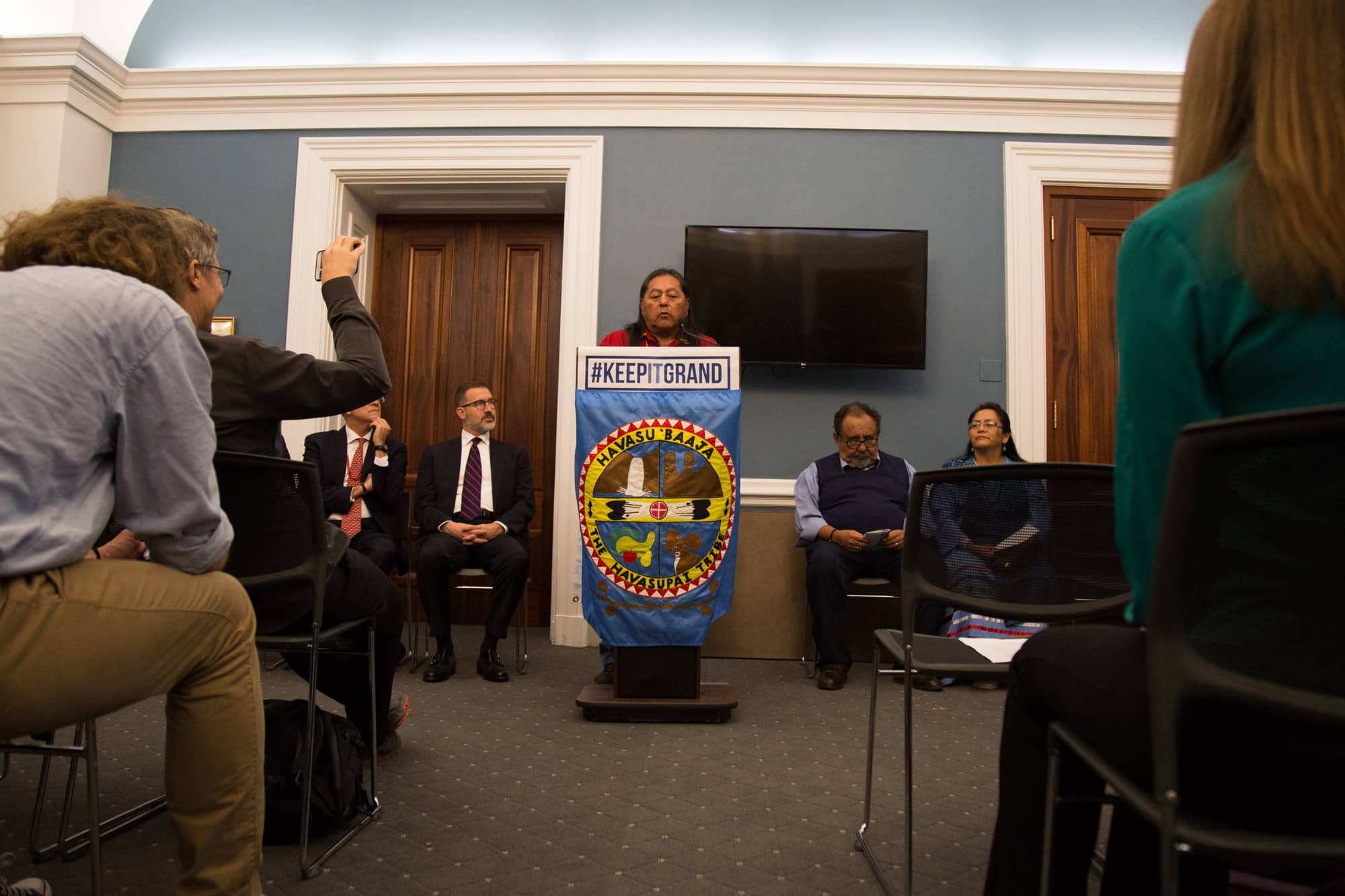 Havasupai Tribe Councilman Richard Watahomigie speaks about the cultural and environmental benefits of preventing mining around the Grand Canyon. (Photo by Harrison Mantas/Cronkite News)
Support our journalism. Become a Patron!

WASHINGTON – The House voted 236-185 Wednesday to permanently ban uranium mining on just over 1 million acres around the Grand Canyon, on a largely party line vote in which each side accused the other of fear-mongering.

Republicans said the bill would do little to protect the Grand Canyon while killing mining jobs and making the U.S. reliant on other countries – some hostile – for uranium for our power and weapons.

But Democrats said the real threat is to the contamination threat the mining poses to a popular natural treasure and to residents of the area, including tribes that live in and around the canyon. In a news conference after the vote, they called it a major step toward safeguarding spiritual and cultural lands.

“In 2019, our Havasupai voices were heard after 30 years,” said Carletta Tilousi, a councilwoman for the Havasupai Tribe, said after the vote. 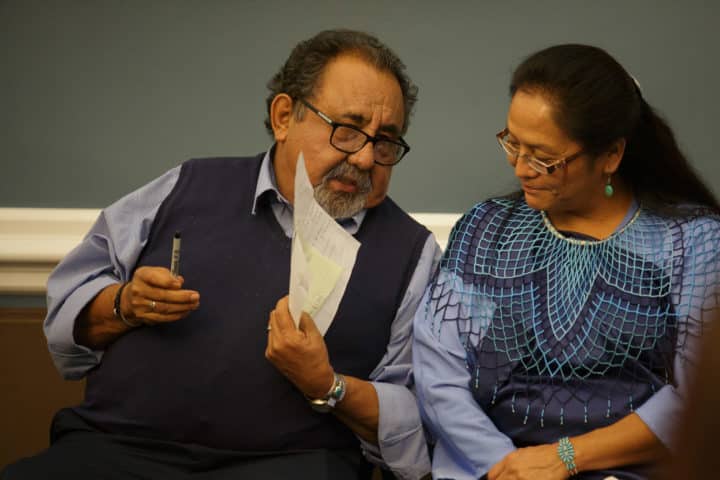 Rep. Raul Grijalva, D-Tucson, chats with Havasupai Tribe Councilwoman Carletta Tilousi after House passage of a bill ban uranium mining near the Grand Canyon. The Havasupai had longed said a ban is needed to protect their water supply. (Photo by Harrison Mantas/Cronkite News)

The victory lap came hours after Rep. Paul Gosar, R-Prescott, blasted the bill during House debate as a threat to national security and to northern Arizona’s environment and economy. He claimed the bill would gut up to 4,000 jobs and cost the state $29 billion in economic activity.

“This has nothing to do with the Grand Canyon. This has everything to do with monopolization and removing part of the segment that we promised future generations,” Gosar said.

Gosar also accused Democrats of using Native American tribes and the public as “pawns” by suggesting that the bill would affect the park itself.

“It’s sad when we use them as pawns,” Gosar said on the floor of the House. “When we have a press conference and they don’t even know what they’re coming to the press conference for. That’s sad. America, wake up.” 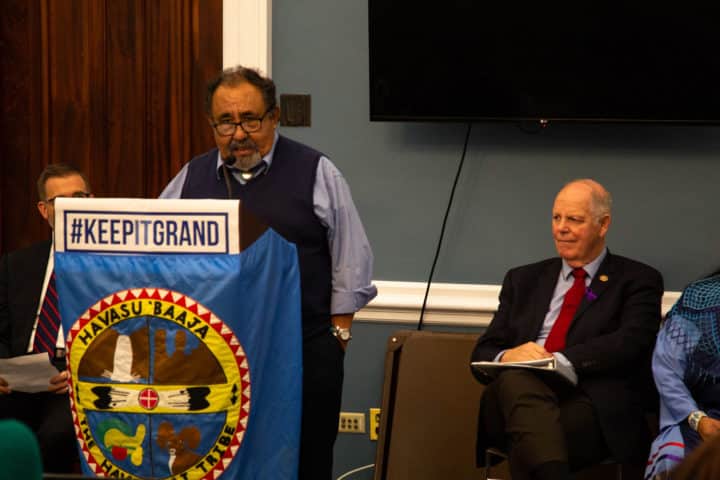 The bill’s lead sponsor, Rep. Raul Grijalva, D-Tucson, called Gosar disrespectful for suggesting tribes that had spent decades fighting new uranium mines in the region did not know what was at stake.

“To make those comments is not only insulting to all of us, but particularly mean to the people who have been fighting this fight for so long,” Grijalva said.

He rejected arguments that the bill would hurt Arizona’s mining industry, saying it is time to stop “rehashing the same worn-out arguments.”

“The idea that we need to mine around the Grand Canyon to meet our energy needs is false,” Grijalva said during debate. “There is ample data to show it, and national security and nuclear nonproliferation experts have routinely raised the alarm this fear mongering about supplies is based on fantasy.”

Grijalva was joined by Arizona Democratic Reps. Ann Kirkpatrick of Tucson, Tom O’Halleran of Sedona and Greg Stanton of Phoenix, in cheering the proposal as a way to protect the Colorado River. Grijalva pointed to mines on both the north and south rims of the Grand Canyon that he said contaminated millions of gallons of water before they produced ore.

Former Interior Department Secretary Ken Salazar in 2012 imposed a 20-year moratorium on new uranium and other hardrock mining permits 355,000 acres in the Kaibab National Forest, more than 600,000 acres owned by the Bureau of Land Management, and nearly 24,000 acres where ownership is split between private owners and the federal government.

The House bill would make that moratorium permanent, if it is passed by the Senate and signed into law by the president. Critics called both steps unlikely, but Grijalva said Wednesday he is optimistic about the bill’s chances in the Senate.

Critics include Mohave County Supervisor Buster Johnson, who said he sees no negative impacts from uranium mining on the area – but a big downside from not mining.

“People want to talk about climate change and carbon footprints. Nuclear reactors are carbon-free, and bring a lot of inexpensive power that people have come to rely on,” he said.

Johnson, who has testified previously before committees on the bill, said uranium mining in the Grand Canyon is vital to national security and clean energy development.

“We have the richest uranium deposits here in Arizona,” he said. “Without being able to mine that, we’re totally dependent upon foreign uranium to run our nuclear reactors and our ships at sea and all the things that we need for our military.”

But Kevin Dahl, Arizona senior program manager for the National Parks Conservation Association, said there is too much at stake in mining that close to the Grand Canyon to even take the chance.

“The risk is too great. Mining companies have forever said, ‘There will be no impact,’ and, ‘We’ll clean this up,’” Dahl said.

This article was originally published by Cronkite News. It has been re-published at IC under a Creative Commons License.