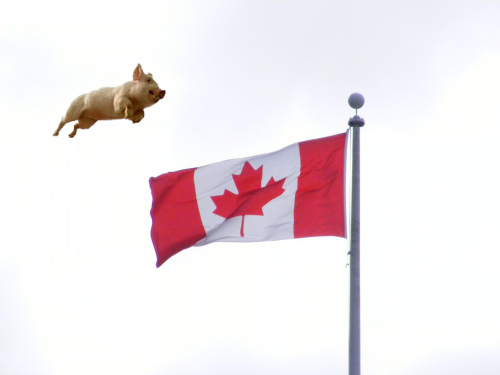 House of Commons calls for implementation of Declaration

Can pigs fly? Well you may be surprised to know one skyrocketed passed the House of Commons on Tuesday. Amazingly enough, it happened just as the House announced their support of the United Nations Declaration on the Rights of Indigenous Peoples.

Courtesy of the Western Shoshone Defense Project (WSDP), here’s a joint statement on the matter (of the announcement by the House of Commons, that is)

Photo by abdallahh,
modified and republished here under a Creative Commons License

Indigenous peoples’ organizations and human rights groups welcome yesterday’s decision by the Canadian Parliament to endorse the United Nations Declaration on the Rights of Indigenous Peoples.

The Declaration was adopted by the UN General Assembly on September 13, 2007 in a historic vote by an overwhelming majority of member states. Canada was one of only four states to oppose the Declaration. The government of Stephen Harper has since claimed that the Declaration is not applicable in Canada. This claim has no legal basis and is unprecedented in Canada’s foreign and domestic policy.

On Tuesday, April 8, the House of Commons passed a resolution to endorse the Declaration as adopted by the UN and calling on Parliament and the Government of Canada to “fully implement the standards contained therein.”

“The UN Declaration on the Rights of Indigenous Peoples provides a road map for the reconciliation of Indigenous and non-Indigenous peoples in Canada and around the world,” says Mary Simon, President Inuit Tapiriit Kanatami. “Aboriginal peoples in Canada welcome the commitment of the majority of Parliamentarians to work with us to implement urgently needed human rights standards.”

The UN Declaration affirms minimum human rights standards necessary for the “survival, dignity and well-being of the Indigenous peoples of the world.” These include the right of self-determination, protections from discrimination and genocide, and recognition of rights to lands, territories and resources that are essential to the identity, health and livelihood of Indigenous peoples. The Declaration also explicitly requires that all provisions are to be balanced with other rights protections and interpreted in accordance with principles of justice, democracy, non-discrimination, good governance and respect for the human rights of all.

“The rights affirmed in the Declaration are vital to our lives as Indigenous peoples and to the generations still to come,” says Beverley Jacobs, President of the Native Women’s Association of Canada. “We deeply appreciate the fact that the majority of Members of Parliament were prepared to do the right thing and endorse the Declaration.”

During the House of Commons debate over the resolution, Conservative government spokespersons claimed that the Declaration would undo centuries of Canadian treaties with Indigenous peoples.

“This government’s latest arguments against the Declaration show just how ridiculous their position has become,” says Chief Wilton Littlechild, international chief for Treaty Six. “The UN Declaration explicitly states that treaties and other agreements with Indigenous peoples are to be honoured and respected. I worked with Canadian diplomats to draft the treaty provisions in the Declaration. We just want the Canadian government to live up to that promise.”

Human rights Declarations become universally applicable upon their adoption by the UN General Assembly, regardless of how individual states vote. Indigenous peoples and human rights organizations hope that today’s vote will have a positive impact on Canada’s domestic and foreign policy.

“Canada’s reputation as a human rights advocate continues to suffer as a result of its ongoing opposition to the Declaration. Despite the government’s opposition, this vote in the House of Commons is an important step in the implementation of the Declaration”, says Grand Chief Edward John, Political Executive Member of the First Nations Summit.

“The Canadian government’s unreasonable opposition to the UN Declaration has undermined Canada’s influence on the international stage,” says Alex Neve, Secretary General, Amnesty International Canada. “Now that Parliament’s official position is to support and implement the Declaration, we hope that the government will take advantage of this opportunity to restore Canada’s reputation for principled support of international human rights standards.”

In a message to Canadian Parliamentarians delivered on the eve of the vote, noted Indigenous rights advocate and Chair of the UN Permanent Forum on Indigenous Issues, Victoria Tauli Corpuz, said: