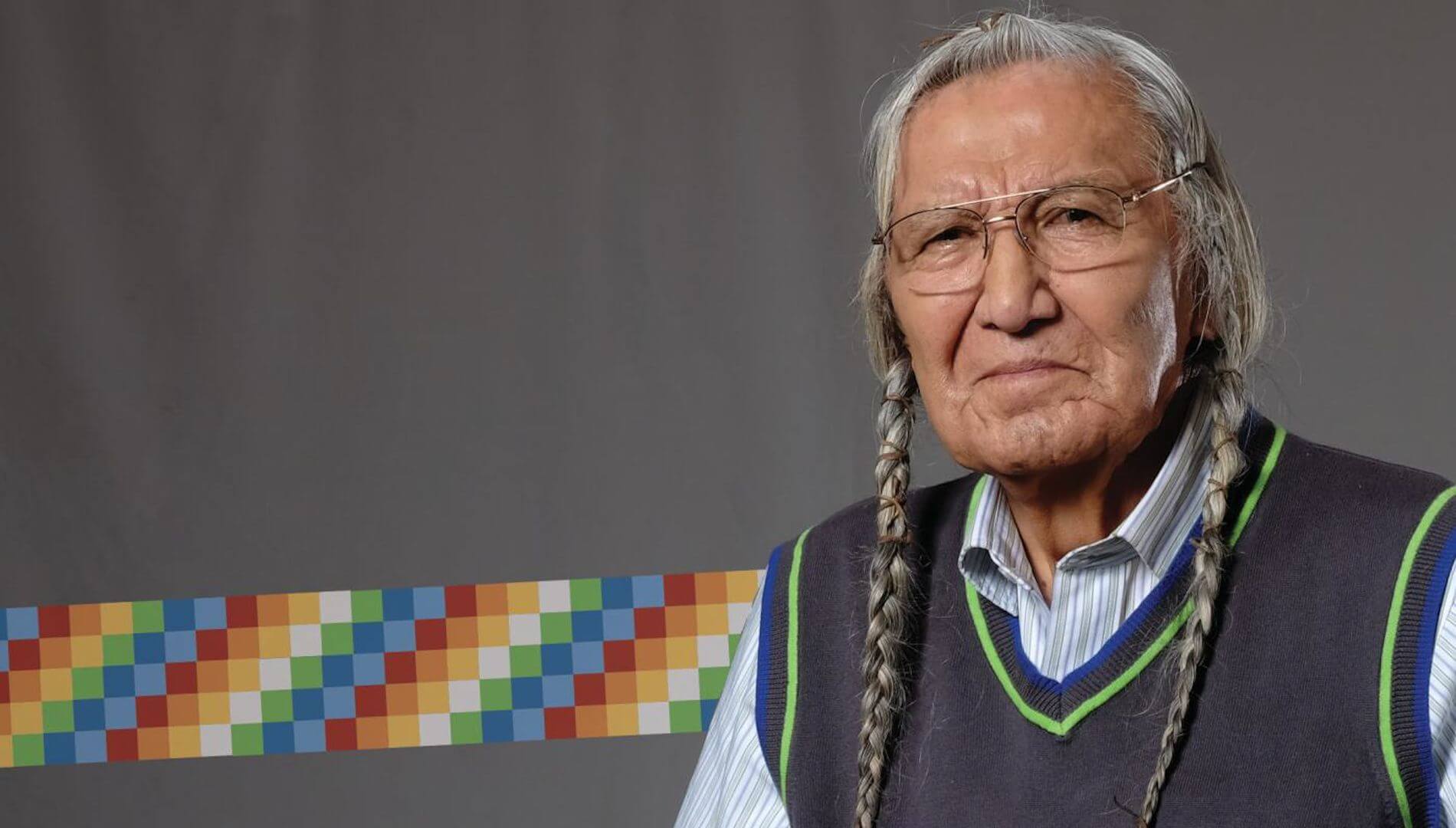 You may not recognize the name Kiaux, the name his mother gave him when he was born in 1935. Kiaux—or as English speakers know him, Russell Jim—has been nominated and will receive an Honorary Doctoral Degree in recognition of his life long contributions as a Traditional Knowledge Scholar, Cultural Guardian, Guide and Mentor, Teacher and Protector of the Living Environment.

On Monday, 5 June 2017 at the Heritage University Campus in Toppenish, Yakama Nation (4 days before the Yakama Nation’s Treaty Day) university president John Bassett will be joined by Tribal government officials, community members, other public officials and University faculty will honor Kiaux for his scholarly, cultural and leadership contributions to the body of human knowledge.

The conferral of a doctoral degree by the University is important recognition by scholars. The ceremony in June, however, is merely a public affirmation of that which has already existed: Kiaux’s deep knowledge of Yakama culture, systems of thinking, scholarship and contributions to human knowledge—a profound world-class thinker and contributor of knowledge comparable to Lao Tzu—the 6th century Daoist philosopher in China, Rabindranath Tagore (1861-1941)—the great Bengali scholar, and the Toltecs of pre-Hispanic (10th century) México. His contributions to knowledge measured in this way explains the insightful influence Kiaux has had on generations of Yakama’s, native peoples across North America and in countries as far reaching as the former Yugoslavia, Ireland, Peru, Taiwan, and Sweden.

Bobbie Jim is Kiaux’s devoted spouse, Longhouse guide, healer and gatherer of plant medicines, preparer of dried salmon, mother and teacher of traditional ways to their children and grandchildren, Kiaux’s ceremonial partner and leader among men and women. Bobbie is a spiritual partner as well as a strong protector of her family. She is respected for her deep knowledge of cultural practices in the Yakama as well as the Wenatchee (her childhood people). She is always bearing gifts for those in need as well as those whom she wishes to honor. She travels with Kiaux to cultural gatherings, assists with burial ceremonies, and gives tender instruction to young ones in Longhouse as well as at home. All will agree that they are deeply enriched merely to be in Bobbie Jim’s presence. 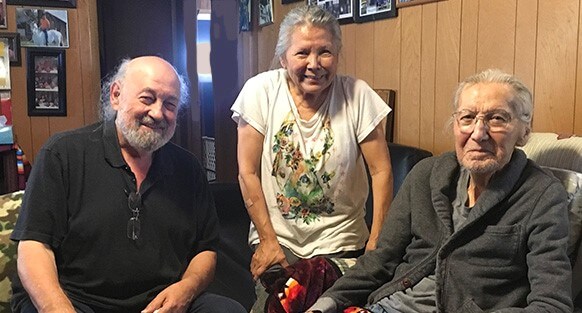 Kiaux has for more than fifty years been a leader in many public and private capacities reflecting on Yakama knowledge and culture—urging and instructing to advance understanding and appreciation of the influence of ancient Yakama knowledge systems on present day events as well as solutions for human problems. He is the Sunday Services ceremonial leader at the White Swan Community Center where he leads the first foods feast in the Washat services (seven drums) where he leads Longhouse attendants offering gratitude to the Creator by naming foods and medicines gathered from the land, and singing traditional songs, telling stories and sharing Yakama knowledge. For more than 37-years Kiaux has served as the Director the Yakama Environmental Restoration and Hazardous Waste Management program. The title of the program seems somehow limiting of the breadth and extent of Kiaux and his professional staff’s reach to prevent further injury to Yakama natural medicines and animals, land, water and people caused by the United States government’s Hanford plutonium reactor and nuclear waste dump facility located on Yakama ceded lands. It was Kiaux who stepped forward as a Yakama Councilman to demand that the United States government recognize the Yakama Indian Nation as an “affected tribe” under the 1982 Nuclear Waste Policy Act. It was this act that the American government enacted to implement “a comprehensive national program for the safe, permanent disposal of highly radioactive wastes.”

Kiaux knew what had been contaminating Yakama people since 1945 immediately and he informed the Yakama Tribal Council that the US government could not contain the plutonium and other nuclear waste buried and held in containers near the Yakama Reservation. Indeed, Kiaux was correct and essentially forced the creation of the Yakama Environmental Restoration and Hazardous Waste Program into existence as an effort to contain the damages and protect the Yakama and other peoples from further damage caused by the American nuclear disaster called Hanford. Kiaux sought out the most talented and committed scientists with whom he would work to blend traditional Yakama sciences (that he would call holistic Environmental Management so it would be more understandable to his colleagues) and conventional sciences to seek out and implement Yakama solutions to the giant threat to life.

While Kiaux is well known for his work combating the adverse threats to life from the risks and affects of nuclear waste he has a long record of organizational and political engagement. He has served as Secretary to the Center for World Indigenous Studies Board of Directors for more than 35-years. He has also served as a Senior Fellow for Holistic Environmental Management and an Associate Scholar at the Center. He is also a former Regional Vice President at the National Congress of American Indians and former President of the Affiliated Tribes of Northwest Indians.

The Columbia River Keepers of Portland, Oregon had also awarded River Person of the Year recognition to Kiaux; he served as a member of the Washington State Commission for the Humanities and also served on the High Level Nuclear Waste Advisory Council. He served as a North American representative to the World Council of Indigenous Peoples and presented as an invited speaker at the United Nations North/South Economic and Environmental Conference as well as an invited speaker at the Center for World Indigenous Studies/University College-Dublin, Ireland Conference, “World Conference on Violence and Human Coexistence.”

I offer my deeply felt thanks to Kiaux for his friendship, collegial engagement, teachings, counsel and scholarship. I also extend the congratulations of the Center for World Indigenous Studies Board of Directors for his continuing commitment to the application of traditional knowledge solving indigenous peoples’ problems through education, research and public policy. We are proud to be in your presence Kiaux!

Dr. Rÿser is the Chairman of the Center for World Indigenous Studies. He served as Senior Advisor to the President George Manuel of the World Council of Indigenous Peoples, Advisor and Speechwriter to Quinault President Joe DeLaCruz, a former Acting Executive Director of the National Congress of American Indians, and a former staff member of the American Indian Policy Review Commission. He holds a doctorate in international relations, teaches Fourth World Geopolitics through the CWIS Certificate Program (www.cwis.org. He is the author of “Indigenous Nations and Modern States” published by Routledge in 2012