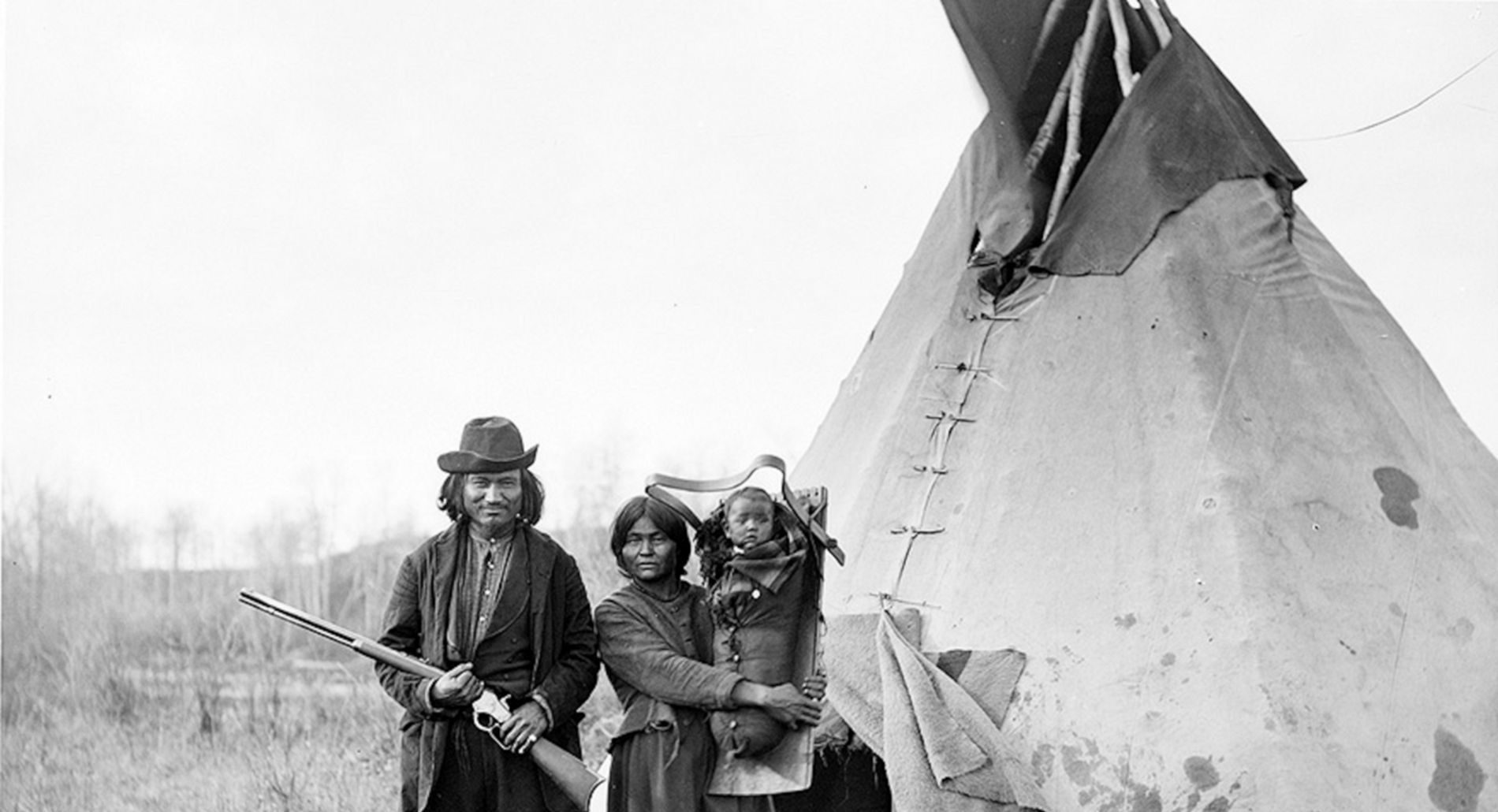 Treaty 4, which covered present-day southern Saskatchewan and a small part of western Manitoba was negotiated and signed at Qu'appelle Lakes. Here Saulteux from Upper Assiniboine River, Oct. 16, 1887 were promised for every ‘man, woman and child $1,200 …blankets and other articles.’ (Library and Archives Canada/Natural Resources Canada fonds/PA-050799).
Support our journalism. Become a Patron!

There is a tired joke, a standard for Indigenous peoples on the Prairies, regarding the five dollar bill. The bill is sometimes referred to as “treaty money,” and a chuckle is shared when it is exchanged. On the Prairies, five dollars is the annual payment “status-Indians” receive in exchange for the Crown taking up lands and accessing resources, among other things.

By all measures, it is quite a deal for Canada in the present day. For Indigenous peoples, it is an old joke, an annual reminder of sharp and unfair historical dealings among the treaty-making that aided the foundation of Canada.

These jokes can provide some comfort, but the recent decision from the Superior Court of Ontario in Restoule v. Canada provides considerably more relief than these small humours.

The Restoule v. Canada decision, delivered by Justice Patricia Hennessey, ruled that the provincial and federal governments are obligated to increase the annuity as outlined in the original Robinson-Huron Treaty signed in 1850.

The Crown left to its unfettered discretion in interpreting the treaty, has paid four dollars per year to treaty signatories for the past 143 years. This is the case despite an augmentation clause in the treaty that agrees to increase the annuity should government revenues increase.

As significant as the ruling itself is, the path the Ontario Superior Court took to get there is equally important. Alongside the consideration of the principles of treaty interpretation (the written judgment is 132 pages long), Anishinaabe law and governance substantively inform the decision. The ruling specifically relies upon Anishinaabe principles of respect, responsibility, reciprocity and renewal to understand the intention of the signatories at the time of signing.

The decision considers the Anishinaabe legal perspective of renewal, and holds that the maintenance of the treaty relationship is an ongoing obligation for all parties, as the written treaty was “not meant as a last word on the relationship” between the Anishinaabe and the Crown. 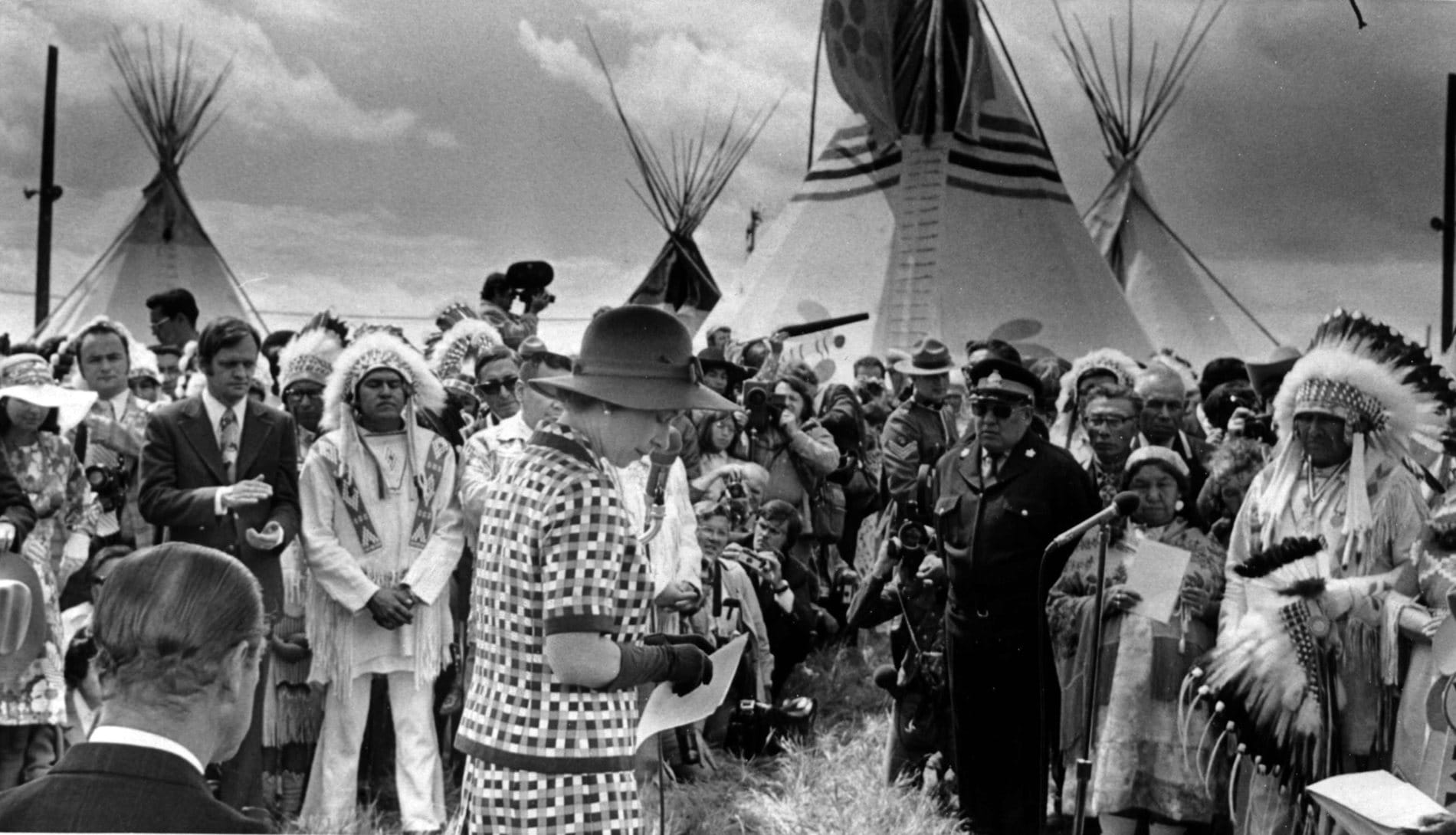 Queen Elizabeth assured Alberta treaty Indians that their treaties would be upheld during a visit to an Indian village in Calgary July 5, 1973. (CP PHOTO)

Such decisions within the judgment is an incremental turn in the long-needed correction within Canadian jurisprudence. It works towards regarding the recognition of Indigenous legal systems and traditions. The Superior Court has taken direction from past Supreme Court of Canada decisions in this regard.

Such direction flows out of Canada’s multi-juridical composition, including the multitude of Indigenous legal systems within Canada. Indigenous nations have always required law to set standards of conduct between their citizens. However, Indigenous legal orders have long been given short shrift in comparison to common and civil laws in Canada, often obscuring their view from the Canadian conscience.

The recent decision is a present-day reconciliation of past nation-to-nation practices. As Anishinaabe legal scholar John Borrows says, it works “to relinquishes those interpretations of law that are discriminatory” within Canada. For those who may be skeptical of the applicability of Indigenous laws in this case, the record around the decision can serve as a guide to interrogate such skepticism. There are no fictive leaps taken by the judiciary.

In considering Anishinaabe legal and governing processes in practical terms, the court relies upon a wealth of expert testimony from elders and community leaders and the historical record and supplements this knowledge with other expert witnesses. This collection of Anishinaabe legal knowledge that was used to remind the Crown of the intent of the original agreement withstood the rigours of litigation during the trial.

Anishinaabe peoples have relied upon their law in all of their historical treaty relations with the Crown. This correction by the court also raises the question consistently sung full-throated by generations of Indigenous peoples: How much have past decisions involving Indigenous lands, rights and governance considered Indigenous laws? And how can past treaty rulings be considered just and fair if they did not take into account these multi-layered laws?

A pathway to reconciliation

This recent decision can also create a pathway to significant corrections in the “reconciliation era” within Canada. Despite positive rhetoric, the haziness of interpreting what reconciliation is, as well as what some believe is a dearth of concrete reconciliatory actions to follow up such rhetoric has some Indigenous people concerned about reconciliation as a general national project.

The Restoule v. Canada decision can be nourishment to the national reconciliation endeavour. The court, in a forward-thinking way, has moved to provide full digital record of the trial, to be preserved for “the benefit of scholars, Treaty First Nations, and other interested persons.”

In keeping with the TRC’s 26th and 27th calls to action which require law societies and law schools to educate on Indigenous legal orders, the beneficiaries of this preservation of the trial notes undoubtedly include law faculties and students. 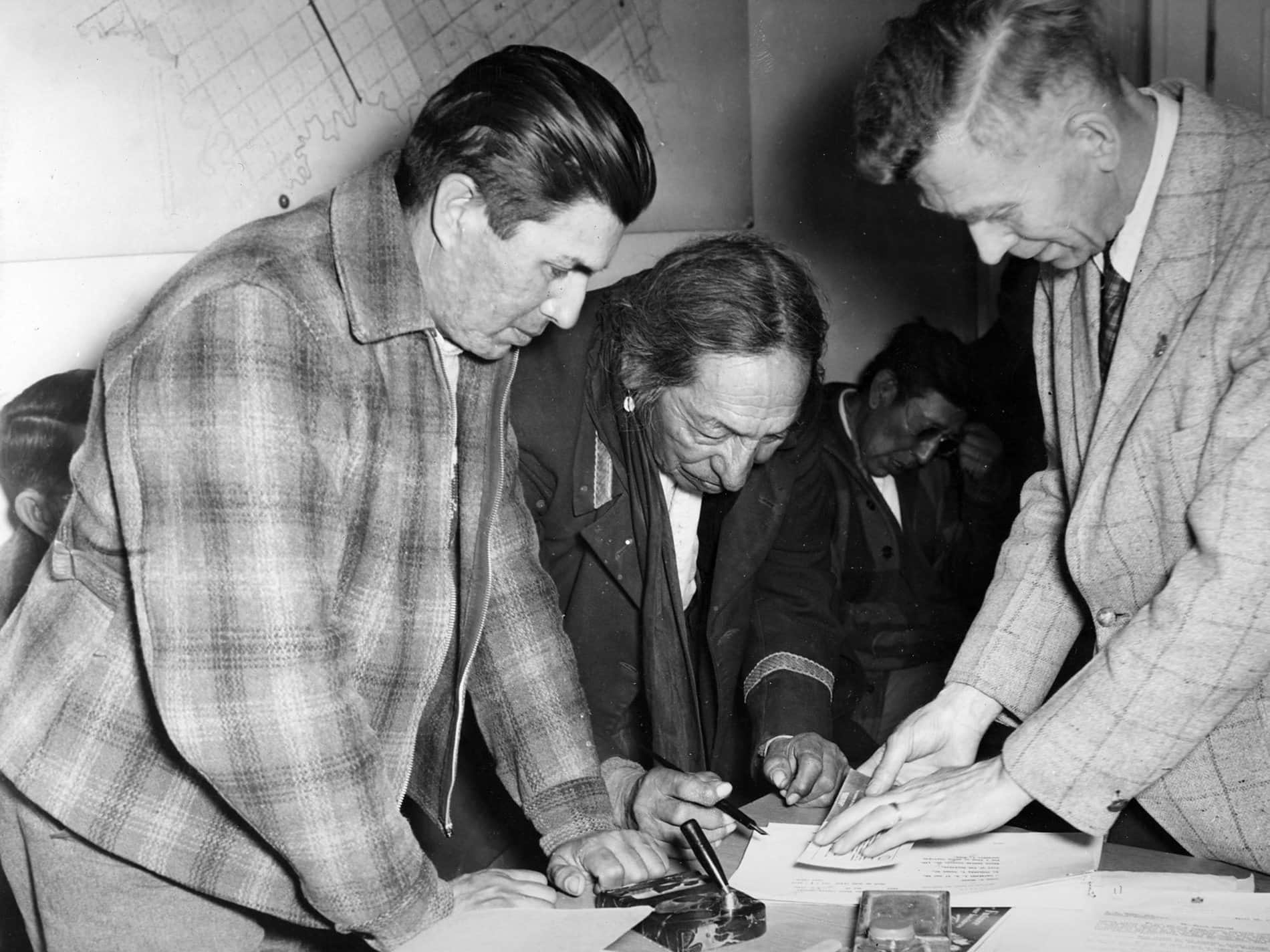 Blood Reservation Head Chief Shot-On-Both-Sides (centre), places his “X” on leases deals while Minor Chief Albert Many Fingers (left) and Harold Moore, assistant superintendant of the reservation, look on on May 5, 1949 in Lethbridge, Alta. The deal leases a vast block of fertile lands being taken over for a 10-year-period by lage-scale mechanized grain farmers for development, where the Blood tribe will receive 40 cents an acre annually as a cash bonus and a portion of the crop production, embracing some 23,000 acres. (CP PHOTO – files)

Whether the Crown rests upon the court’s decision or seeks an appeal remains to be seen. Despite its reconciliatory approach towards Indigenous peoples, the current federal government, much like its Conservative predecessor, continues to use litigation as a favoured conflict management tool.

While the decision may recast material wealth in the treaty territory (and set some five-dollar jokes aside), it also leaves clues to a broader understanding of wealth in Canada.

The decision’s final 11 paragraphs are dedicated to thankfulness. Remarkably, the trial decision includes a thankfulness towards the First Nations, who at times hosted the trial, towards Crown counsel for the dedication to the records and towards community members who held feasts and ceremonies to ensure the work of the court. The work, however adversarial, was centered on bimaadiziwin — working towards leading a good life.

There is a wealth here, in this thankfulness and in good and just relations. The decision suggests that Indigenous legal traditions can point us in the right direction, towards this wealth of gratitude, justice and a good life.