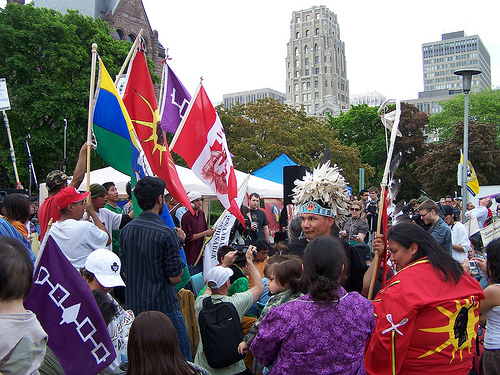 Highlighting the Struggles of Indigenous People

Algonquins of Barriere lake – Located about 400 km north of Montreal, Quebec, the Algonquin community is struggling to regain control after the government unjustly deposed their traditional government and placed them under third party management.

Mi’kmaq and Maliseet – These two Indigenous Nations, along with so many others in Canada, are poised to resist the encroachment and destruction of their land by the Uranium industry.

Ihanktunwan – In South Dakota, the Ihanktunwan People (Yankton Sioux) are resisting an industrial hog farm being constructed right beside them. The resistance culminated a couple months ago, with state troopers encroaching on their land to defend the farm.

Shoshone – For years the US government has systematically abrogated the Shoshone’s land rights. Continuing to do so, the government is preparing to increase it’s nuclear weapons development efforts on Shoshone lands. Meanwhile, the sacred Yucca Mountain continues to be eyed for a major nuclear waste repository.

Takla Lake – Located in central British Colombia, the People of Takla Lake currently have two blockades erected to block access to their lands – which the government is illegally selling to mining and forestry companies.

Dineh – The Dineh People of Black Mesa, in the US state of Arizona, are working to resis the efforts of the US Government– acting in the interests of the Peabody Coal Company—to relocate the Dineh and destroy their homelands. This land is the basis for the Black Mesa peoples’ traditions, livelihoods, and spirituality.

Haudenosaunee – More commonly known as the Six Nations, the Haudenosaunee are heading over a dozen land reclamation efforts.

Lubicon – Also in Alberta, the Lubicon Cree have for years been struggling for the rights as a sovereign people. Currently, the Alberta Utilities Commission is going out of it’s way to deny the Lubicon their rights, in a politically lame attempt to claim jurisdiction.

Innu – More than a hundred Innu families in the Province of Newfoundland Labrador are currently facing eviction from homes built on their lands.

Taino – In Puerto Rico, the Taino People were recently told they are ‘not allowed’ to clean the Bucana river in Jacanas. The taino want to clean the river and “mend the damage caused to the sacred site of Jacanas… and to renew its integrity.”

Zapatista – Respected around the world, the Mayan People known as the Zapatista are under an increasing amount of militant pressure from paramilitaries and the Mexican government. The pressure began last year, around the time of the Intercontinental Encuentro.

Cucapa – supported by the Zapatista, the Cucapa recently had 9 tons of gulf corvina taken from them by armed Mexican marines and the federal police. A fishing community, the Cucapa depend on the Corvina for subsistence.

O’odham – Living on either side of the US/Mexico Border, the southern O’odham are struggling to protect one of their most sacred Ceremonial sites, near which the government wants to build a toxic waste dump.

Keqchi – More than 100 Maya Keqchi families from the Alta Verapaz region of Guatemala — along with members belonging to the National Committee of CUC (the Campesino Unity Committee) — have faced multiple attacks and kidnappings by paramilitaries associated with the bio fuel agribusiness, Ingenio Guadelupe. The Inter American Development Bank promotes the bio fuel industry in Guatemala.

San Miguel Ixtahuacán – also in Guatemala, this Mayan community was recently attacked for opposing a mine headed by Montana Exploradora de Guatemala, a subsidiary of Canada’s Goldcorp. The Police shot tear gas at local children and used force against women.

Ngobe – In Panama, the Ngobe are currently facing displacement at the hands of the Chan 75, a hydro project headed by the US company Allied Energy Systems (AES). More than 1000 Ngobe will be effected.

Terraba and Chinakicha – In Costa Rica, the Terraba and Chinakicha are also facing displacement at the hands of another hyro project, known as El Diquis. Not only will the dam flood their lands, but it will destroy over 200 historical sites; including Burial Grounds, Sacred Sites, and Ancient Ruins.

People of Tilcara – The Indigenous Municipality of Tilcara, in northern Argentina, are attempting to prohibit open-pit metal mining, as well as the storage, use, sale, production, extraction and transportation of dangerous substances used in the mining process.

Kofan In Columbia, the Kofan are concerned about a new base the Colombian army is building at a site called “Finca Maravales,” which they consider to be sacred ground. The Kofan say the presence of the army is destroying the environment and disturbing their region’s peace to such an extent that they can’t practice their traditions.

Nasa – Also in Colombia, the Nasa were recently attacked by the ESMAD, the Colombian version of a ‘SWAT’ team. Leading up to the attack, nearly 500 Nasa had claimed their right to land promised by the government for the its role in the 1991 massacre of El Nilo.

Bari – The indigenous People of Venezuela, especially the Bari, continue to find themselves surrounded by the prospect of their own demise. That is, despite the demarcation of their territories and the Decree issued last year (see comment) by President Hugo Chavez that prohibited new coal mines from being built in the Sierra de Perija.

Yakye Axa – One of 17 indigenous Peoples in Paraguay, the Yakye Axa are struggling to return to their ancestral territories. In 2005, the IACHR ruled unanimously that the Paraguayan State must allow them to return, but they have so far refused to do so.

Ogiek – Located in Kenya, the Ogiek have faced numerous attacks by militias and the state police. One article in February explains that the Ogiek are being hunted down like rabbits.

Hadzabe – The Hadzabe, indigenous people of northern Tanzania, are effectively getting boxed in by Royals from the United Arab Emirates, who are purchasing Hadzabe lands for a fishing and sport hunting enterprise.

Kgeikani Kweni – in the Central Kalahari Game Reserve of Botswana, the Kgeikani Kweni, more commonly known as the bushmen, were evicted from their lands a few years ago. They won a case in court affirming the eviction was illegal, and were told they could return home. The government, however, refuses to comply. The busmen are denied water, are arrested for hunting for food, and a great number are stranded far away from their lands, unable to get back.

Dongria Kondh – In the Indian State of Orrissa, the Kondh are currently facing the destruction of their land, their sacred sites, their culture and their livelihood… for the aluminum industry.

Penan – Living on the island of Borneo, the Penan are under an immense amount of pressure by the logging industry. For the past twenty years, the Penan have been setting up blockades to defend the rainforest and their way of life. Now, with the forest almost gone, several other industries are emerging, even further threatening the Penan.

Karen – Living in Burma, the Karen — along with the Karenni, Mon, Shan, Wa, Pa-O, Lahu, Padaung, Akha, Lisu, Kachin, Kukis and Palaung — are facing displacement at the hands of Burma’s military.

Papuans – The People of West Papua struggle for rights and independence, a prospect the Indonesian government views as “treason.” Papuans are frequently arrested, assaulted, and humiliated for exercising their rights.

Jumma – Living in the Chittagong Hill Tracts (CHTs) of Bangladesh, earlier this year the Jumma were attacked by hundreds of illegal settlers. Over 500 houses are reported to have been burned, and an unknown number of Jumma were assaulted, raped, and looted during the attack. Unofficially, the government is thoroughly pleased with how things turned out.

Subanon – Located in the Southern Philippines, the Subanon People recently tried and found guilty the Canadian mining company TVI Pacific, for a number of human rights abuses and violations of Subanon customary law.

Bugkalot – The Bugkalot, along with the Kankaney, Ifugao, and Kalanguya tribes in northern Philippines have been recently setting up blockades to protect their lands against foreign mining interests.

Ethnic Fijians – A worrisome proposal was recently tabled in Fiji that seeks the de-reservation of all Indigenous lands on the Pacific Island — allegedly, to ensure the survival of the Sugar Cane Industry on which thousands of people depend. This request was prompted in a report authored last November which stated the land could be ‘better utilised’ if the military-backed interim government de-reserved native land and increased the size of sugar cane lots from 4 hectares to 40 and 400.