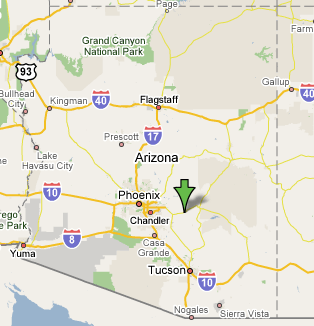 Here’s an urgent online petition to help protect Apache Leap and numerous other Sacred sites from desecration by copper mining. The land in question is part of the ancestral lands of the sovereign Native Nations of the Apache, Yavapai, Hopi, and O’Odham.

These Nations have not given permission for this land to be mined—and yet, there’s a bill in US congress about to pass which would grant the Canadian mining Company Resolution Copper, unmitigated access to the land.

In other words, the bill will make them exempt from all NEPA mandated processes, making it legal for them to destroy and violate the land, including areas referred to by non-Indians as Oak Flat, Apache Leap and Devils Canyon. Aswell, one of the few perennial streams in Arizona will likely be emptied of all water—not to mention the ability of the People to practice Ceremony will be seriously impacted.

This bill will be passed unless 20,000 signatures are collected in 30 days.

Please take a moment to sign your name on this Petition, and pass it on to others. So far over 1900 signatures have been collected.

Here’s the resolution attached to the petition

Whereas, the Tribal Coalition of six Arizona tribes has stated that the proposed mining operation of Resolution Copper is within the ancestral lands of the sovereign native nations of the Apache, Yavapai, Hopi, and O’Odham Indian Communities.

Whereas, Apache Leap area has been and continues to be of great cultural, subsistence and spiritual significance to numerous federally recognized native American Tribes throughout the region.

Whereas, the proposed site is on United States and Arizona State Public Lands, including Oak Flat, Apache Leap and Devils Canyon, and should be preserved for tribal ceremony and culture, recreation, habitat and watershed.

Whereas, the proposed land exchange will be turning public land into private domain, which will avoid the environmental impact evaluations and oversight regulations required on public lands.

Whereas, there must be a hydrological study that would assure that the public water supply of Superior, Arizona, the waters of Queen Creek, and the waters of National Forest will not be depleted or polluted by the mining operations.

Whereas, the mining waste is calculated to be equivalent to a 20-story building spread over 2,389 acres of land, which will despoil the scenic landscape.

Whereas, we are in agreement with the following Tribal Coalition letter.

NOW, THEREFORE, we, the undersigned, do hereby

1) Request the President to comply with all requests made in the Tribal Coalition letter of June 20, 2007.

2) Request the President to continue the protection provided to Oak Flat by President Eisenhower in 1955 as an important recreational resource.

3) Request the President to protect Oak Flat, Apache Leap and Devils Canyon from any and all destruction by mining, industry, housing development or any other endeavor that would destroy this region, its beauty, its recreational value, and its traditional Native American heritage.