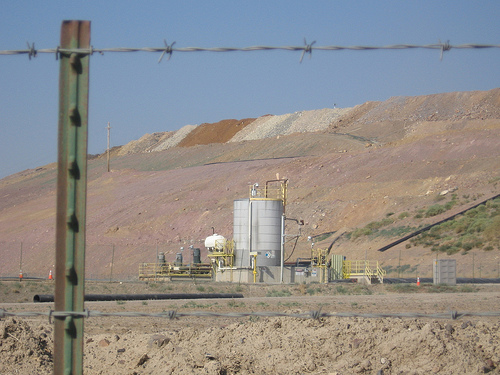 In two days (June 10) the Ninth Circuit Court of Appeals will hear oral arguments on whether the Canadian mining company Barrick Gold will be allowed to move ahead with its open pit gold mine on the Shoshone Sacred Site of Mount Tenabo in Nevada.

The mine threatens to permanently destroy the cultural and spiritual
practices of the Western Shoshone People.

To ensure this does not happen, supporters are being urged to send the following letter to U.S. President Barrack Obama requesting a formal intervention on behalf of the Shoshone – in accordance with the American Indian Religious Freedom Act, which requires the U.S. government to “protect and preserve” the traditional religious practices of indigenous peoples, including but not limited to “access to sites, use and possession of sacred objects, and the freedom to worship through ceremonials and traditional rites.”

You can send the letter to: comments@whitehouse.gov

For those in the San Fransisco Area, there will also be a gathering outside of the James R. Browning Courthouse (map) on 95 7th Street. A peaceful and respectful ceremony will open the gathering at 7:30AM. Western Shoshone elders will speak at 8:00 AM

I am writing about a grave and important issue that strikes to the core of the founding of this country – religious freedom. The American Indian Religious Freedom Act requires the U.S. government to “protect and preserve” the traditional religious practice of our indigenous peoples including but not limited to “to access to sites, use and possession of sacred objects, and the freedom to worship through ceremonials and traditional rites.” (Pub. L. 95–341, § 1, Aug. 11, 1978, 92 Stat. 469.)

The U.S. Bureau of Land Management approved the construction of a massive open pit cyanide heap leach gold mine on the face of well-known spiritual area, Mt. Tenabo. The permanent impacts of the project to the cultural and spiritual practices of the Western Shoshone are undeniable. Mt. Tenabo has been, and continues to be, used by Western Shoshone people as a central part of their religious practices and world view. Western Shoshone visit the mountain and the valley below (the location of the mine pit) for prayer ceremonies, gathering of sacred plants, fasting, and vision quests, among other uses. The Mountain also contains Western
Shoshone gravesites. All of these values and uses will be destroyed by the Project. In addition, the massive pumping of groundwater will dry up sacred springs and streams on and around Mt. Tenabo. “Shoshone Wells,” is one of the springs that has spiritual and cultural significance, which according even to the analysts contracted by Barrick Gold Corporation, will be permanently impacted.

Excavation of the pit could cause rock slides within the sacred White Cliffs at the base of Mt. Tenabo. These cliffs are mostly quartz deposits that have special significance to the Shoshone. According to the analysis in the draft Environmental Impact Statement (DEIS) there will be no impact to the cliffs even though the final rim of the pit would be only a hundred feet from the cliffs. There would also be large waste rock piles and a tailing facilities that would also be a permanent feature to be eventually “reclaimed” along with the waste rock piles and heap leach pile. All of these will permanently change the contours of the landscape, and potentially be sources of water contamination.

According to Western Shoshone Grandmother Joyce McDade, “Denabo (correct pronunciation) has significance for Western Shoshone; it means the writing on the rock walls of the mountain (White Cliffs) put there by our Creator. We go to pray to our Creator to give us strength to keep us going. How can we pray to our creator when the place is being blown up?”

I see this location as an example of where mining should not exist. In my view there is no mitigation to the impacts this mine will incur on the Western Shoshone culture. Please look into this issue and intervene of behalf of the Western Shoshone and the American people to protect religious freedom.