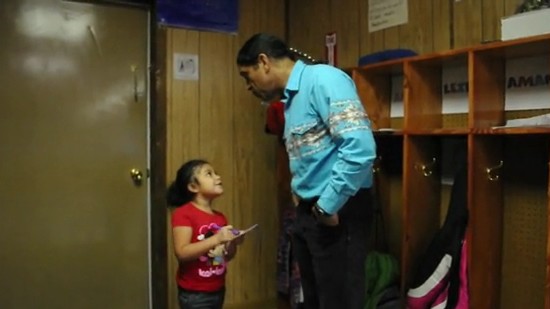 Lost Words tells the story of Amber, Conrad, Yellow Otter, and S. Neyooxet Greymorning among other Native American who are working to save endangered languages. Through them we learn of how language is used to perform ceremonies and to express cultural identity. We also learn of the government push to eradicate American Indian languages and how the traumas experienced affect Indigenous peoples today.

Brian McDermott, filmmaker and social worker, races against the clock to fund his film on dying languages. In the press release below, McDermott talks about the importance of saving languages and explains why he appreciates alternative funding sources.

Philadelphia, PA August 2, 2011 — Independent filmmaker Brian McDermott is using the Internet to raise funds for Lost Words, a documentary about American Indians who are trying to save their endangered languages. McDermott became interested in the idea of saving dying languages after taking an immersion course at the University of Montana and learning to speak some of the Native American language Arapaho.

McDermott says he decided to make a film on the subject after the professor had challenged the class to imagine what it would be like if they were the last people to speak a certain language. It was then that he says he felt how important language is for people – not only for communication, but as something that provides a sense of identity, meaning, and relationship with community and as something that helps to pass on traditions and even spirituality to younger generations.

McDermott feels that internet sites like Kickstarter.com that allow independent artists to quickly raise funding for projects are a welcomed alternative to grants which can sometimes take up to two years to receive. He also believes that “alternative Internet-based funding methods like Kickstarter help to increase exposure for projects while raising the excitement of everyone involved.” And with rewards to backers such as free tickets to screenings and even a free language lesson, McDermott says Kickstarter enables “people who pledge to become more involved with and connected to the project.”

The 60-minute documentary tells the story of Anthropology and Native American Studies professor S. Neyooxet Greymorning and others who are engaged in saving endangered languages. Through them we learn how language is used to perform ceremonies and to express cultural identity. We also learn of the government push to eradicate American Indian languages and how the traumas experienced affect Indigenous peoples today. McDermott hopes that making a film on the subject will ultimately raise awareness about the importance of languages, the problem of language loss, and perhaps even spark an interest in keeping Native American languages alive.

McDermott and his crew have to raise $10,000 by August 10th in order to complete the filming of Lost Words. If the funds are not raised, all the pledges will be canceled and the project will receive no funding through Kickstarter.

To learn more about the documentary, visit the film’s Kickstarter page:

Brian McDermott is a social worker and filmmaker who has worked with adjudicated youth, families in poverty, and institutionalized senior citizens. Through his films, Brian hopes to engender empathy and pursue social justice. Brian has written three feature scripts, and has also written and directed three short films including an award-winning film on the treatment and care of seniors in assisted living entitled ‘Cigarettes and Fresh Air,’ which aired on public TV and is now being distributed through Parallel Lines.