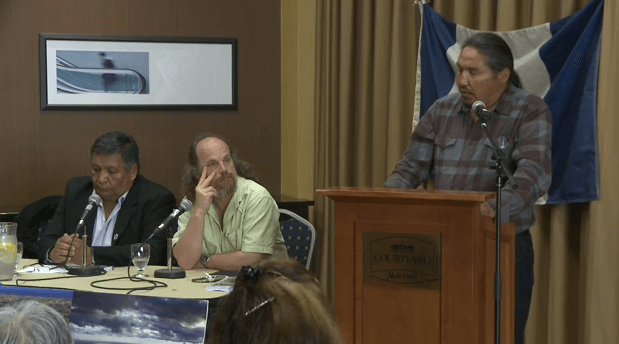 July 7, 2014, Edmonton, AB – Today the Athabasca Chipewyan First Nation (ACFN) and the Mikisew Cree First Nation (MCFN), in collaboration with researchers from the University of Manitoba, released a report Environmental and Human Health Implications of Athabasca Oil Sands, and is the first report of its kind to draw an associations between oil sands produced environmental contaminants and declines in community health and well-being in Fort Chipewyan, Alberta. This report has been peer reviewed by Health Canada and other health and environmental agencies.

Integrating scientific research methods and local knowledge, the report is the result of three years of community-based participatory research that incorporates both the traditional knowledge of community members and scientific monitoring techniques.

MCFN Chief Steve Courtoreille says, “This report confirms what we have always suspected. about the association between environmental contaminants from oil sands production upstream and cancer and other serious illness in our community. The Joint Oil Sands Monitoring Programme has released data about the increases in these contaminants, but fails to address and monitor impacts to First Nations traditional foods. We are greatly alarmed and demand further research and studies are done to expand on the findings of this report.”

Findings include generally high concentrations of carcinogenic PAHs (polycyclic aromatic hydrocarbons), and heavy metals arsenic, mercury, cadmium, and selenium in kidney and liver samples from moose, ducks, muskrats, and beavers harvested by community members. Bitumen extraction and upgrading is a major emitter of all of these contaminants.

Contaminants in wildlife, as well as limited access due to declining water levels, have nearly eliminated the consumption of some traditional foods; fish caught in Lake Athabasca and the Athabasca River are no longer trusted, while muskrat populations have declined precipitously.

ACFN Chief Allan Adam notes that “It’s frustrating to be constantly filling the gaps in research and studies that should have already been done. This demonstrates the lack of respect by industry and government to effecting address the First Nations concerns about impacts our Treaty rights and the increases in rare illnesses in our community. We need further independent studies done by internationally credible institutions like the World Health Organization.”

Community health and wellbeing have been in sharp decline. The study reveals a link between the Oil Sands and illness in Fort Chipewyan unlike the 2014 cancer report by Alberta Health Service which simply aggregated limited data.. Indeed, cancer occurrence in Fort Chipewyan is positively associated with the consumption of traditional wild foods, including locally caught fish.

“Communities are facing a double-bind”, says Stephane McLachlan, head researcher for the study. “On one hand, industry, notably the Oil Sands, causes a substantial decline in the health of the environment and ultimately of community members. On the other hand, the existing healthcare services are unable to address these declines in human health. These Indigenous communities are caught in the middle, and the impacts are clear and worrisome.”

Researchers and the community leaders urge further investigation of contaminant concentrations, in addition to the mitigation of existing occurrences. The report also emphasizes continued community-based monitoring and calls for improved risk communication from government and industry. A full copy of the report will be available online at www.onerivernews.ca