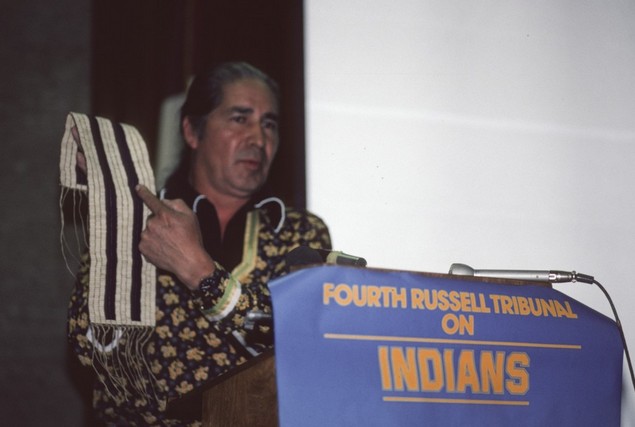 Oren Lyons explains the Two Row agreement at the Russell Tribunal at the Hague in 1980.
Support our journalism. Become a Patron!

Oren Lyons explains the Two Row agreement at the Russell Tribunal at the Hague in 1980.

On Friday, September 13, 2013, Haudenosaunee leaders will participate in a ceremony to honor the 400 year old Two Row Wampum Treaty between the Haudenosaunee Confederacy and The Netherlands. The ceremony will be held at the Tree of Peace which was planted by the late Mohawk elder Jake Swamp at Wijkpark Transvaal in The Hague, The Netherlands, in September 2006.

The Netherlands Coalition for Indigenous Peoples has organized the event as part of their annual efforts to strengthen the implementation of the United Nations Declaration on the Rights of Indigenous Peoples. The Dutch Ambassador for Human Rights, Mr. Lionel Veer will represent The Netherlands Ministry of Foreign Affairs at the ceremony which follows up on the welcome of the Two Row Symbolic Enactment to New York City by the Dutch Consul General Rob deVos on August 9. In New York City, Mr. deVos renewed the 400 year old friendship between his nation and the Haudenosaunee, noting “The Dutch people could not have survived, could not have lived here, without your help. We can learn so much from you.”

Onondaga Faithkeeper and international indigenous leader Oren Lyons, Mohawk educator and activist Kenneth Deer and Mohawk Elder Joe Deom, Chairman of the Board of the KANIEN’KEHÁ:KA ONKWAWÉN:NA RAOTITIÓHKWA Cultural Center, will travel to the Netherlands on Haudenosaunee passports, part of an ongoing assertion of sovereignty. “The Two Row prevails,” Lyons said at the United Nations on August 9. “We’re here. We’re friends. We must now put our attention to the future of our children and their children and their children. If we do that, we ensure the safety of our future.”

Leo van der Vlist, director of The Netherlands Centre for Indigenous Peoples, came to the US to participate in the Two Row Wampum journey down the Hudson River in August. A key organizer of the ceremony at the Hague, he said: “I am very happy that a renewal of the 400 year peace and friendship symbolized by the Two Row Wampum agreement can also take place in our country. This is a significant step in building new relations between States and indigenous peoples based on a joint responsibility for peaceful coexistence and protecting the earth for our future generations.”

Alifuru people (from what is now called Indonesia) residing in The Netherlands will lead the ceremony at the Tree of Peace.

The Two Row Wampum Renewal Campaign is a joint project between native and non-native peoples to raise awareness of the first treaty between the Haudenosaunee and European settlers, created 400 years ago this year. It explains how to coexist together in peace and friendship, and the shared responsibility to take care of the environment. The project was officially endorsed by the Haudenosaunee Grand Council of Chiefs in January, 2013 and involves people from all six Haudenosaunee (Iroquois) nations. The Haudenosaunee are also known as the Iroquois Confederacy. The campaign is co-sponsored by over 85 organizations statewide.