On Christmas Eve in 1830, the population of Hall County, Georgia doubled in size – a large crowd had turned out to witness the illegal hanging of Cherokee, George Corn Tassel.  Just a few generations later, an annual festival which bore Corn Tassel’s name became the biggest festival in Hall County – and it remains so, today.

A few years prior to this grotesque public violation of Indigenous Rights – in 1827 – the state of Georgia had already begun a systematic assault on the Cherokee Republic and Cherokee Constitution. Georgia fought rabidly against, and willfully refused to uphold, the federal treaties the Cherokee had signed with the United States government. The so-called “Empire State of the South” also began to demand their forced removal – an act of ethnic cleansing that would now be in direct violation of international law.

After being warned by President Adams against violating the treaties, Georgia flaunted its (still) deep currents of militia culture and used them to illegally occupy Creek territories, daring the federal government to respond.

Their ultimatum ultimately worked; the U.S. government did not respond to the illegal armed occupations.

In 1828, Georgia officially passed a resolution demanding the governor petition the president to uphold their aims for the forced removal of all Native Americans from the state’s colonial borders. This same year, Georgia passed a series of laws which explicitly took away the rights of Cherokees to testify against white settlers in a court of law. Despite having their own government and constitution, the Cherokee Nation was increasingly subjected to Georgia’s legislation that expanded the legal jurisdictions of adjoining counties to include Cherokee lands. An 1829 Georgia law actually declared any action made by the Cherokee government to be invalid.  This gave settlers and militias free reign to invade, terrorize, and pillage Cherokee homes and villages; and, the Cherokee were given until 1830 to leave their rightful land – as per Georgia ‘state law’. 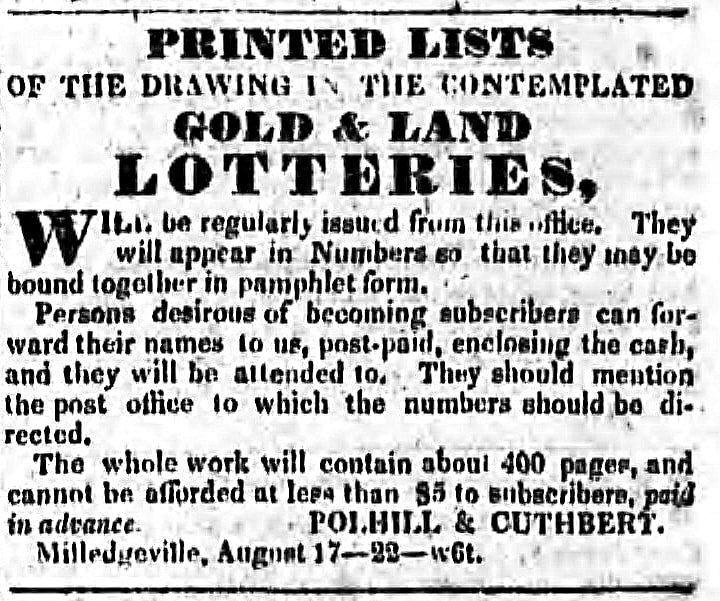 Auction advertisement for Cherokee land; 1832. Athens Historic Newspapers Archive, Digital Library of Georgia. (Between 1832 and 1833, Georgia held the final auctions which would systematically dismantle the Cherokee Nation in the form of a state-sponsored land grab).

The year 1828 also brought the election of President Andrew Jackson – who came to be known as “Chickensnake” by the Cherokee, a metaphor for the sinister tactics he deployed to try to charm them the way a snake charms a chicken. Some Cherokee had fought alongside Jackson against the Creeks during the battle of Horseshoe Bend in 1814, and would live to regret it. As president, Jackson proved notoriously instrumental in the attempts to ethnically cleanse Native Americans from the southeastern United States – and in facilitating the withdrawal of all federal troops from Georgia under his national tenure.

Jackson was on a mission of his own to consolidate the powers of his presidency; and, in step with this, he broke with two Supreme Court decisions that declared Georgia had no authority on or over Native Territories. He did this by turning a blind eye as Georgia’s militias placed over 9 million acres of Cherokee land under violent siege.

As Walter R. Echo-Hawk documented in his text, In the Courts of the Conqueror: The 10 Worst Indian Law Cases Ever Decided,

It was in this political landscape that George Corn Tassel was accused of murdering another Cherokee man on Cherokee territory at Talking Rock, now part of Pickens County, Georgia. Years earlier, George Corn Tassel’s father, Old Tassel (also known as Onitossitah as well as Corn Tassel), a Cherokee Peace Chief from Chota in the Overhills, was murdered by militia members while holding a flag of truce in 1788 near Chilhowee, North Carolina.

The case of George Corn Tassel should have fallen under Cherokee legal jurisdiction, however, since Georgia was willfully disavowing federal treaties, not to mention Cherokee legal and human rights, George Corn Tassel was ‘tried and convicted’ in a kangaroo court by a jury of all white men – at a time when Cherokees themselves were not allowed to testify in Georgia courts against whites.

Cherokee Chief, John Ross, hired the Georgia law firm, Underwood and Harris, as well as former attorney general, William Wirt who was one of the country’s most lauded authorities on ‘Indian Law’ at the time.  Encouraging the Cherokee to take up their case in the Supreme Court, Wirt argued that the Cherokee Nation was “a foreign nation in the sense of our constitution and law”, which meant it wasn’t subject to Georgia’s jurisdiction.

The Cherokee went on to win a ‘stay of execution’. However, the city of Gainesville, Georgia promptly ignored it with Georgia’s Governor Gilmer urging the hasty execution of Corn Tassel in defiance of the federal court. 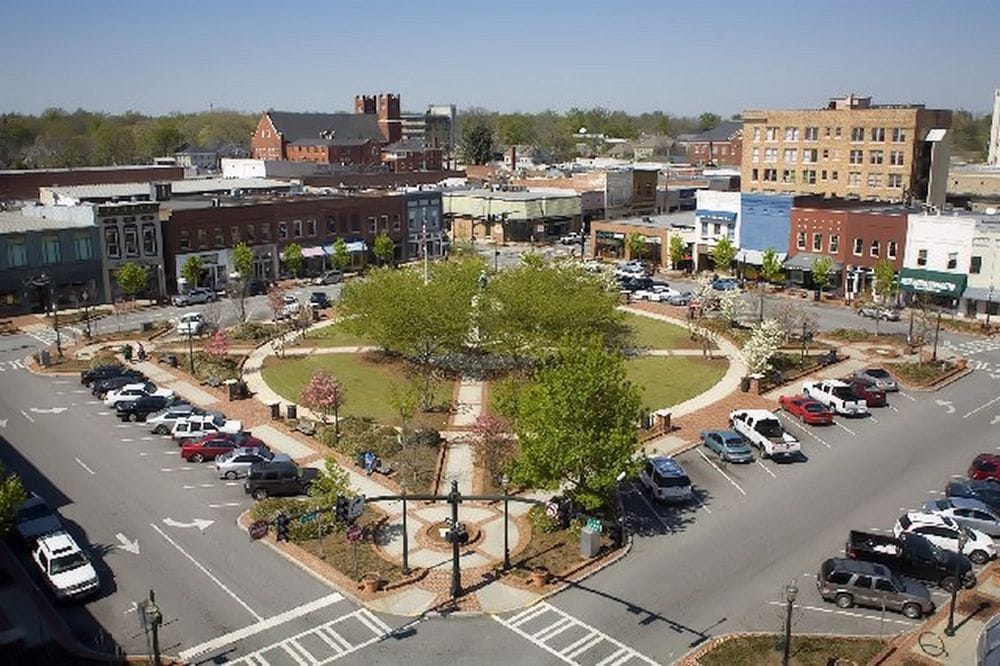 Eagle’s eye view of the town square in Gainesville, Georgia, where a Cherokee man was illegally executed on December 24, 1830 – and thousands still gather every year for a celebration which for many years bore his name. (Wikimedia Commons)

December 24, 1830, was a dark, cloudy day by all accounts. Corn Tassel was publicly hanged from a tree branch in front of a huge crowd of onlookers at the public square. It is said that several Cherokees silently witnessed his hanging.

There is little doubt that the descendants of some of these Georgians, overcome by bloodlust, morbid curiosity, arrogant white supremacy – or whatever drives people to make long journeys to witness a public hanging – are some of the same people who unknowingly gather on the same square each year to listen to bluegrass music and ‘celebrate’ their violent, genocidal, settler heritage – under a festival that  explicitly bore Corn Tassel’s name. 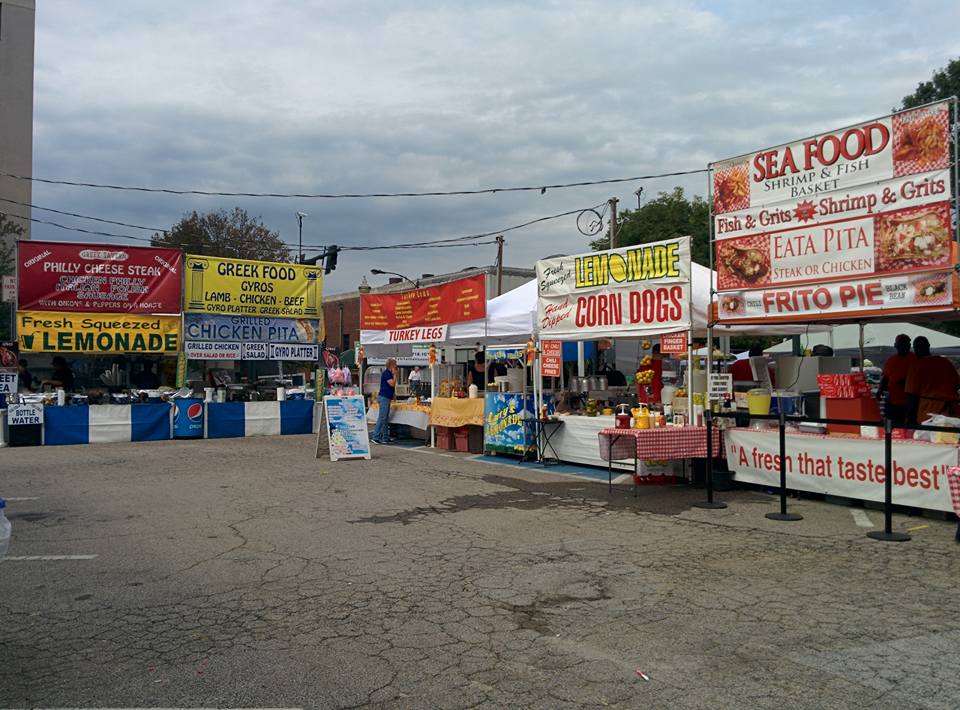 Unfortunately, there are few in Georgia who  know anything about Corn Tassel, let alone the reason why his name was used for Gainesville’s now-largest annual gathering.

According to the Gainesville Times, Corn Tassel was nothing more than a convicted murder. 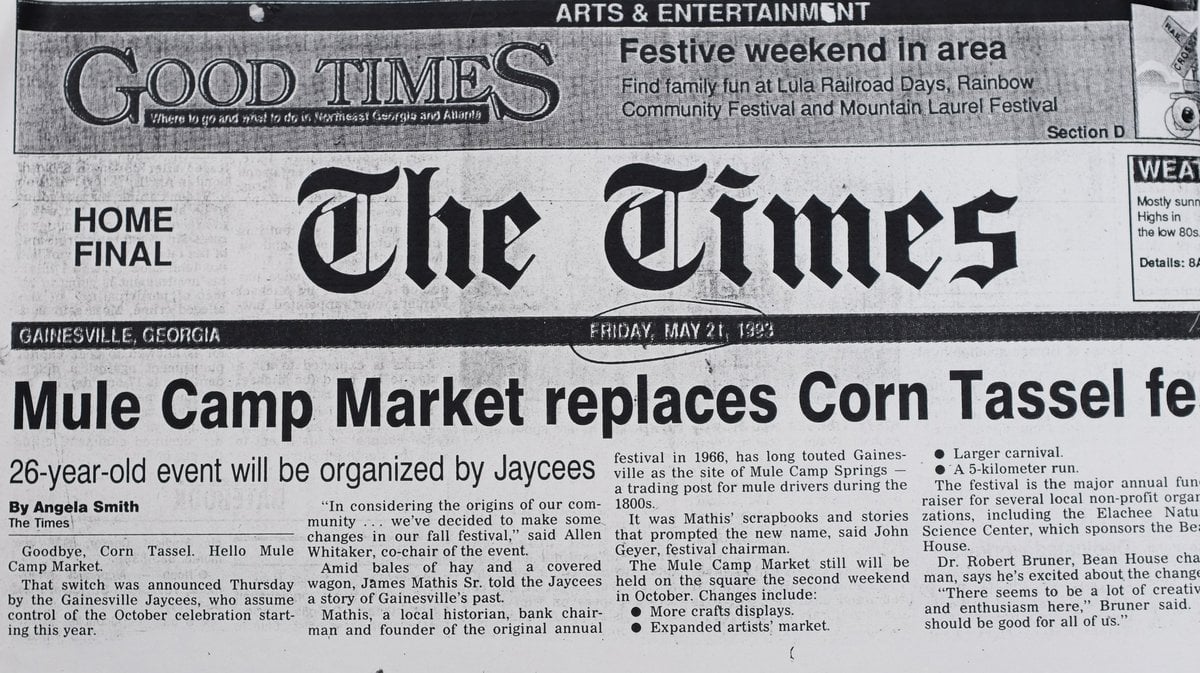 Photo by Nick Bowman, The Times

A May 1971 article for Georgia Magazine offered more apparent insight. According to the author, Mrs. James E. Bates, Corn Tassel  “murdered a white man trespassing in Cherokee country” and was promptly brought to justice after Governor Gilmer came to believe that the Supreme Court would rule against Georgia. Bates wrote that, “[The Governor] replied, with spirit, that the United States Supreme Court lacked jurisdiction and that the state of Georgia would scorn to compromise itself…  He sent a hasty message to the sheriff of Hall County instructing him to hang George Tassel immediately — which was done.”

As referenced in the photo above, in the 1990’s the Gainesville Jaycees  took charge of the festival and changed its name to ‘Mule Camp’ because, they claimed, it was discovered that the festival was named after a convicted murderer. The switch to the name of Mule Camp purportedly honors a Cherokee trading post that operated in the same place. Regardless of the name change, the celebration continues to occur at the site of an illegal execution on now-stolen Cherokee land. 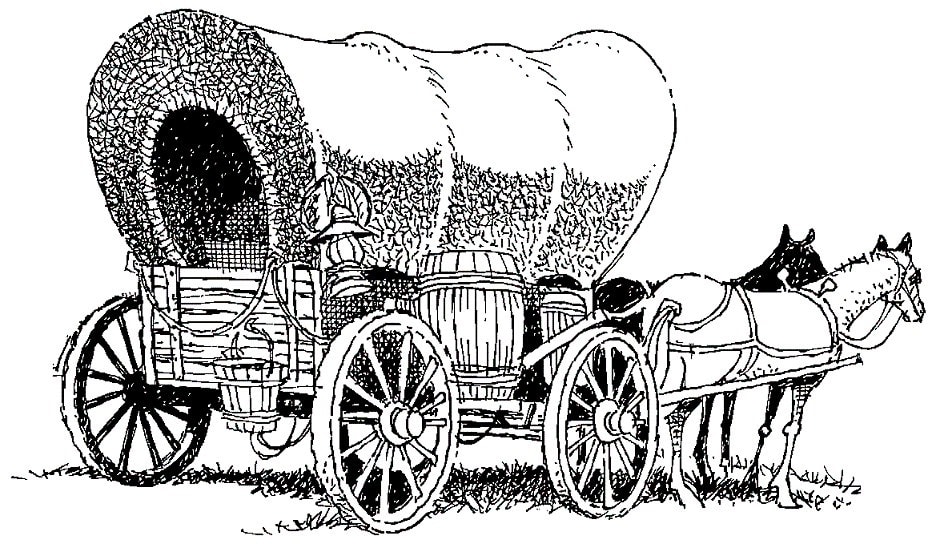 There doesn’t seem to be much room for justice in this deep red county that is well known to have a stronghold on state politics. The last governor of Georgia, Nathan Deal, also hails from Hall County, where his son sits as a Judge in the Superior Court right next to the public square of note. The Lt. Governor under Deal, Casey Cagle, is also from the same colonial jurisdiction.

Although, with the recent election of notorious wild card, Brian Kemp, the tenacious grip may soon loosen enough to have the state recognize Corn Tassel.

This would indeed be quite a twist on a road to some measure of redemption in recognizing the state’s history, proper – especially in the wake of Kemp’s scandal-ridden campaign during which he oversaw his own election as Secretary of State, his ultimate victory denying the U.S. its first Black female governor in Stacey Abrams.

In any case, the Cherokee have long memories; the true historical legacy of George Corn Tassel’s execution and the forced Cherokee removal from their homelands in Georgia won’t be soon forgotten.