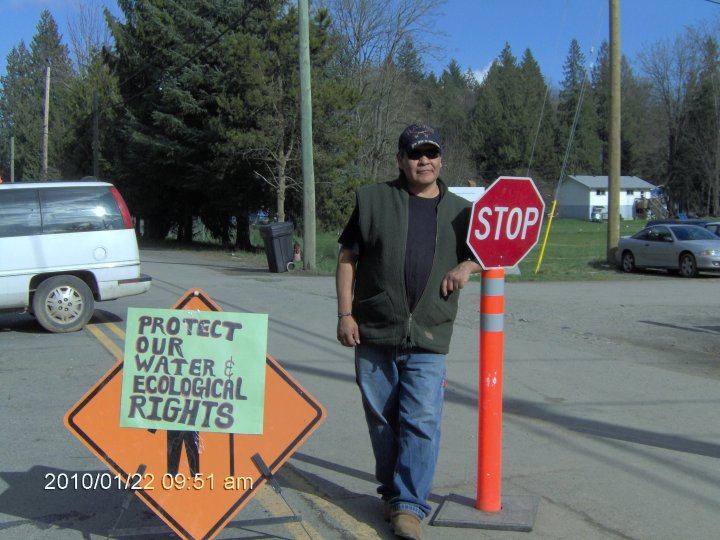 For more than two weeks now, members of the Halalt First Nation, near the southeastern coast of Vancouver Island in British Columbia, have held onto their own “protective blockade” in defense of the Chemainus River.

The blockade officially went up on February 25, just two days after the Okanagan Band launched their blockade to defend the same prescious resource: their water.

More than half the First Nation is taking part in the effort, which is centered at a portion of Chemainus Road that runs through their territory.

Leading up the blockade, in September 2009 the Halalt began seeking a judicial review concerning the water project for the town of Chemainus. The project aims to tap into the Chemainus River Aquifer, which the Halalt and others depend on.

However, despite the effort, as well as an utter lack of consulation according to the Halalt, and the absence of a Watershed management plan, the local District of North Cowichan decided to push on with their construction of the project.

Several days into the blockade, on March 3 “the Halalt First Nation held an emergency General Band Meeting where Elders and band members unanimously supported the continuation of their protest to protect the Chemainus River and their Title and Rights, explains a Press Release from the Union of British Columbia Indian Chiefs (UBCIC).

“Water is the issue,” comments Okanagan Grand Chief Stewart Phillip, president of UBCIC. “Across this province, we are seeing Indigenous Peoples defending their territory and the health of their communities. Like the Halalt First Nation, the Okanagan Indian Band is protecting the Browns Creek watershed, the source of their drinking water. Like the Halalt First Nation, the Tsilhqot’in are fighting to protect their territory by opposing the draining of Teztan Biny by Taseko Mines,” said Grand Chief Phillip. “Like the victory of the Tsay Keh Nay, who prevented the destruction of Amazay Lake from the proposed Kemess North project, the determination and the knowledge that their actions are for the health of their children’s children, will ensure that the Halalt First Nation will prevail.”

“This is a last stand for our water,” said Halalt councillor Tyler George following the March 3 meeting. “It was powerful to see so many of our young people saying that they were committed to protecting our most valuable resource.”

“Our traditional lands have been taken away. Our fish have disappeared. Our clams are polluted. But we are drawing the line at our most valuable resource. No one is going to take away our water,” said George.

For more Information and Updates, visit the facebook group P.O.W.E.R. for Halalt…Protect our Water & Ecological Rights