Five weeks of harrowing testimony from dozens of survivors and witnesses of massacre, forced disappearances and rape stand void, as Guatemala’s much awaited and watched “genocide trial” has been declared invalid.

Efraín Ríos Montt, the country’s de facto dictator from 1982-83 and his former intelligence director are being prosecuted for the massacre of 1700 Indigenous Maya Ixil people during Guatemala’s civil war.

Victims of Guatemala’s war have waited thirty years for justice, and it took twelve years to reach the debate stage. Many fear that the defendants might not live until that phase can be reached again. Investigative journalist Allan Nairn writes on his blog:

Many dozens of Mayan massacre survivors risked their lives to testify.  But now the court record they bravely created has been erased from above.

On April 18, 2013, a lower court judge Carol Patricia Flores declared all proceedings invalid due to an “apparent breach of due process.”

Judge Patricia Flores told a court in Guatemala City that the order had come from the country’s top courts to suspend the trial because she had been wrongly removed from the case, prompting complaints that the ruling made a mockery of justice.

Apparent breach of due process

Rios Montt was formally charged in January 2012 by Judge Flores, but she stood down from hearing the case until 5 weeks ago, because of her involvement in another case which also implicated Rios Montt.

In the last week, Rio Montt’s lawyers made Judge Flores the focal point of their efforts, arguing that these procedural errors meant the current trial should be annulled. On Wednesday, April 17, the defendants’ lawyers presented a writ requesting that the procedures be suspended.

A day later, Judge Flores ruled that due process was not respected and reversed the trial to the preparatory phase, meaning that the procedure is again open to appeals and that all the testimonies and expert witnesses presented in the case will have to present their evidence in court again.

But, Julio Prado, a prosecutor, believes that the Constitutional Court’s orders were to admit the trial’s evidence [es] and simply return the case to its original tribunal so the trial can proceed. 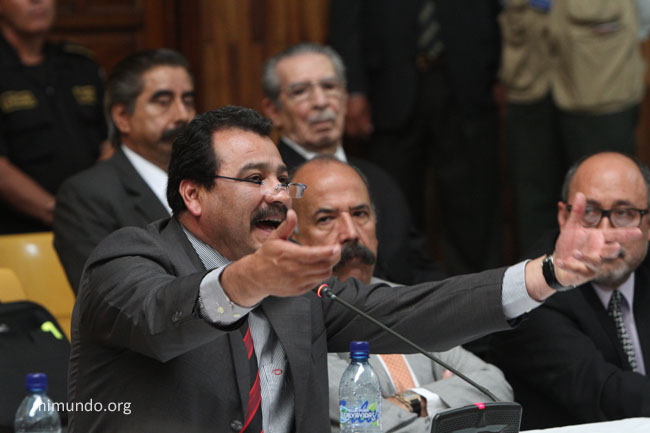 Defense lawyer Cesar Calderon–one of six lawyers representing Efrain Rios Montt and Jose Mauricio Rodriguez Sanchez–argues for a postponement of the trial which the team deems illegal during the twentieth day of the genocide trial. The defense team goes on to walked out in protest after their plea for a postponement is denied by Judge Jazmin Barrios. Photo by James Rodriguez / Mimundo.org. Used with permission. 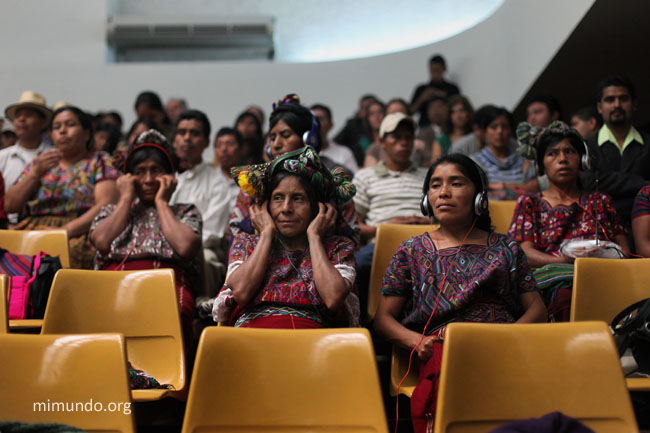 Ixil Maya women listen to the Spanish-Ixil translated courtroom proceedings during the twentieth day of the genocide trial. Photo by James Rodriguez / Mimundo.org. Used with permission.

‘Threats of violence killed the case’

Two days earlier, prominent former government officials and signatories to the country’s peace agreements which ended the civil war issued a public declaration expressing concern that the trial is threatening the peace process and dividing Guatemala.

President Perez Molina, who has also been implicated in the trial by a witness, also endorsed the statement. Molina is a former army General and the founder of Kaibil School, a soldier training school whose practices come close to torture.

Investigative Journalist Allan Nairn was one of the witnesses proposed by the accusers; he interviewed President Perez Molina in the Ixil area back in 1983. In recent days, Nairn had written a personal account of the case but “was asked to keep it private until a trial verdict had been reached.” He has now published it in his blog as “A firsthand behind-the-scenes account of how Guatemala’s current President and threats of violence killed the case”:

It would be mistaken to think that this case redounds to the credit of Guatemala’s rulers.

It was forced upon them from below.  The last thing they want is justice.

But they agreed to swallow a partial dose because political forces were such that they had to, and because they thought that they could get away with sacrificing Rios Montt to save their own skins.

I was called to testify in the Rios Montt case, was listed by the court as a ‘qualified witness,’ and was tentatively scheduled to testify on Monday, April 15.  But at the last minute was I was kept off the stand ‘in order to avoid a confrontation with the [Guatemalan] executive.

@theICTJ: Judge Flores orders that the genocide case and all proceedings up to this point are invalid. #GenocideGT

@kirstenweld: I think we all got excited and inspired by the testimonies; forgot how diabolically clever the military is. #GenocideGT

The Network in Solidarity with the People of Guatemala (@NISGUA_Guate) reported the reaction from Marilena Bustamante, sister of Emil Bustamante [es], one of the men who disappeared during the war:

@NISGUA_Guate: As court adjourns, M. Bustamante begins to yell “INJUSTICE!” Others present in audience yell, “why don’t you shoot her”

@CSORG: “I am shocked because they got this far; to have procedural issue stop trial at this state is shocking. And possibly illegal.”—@pameladyates

Journalist Xeni Jardin (@xeni), who has been following the case for Boing Boing, added:

Although the future of the whole trial is uncertain, Guatemalans are using social networks to speak their mind and to organize demonstrations online and offline using the hashtag #sihubogenocidio (Yes! It was genocide).

The following days will be crucial for the future of justice and accountability in Guatemala and abroad.